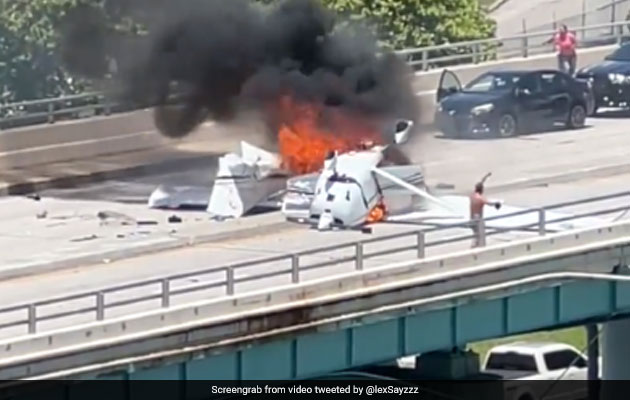 The FAA and NTSB are investigating the incident.

A private plane crashed into a highway bridge in Miami on Saturday and caught fire after colliding with an SUV. At least five people were injured and one was killed in the incident. The horrifying video was caught on camera and went viral on social media.

The video shows the small plane squashed and on fire in the middle of the roadway, sending thick plumes of black smoke.

A damaged SUV can also be seen at close range in the clip. According to New York Postthe plane hit the SUV as it landed on the Haulover Inlet Bridge on the north side of Biscayne Bay in Miami Dade County.

quote WFLA† news week reported that the private plane was carrying three passengers when it lost power and began to fall. It eventually made an emergency landing on the highway bridge and smoke from the burning plane could reportedly be seen from miles away. The SUV involved in the crash was driven by a woman with her two toddlers on board – all of whom survived and were unharmed.

Another video of the incident shows someone climbing out of the plane after it hit the ground. The person was seen running to the other side as smoke began to rise. The unidentified person also helped another man jump from the wreckage. The second man then fell to the ground and bystanders helped him drive away from the plane as the fire increased.

In a statement, the Federal Aviation Administration (FAA) confirmed that the aircraft involved was a single-engine Cessna. According to CBS Miami, the FAA has informed the plane that the plane has departed from Fort Lauderdale International Airport with its planned destination at Key West International Airport. The agency added, “The FAA and the National Transportation Safety Board (NTSB) will investigate.”

Further, according to the report, after the firefighter put out the fire, they discovered a dead person inside. Of the five people injured, two were taken to hospital for traumatic injuries. One was flown to the Ryder Trauma Center at Jackson Memorial Hospital, while the other was taken to Jackson North Medical Center. As a precaution, the mother and children in the SUV were also taken to Mount Sinai Medical Center.