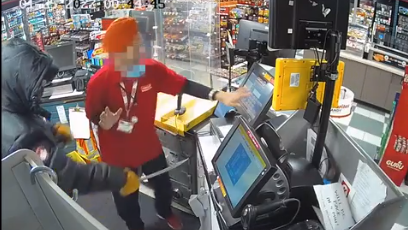 Police in Edmonton have released surveillance video of two convenience store robberies in hopes the public can help them identify a pair of suspects.

Just before 1 am on Jan. 25, police responded to reports of a robbery at the Circle K at 182 Street and 89 Avenue.

The video shows one suspect threatening the clerk with a large knife, holding it at his throat, while the other man went behind the till and stole cigarettes.

After speaking with detectives, Cheryl Voordenhout, the communications advisor with the Edmonton Police Service, said “the violence does seem to be escalating.”

“We are starting to notice more bear spray, knives, weapons being used in robberies.”

Police say shortly after the first incident, the first suspect entered another Circle K location at 172 Street and 95 Avenue. Video shows the man threatening the clerk with a knife before emptying the register into a bag, taking several packs of cigarettes before fleeing the store.

Police say the first suspect is a man between 25 and 30 years old, standing five feet 10 inches tall, weighing approximately 165 pounds. He’s described as being Asian or mixed race and was wearing a black jacket, black jeans and tan gloves, and black fabric wrapped around his face.

The second suspect is a man between 20 and 25 years old, standing at last six feet tall, with a thin build. Police say he was wearing a black baseball cap, black jacket with large white lettering on the back, black jeans, and a black handkerchief over his face.

According to Voordenhout there are a few safeguards employers can implement to ensure staff safety.

“Clerks absolutely need to cooperate with the suspects,” she said. “I know that, that’s not what we want to do but the most important thing is your life.”

“As soon as it’s safe to do so, call 911,” she continued. “Then the other thing that’s really important to do is to lock the doors, don’t let anyone else in and don’t touch anything because that’s what allows our forensic team to do their work.”

“Makes them less of an attractive target,” added Trent Bancarz, communications advisor for the Government of Alberta, Labor and Immigration.