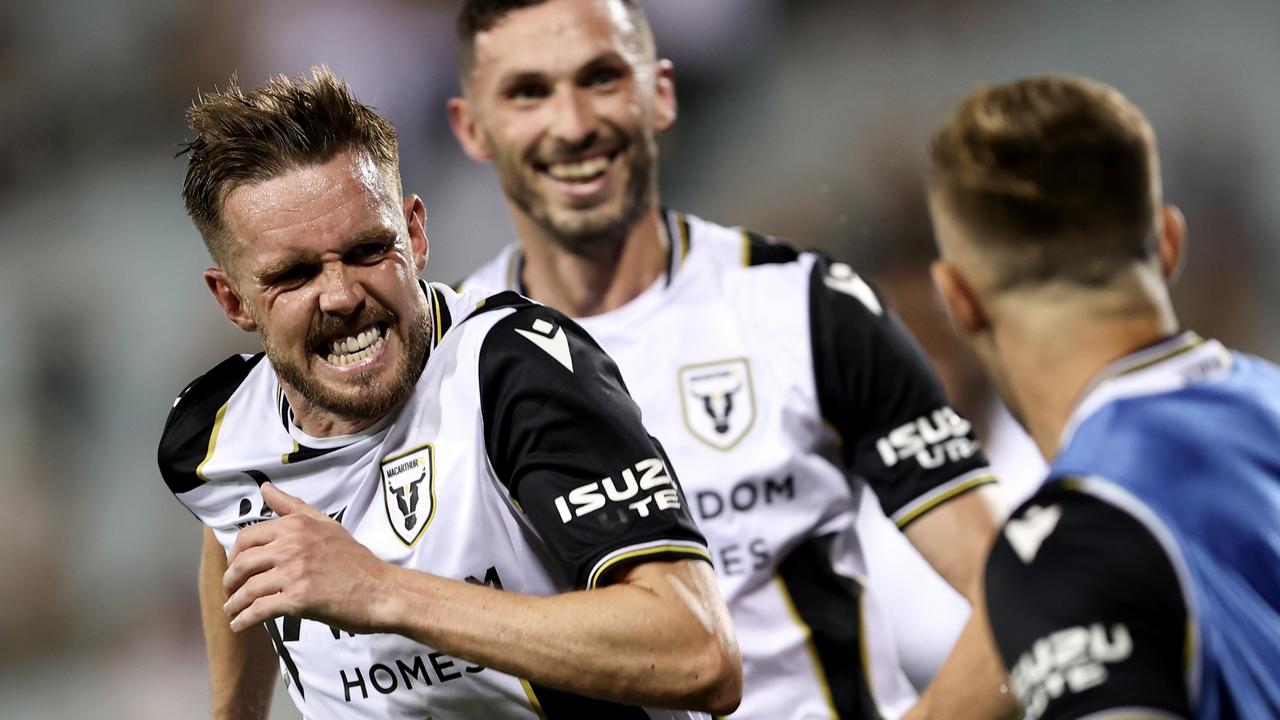 Another huge weekend of A-League men’s and women’s fixtures is in store, with some of the country’s top goalscorers hitting their straps. See our preview of every match.

It’s shaping as another crucial weekend of A-League men’s and A-League women’s fixtures.

Some of the country’s top goalscorers are lighting up both leagues and making headlines each week.

Check out our full preview of the latest round of fixtures below.

Macarthur FC will enter the premiership race should the in-form Bulls triumph over Melbourne Victory on the road.

Macarthur (third) have games in hand over Melbourne City and Western United occupying the top two spots on the table.

Tommy Oar puts his second entry for goal of the season into the back of the net in Macarthur’s recent 2-2 draw with Newcastle. Star Macarthur winger Craig Noone is coming into an excellent patch of form as the Bulls travel to face a Victory side steadying the ship. A 1-0 win over Central Coast last time out bucked a five-game winless run for Tony Popovic’s side lacking in form since their FFA Cup final triumph in early February.

Western have soared to the top of the table having conceded just 11 goals in 14 games, going seven unbeaten leading into their meeting with the Jets.

The visitors boast the scoring prowess of Georgian spearhead Beka Mikeltadze and his eight goals scored in 11 games, and creative midfielder Daniel Penha who tops the league’s assist leaderboard with seven notched from 12 games to date.

The pair lead a bright Jets attacking force eager to put Western’s defense to the test – but they must be careful going the other way: star Western recruit Aleksandar Prijović is in flying form, with four goals from his last six games.

This is the Mariners’ chance to put a worrying trend to bed.

In four of their last five A-League Men’s fixtures, Central Coast have dropped points with a goal conceded in the 90th minute or later – a pattern of late collapses which has Nick Montgomery’s side equal on points (11) with Brisbane Roar who occupy the foot of the table.

At home, against a Roar outfit heading into the weekend with three defeats from their past four games, now is the time for the Mariners to set the record straight – or risk being left dead last by the traveling Roar.

This season’s second installment of the Sydney Derby comes as both Western Sydney and Sydney FC grapple to arrest their respectively poor form slumps.

The Sky Blues head to CommBank Stadium with their place in the top six is ​​under threat from an in-form Wellington Phoenix praying to see Steve Corica’s side slip.

Mark Rudan’s Wanderers, meanwhile, have one win from five sandwiched in between two lots of back-to-back defeats. A draw – like the 0-0 affair in Round 1 – will do neither side any favors with the significance of this episode of A bitter rivalry boiling down to the need for both sides to stop the rot.

Wellington Phoenix are a team in form, rising from 12th on the table to knock on the door to the top six. Win against City, and Ufuk Talay’s team might break the hinges off the door frame.

The ‘Nix will fancy their chances against City after Patrick Kisnorbo’s side last A-League Men’s fixture: a 2-2 draw with Perth Glory in which the reigning champions squandered a two-goal lead – and the opportunity to go clear of Western United at the top of the table.

City fans will be optimistic, however, about Mathew Leckie’s form surge. With six goals in his past seven games, the star Socceroo is one of the in-form players of the competition.

Perth Glory fans, the wait is over.

Richard Garcia’s side return home after more than three months on the road, in time for just their second home fixture of the season against Adelaide on Sunday. WA lifted its border restrictions on Thursday, March 3 allowing the Glory to return to their home state to face the Reds – the team Perth last played at HBF Park on November 20, 2021.

The traveling side are buoyant after a stoppage-time goal scored by 16-year-old Nestory Irankunda sealed a 2-1 win over the Mariners, firmly entrenching Adelaide in the top four. Carl Veart’s side are favorites to take all three points against Perth, but a crowd starved of football may make a significant difference to a Perth side returning home.

Wellington hosts Perth in one of two simultaneous A-League Women’s fixtures on Friday evening set to decide which four teams progress to the finals.

Perth (fifth) play last-placed Wellington at WIN Stadium with a win the only result capable of taking Glory into the top four. Melbourne Victory would then have to lose against in-form Canberra United for Perth to snatch fourth spot and progress to the finals.

It would be an unbelievable achievement from Alex Epakis’ side, who finished bottom of the table last season without a win to their name. Wellington currently occupy that very spot on the table in 2021/22 – but could avoid this season’s wooden spoon with points earned against Perth, beginning the final round locked on points with Western Sydney.

The pressure is on the reigning champions to avoid crashing out of finals contention as a hungry Canberra United come to town.

Victory’s spot in the top four is under threat with Perth breathing down their necks; a draw should be enough for Jeff Hopkin’s side to confirm their place in the finals, but three points is the target – anything less would ensure a five-game winless run to end the regular season.

But Canberra approach their final game of the season unbeaten in three, with star forward Michelle Heyman on a tear of individual form. A season to forget is ending on a high for the team from the capital – and a statement win over a finals aspiring would breed positivity heading into the next campaign.

Cassidy Davis broke the A-Leagues record for consecutive appearances with her 109th-straight Jets outing midweek – and on Friday night the Jets legend gets the chance to celebrate that milestone in front of home fans.

No player in the A-League Men’s or Women’s has ever played as many consecutive games as Davis, with her record run stretching back to her club debut in 2013. The record extends on Friday night as Brisbane travel to No. 2 Sportsground, the visitors buoyed by a shock 2-0 win over Melbourne City in their last fixture.

It all comes down to this.

Melbourne City simply must take three points from their meeting with Western Sydney to stay in contention for the A-League Women’s premiership. City will go top by one point should they defeat the Wanderers, leaving Sydney FC the task of dispatching third-placed Adelaide United on the road on Sunday afternoon to claim top spot and the premiers plate.

Adding to the intrigue is City striker Hannah Wilkinson’s opportunity to compete for the A-League Women’s Golden Boot. Two goals behind Reds forward Fiona Worts, two goals or more from the New Zealand international will make Adelaide’s clash with the Sky Blues all the more intriguing.

Western Sydney are in free-fall, and should Wellington notch a point or more against Perth Glory on Friday Catherine Cannuli’s side will need to match that result against City to avoid the wooden spoon.

But with Fiona Worts leading the Golden Boot and fellow Reds forward Chelsie Dawber snapping at her heels, you can expect the finals-bound Reds to give the Sky Blues an almighty challenge.

Back-to-back premierships are on offer for Sydney, who could have top spot all wrapped up by the time this match kicks off, depending on the outcome of Melbourne City v Western Sydney on Saturday.

For the second time in four days, Brisbane Roar and Newcastle Jets will face off at the A-League Women’s on Monday night.

Brisbane returned to training on Tuesday, March 1 after flooding and extreme weather in Queensland which postponed a number of A-League Women’s fixtures.

Captain Ayesha Norrie says her side is “playing for pride” without finals to aspire to; a sixth-placed finish is still possible for the Roar – as it is for Newcastle with both sides locked on 10 points at the start of the weekend chasing Canberra in sixth on 11.