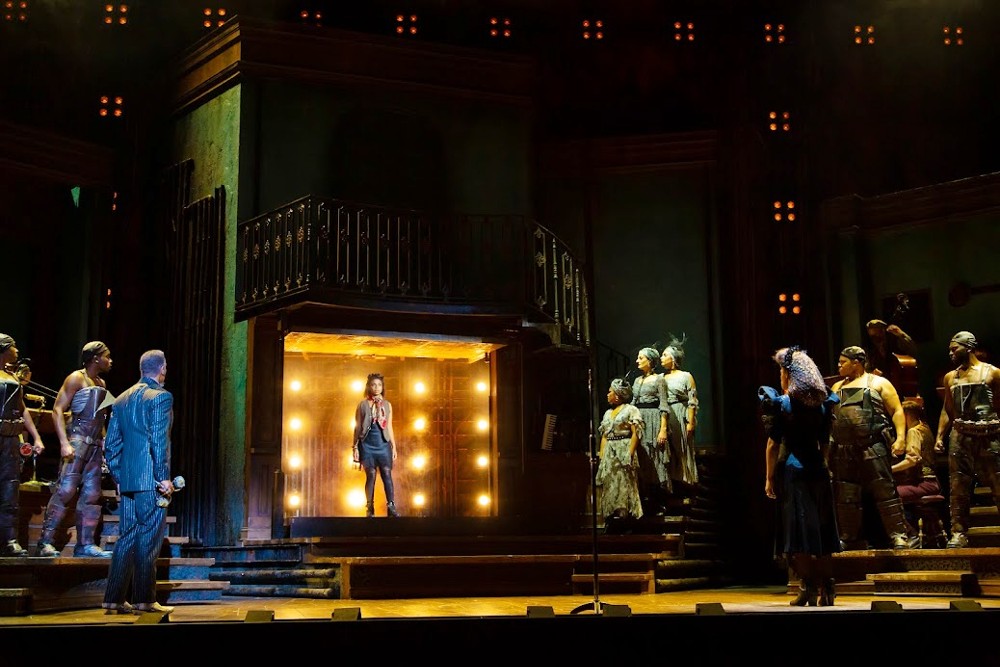 The exciting opening track introduces you to a railroad that is the road to hell. Destination: “Hadestown.”

Whether you get there by train, car, bus, trolley or on foot – get there to see the fantastic tour production of the eight-time award-winning 2019 Tony Award musical.

It’s fantastic, even with understudies in two lead roles the night I was there (Chibueze Ihuoma as Orpheus and Eddie Noel Rodríguez as Hades), performing flawlessly alongside the regular cast: the great voice Morgan Siobhan Green as Eurydice, the great Kimberly Marable as Persephone and smooth, agile Levi Kreis as our host and guide, Hermes, the messenger of the Olympian gods. Commenting (and causing trouble) everywhere are the Fates: Belén Moyano, Bex Odorisio and Shea Renne.

It’s amazing that myths like this can still affect us after thousands of years and retellings. It is clear that man has not changed that much.

But the world around us does.

So when singer/songwriter Anaïs Mitchell made a concept album around the love story of Orpheus and Eurydice, she also had climate change in mind.

In 2012, she teamed up with the wonderfully imaginative, multisensory director Rachel Chavkin (currently working on the West Coast premiere of the Broadway-bound musical ‘Lempicka’ at the La Jolla Playhouse). Together they expanded the piece and made it even more relevant to our current society.

Using the myth of the gods Hades and Persephone (king of the underworld and his kidnapped queen, who is allowed to spend half of each year above the ground, bringing spring back to the world), the creators also focused on problems surrounding climate change: poverty, hunger and mega-wealthy megalomaniacs mistreating their subordinates/employees and building walls “to keep us free and keep the enemy out” (envisioned, since Mitchell’s song “Why We Build a Wall” ten years earlier) wrote Trump did just that).

Mitchell wrote the unique, edgy and energetic music, lyrics and book (for which she won a Tony for Best Score), Chavkin is credited for ‘development and directing’ (she scored a Best Direction Tony).

Other Tonys were awarded for the exciting, dazzling lighting (Bradley King), the clear, captivating sound (Nevin Steinberg and Jessica Paz), and the wild, New Orleans-looking, rotating stage design (Rachel Hauck). Of course, the show got the Best Musical crown. And a Grammy for Best Musical Theater Album.

It’s easy to see why.

All the creative elements come together beautifully and seamlessly to tell this compelling story. But amid all the focus on power and politics, we never forget that this is truly a love story.

In this version, both Orpheus and Eurydice are poor. He may be fed by his music, but she’s hungry. He’s so busy finishing his one great song, his masterpiece, that she’s lured by Hades to the underworld, where she’s promised work and food.

What she didn’t realize is that she must give up her life and be forced into hard labor with the unlucky crowd (the excellent singing/dancing Workers Chorus).

It’s all accompanied by a magnificent eight-piece onstage orchestra, with nearly every movement accurately and skillfully choreographed (by David Neumann).

When Orpheus discovers that Eurydice is gone, he goes after her and begs Hades for her release, in the name of love. He sings his song to the weary old man, rekindling Hades’ love for Persephone. The god makes a deal: Orpheus can leave with Eurydice, but not hand in hand or side by side.

They must walk silently, one row, and if he looks back at her even once, she’s lost to him forever.

We all know how that goes and it breaks our hearts every time.

As Hermes reminds us at the end: “It’s a sad song, but we sing it anyway, as if it could end differently. We’ll keep singing it. We’re going to sing it over and over.”

The timeless story never fails to land. And the brilliant way it’s told this time around makes it worth taking a trip to hell and back.

Pat Launer, a member of the American Theater Critics Association, is a longtime San Diego art writer and Emmy Award-winning theater critic. An archive of her previews and reviews can be found at patlauner.com.