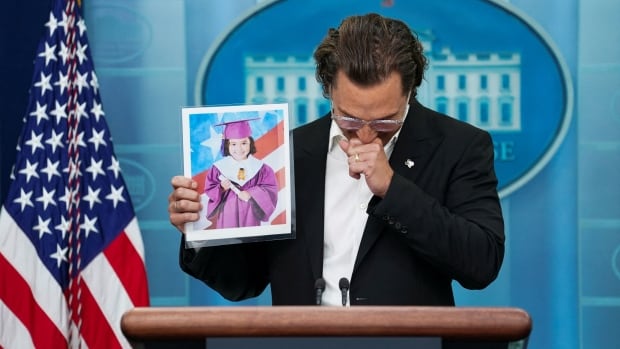 Oscar-winning actor Matthew McConaughey appeared at the White House on Tuesday to meet with US President Joe Biden and make an emotional call for gun control measures after a deadly shooting at an elementary school in his hometown of Uvalde, Texas, two weeks ago.

Nineteen children and two teachers were shot and killed at Robb Elementary School on May 24 by an 18-year-old gunman with a semi-automatic rifle.

McConaughey, 52, appeared at a press conference at the White House and appeared to choke several times.

He held up photos of some of the child victims and talked about their families, what they wore the day they were shot and what they wanted to be when they grew up.

The actor also went through a brief biography of each victim and at one point slammed his fist on the lectern to describe one of them.

“As we honor and recognize the victims, we must recognize that this time it seems like something is different,” he said.

“There’s a sense that there may be a viable way forward.”

White House Press Secretary Karine Jean-Pierre told reporters that McConaughey was at the White House “using his platform to appeal to [congressional] leaders to take two-pronged action to end senseless killing and implement reasonable gun responsibility measures that we know will save lives.”