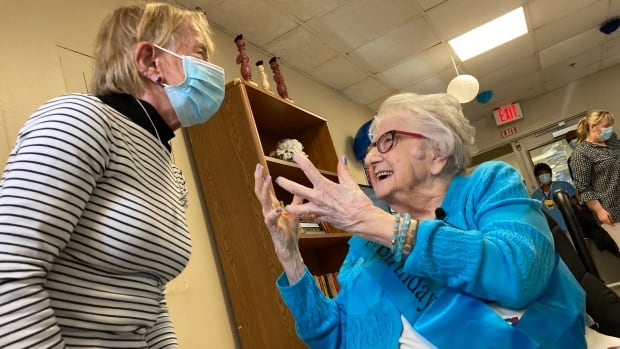 An 18-year-old Jewish refugee during the height of World War II, Gerda Cole gave her newborn daughter up for adoption — and 80 years later, the couple finally reunited just in time for Mother’s Day.

Cole’s daughter Sonya Grist, who lives in England, flew to Toronto on Saturday to reunite with her birth mother – no less on her 98th birthday – after learning she was still alive and living in Canada.

“I’m trembling,” Grist said as she waited to meet her mother for the first time.

“Just over a year ago I didn’t know my mother was still alive. I knew very little. I still don’t know much and there are a thousand questions to ask her, but I don’t want to bomb her.”

Grist, now 80, arrived in Canada on Saturday with her son Stephen Grist to meet Cole for the first time. Cole, who lives at the Revera Kennedy Lodge Long Term Care Home in Scarborough, said the plan was several months in the making after Cole’s grandson contacted the house.

The pair held onto each other, unable to let go, as Cole screamed with joy.

“When I heard it, I just couldn’t believe it,” Cole said. “This must be… a miracle. It means so much to be able to experience this moment.”

At the age of 15, Cole was sent to England by her family in 1939 to escape the persecution of Jews in her native Vienna.

Several years later, in 1942, Cole gave up her newborn daughter at age 18 for adoption due to her economic situation.

“I had very limited personal education, and this, coupled with wartime, left me with no choice but to adopt Sonya on the advice of the refugee committee,” she said. “The condition was to have no further relationship with the child.”

Cole arrived in Canada after the war and earned three university degrees, including an honors BA from the University of Toronto in Jewish studies.

Stephen Grist went through his family line last year to provide proof of Austrian ancestry so that the family can obtain Austrian citizenship when he came into contact with Cole’s stepson.

When told that Cole was alive and then 97 years old, he didn’t know how to break the news to his mother and waited two weeks before letting her know.

“I just thought oh my god, that’s just stunned,” said Stephen Grist. “The idea that her mother was still alive and that she would have the chance to meet her was so exciting that it confused us all.

“When I told my mother that… [Cole] was still alive, she just said, ‘I want to get on a plane to Canada right now and give her a big hug,'” he said.

Then he started tracking down Cole and contacted her through the care home.

Wendy Gilmour, senior vice president of long-term care at Revera, said plans to reunite the family have been in the works for several months.

“It is unbelievable the journey that all people have gone through, [Cole] and her children and her grandchildren,” Gilmour said.

Gilmour said the celebration was just what residents needed after more than two years of struggling with the impact of the COVID-19 pandemic on long-term care.

“It’s been tough, it’s been a tough time for the homes and our residents, and to have a party — something we haven’t done in a long time — brings the excitement back” into the home, she said.