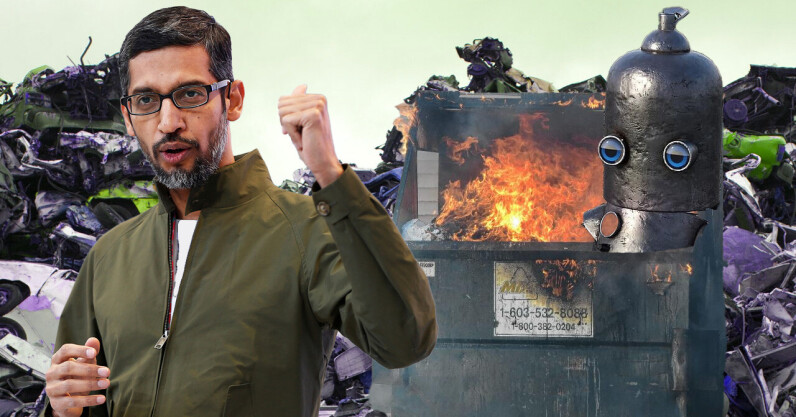 The world of AI research is in ruins. From the academics who prioritize easy-money plans over groundbreaking work, to the Silicon Valley elite who use the threat of job cuts to encourage business-friendly hypotheses, the system is a mess.

And Google deserves a lion’s share of the blame.

In the year 2000, approximately 85,000 research papers on AI/ML were published worldwide. Fast forward to 2021 and nearly twice as many were published in the US alone.

To say there has been an explosion in the field would be a massive understatement. This influx of researchers and new ideas has made deep learning one of the world’s most important technologies.

Between 2014 and 2021, big tech has almost abandoned its ‘web first’ and ‘mobile first’ principles to adopt ‘AI first’ strategies.

Now, in 2022, AI developers and researchers will be in greater demand (and pay) than almost any other technology job outside of the C-suite.

But this kind of unbridled growth also has a downside. In the struggle to meet market demand for deep learning-based products and services, the field has become as cutthroat and erratic as professional sports.

In recent years, we’ve seen the “GANfather”, Ian Goodfellow, jump from Google to Apple, Timnit Gebru and others have been fired from Google for dissent over the effectiveness of research, and a virtual deluge of questionable AI papers manage to peer review somehow.

The influx of talent that arrived in the wake of the deep learning explosion also brought with it a mudslide of poor research, fraud and corporate greed.

Google, more than any other company, bears the responsibility for the modern AI paradigm. That means we have to give big G full marks to bring natural language processing and image recognition to the masses.

It also means we can praise Google for creating the researcher-eat-researcher environment in which some college students and their high-tech professors treat research papers as little more than bait for venture capitalists and corporate headhunters.

At the top, Google showed its willingness to hire the world’s most talented researchers. And it’s also been shown countless times that it will fire them in an instant if they don’t stick to the company line.

The company made headlines around the world after firing Timnit Gebru, a researcher it hired to lead its AI ethics department, in December 2020. Just a few months later, it fired another member of the team, Margaret Mitchell. .

It is now barely a year later and history is repeating itself. Google fired another world-renowned AI researcher, Satrajit Chatterjee, after leading a team of scientists challenging another paper that Dean had signed.

At the top, this means that competition for high-paying jobs is fierce. And the hunt for the next talented researcher or developer is starting sooner than ever.

Students moving towards advanced degrees in machine learning and AI, who eventually want to work outside of academia, are expected to write or co-author research papers demonstrating their talent.

Unfortunately, the pipeline from academia to big tech or the VC-led startup world is littered with crappy papers written by students whose entire penchant is writing algorithms that can make money.

A quick Google Scholar search for “natural language processing,” for example, returns nearly a million hits. Many of the newspapers mentioned have hundreds or thousands of citations.

On the surface, this would indicate that NLP is a thriving subset of machine learning research that has captured the attention of researchers around the world.

Unfortunately, a significant amount of AI and ML research is intentionally fraudulent or contains bad science.

What may have worked well in the past is quickly becoming a potentially outdated way of communicating research.

Stuart Richie of The Guardian recently wrote an article questioning whether we should do away with research papers altogether. According to them, the problems of science are quite ingrained:

This system poses major problems. Chief among these is the issue of publication bias: reviewers and editors are more likely to write a scientific article well and publish it in their journal if it reports positive or exciting results. So scientists go to great lengths to spice up their studies, lean on their analyzes to deliver “better” results, and sometimes even commit fraud to impress those all-important gatekeepers. This drastically distorts our view of what really happened.

The problem is, the gatekeepers everyone tries to impress are the keys to future student employment and the admission of academics to prestigious journals or conferences — researchers can’t get their approval at their peril.

And even if a paper manages to pass the peer review, there’s no guarantee the people who push things through aren’t sleeping at the switch.

That’s why Guillaume Cabanac, associate professor of computer science at the University of Toulouse, set up a project called the Problematic Paper Screener (PPS).

The PPS uses automation to flag documents that may contain problematic code, math, or vocabulary. In the spirit of science and fairness, Cabanac ensures that every paper marked gets a manual review by people. But the work is probably too big for a handful of people to do in their spare time.

According to a report by Spectrum News, there are many problematic newspapers. And most of it has to do with machine learning and AI:

The screener found about 7,650 studies to be problematic, including more than 6,000 for having tortured sentences. Most of the tortured sentence papers seem to come from machine learning, artificial intelligence and engineering.

Tortured phrases are terms that raise red flags among researchers because they attempt to describe a process or concept that is already well established.

For example, using terms like “fake neural” or “man-made neural” could indicate the use of a thesaurus plugin used by bad actors trying to get away with plagiarizing previous work.

While Google can’t be blamed for everything obnoxious in the field of machine learning and AI, it has played an outrageous role in the devolution of peer-reviewed research.

This is not to say that Google does not also support and support the scientific community through open source, financial aid and research support. And we’re certainly not trying to suggest that everyone who studies AI is simply out to make a quick buck.

But the system was set up to encourage monetization with algorithms first, and to further develop the field second. To change this, big technology and academia must both commit to massive reforms in the way research is presented and assessed.

Currently, there is no widely recognized third-party paper verifier. The peer review system is more of a code of honor than a set of agreed-upon principles followed by institutions.

However, the priority is to establish and operate an oversight committee with the reach, influence and expertise to rule across academic boundaries: the NCAA.

If we can bring together a system of fair competition for thousands of amateur athletic programs, it’s a safe bet that we can form a governing body to set guidelines for academic research and assessment.

And as for Google, there’s a more than zero chance CEO Sundar Pichai will see himself appearing before Congress again if the company continues to fire the researchers it hires to oversee its ethical AI programs.

American capitalism holds that a company is generally free to hire and fire whoever they want, but shareholders and employees also have rights.

Ultimately, Google will have to commit to ethical research or it won’t be able to compete with the companies and organizations that are willing to do so.