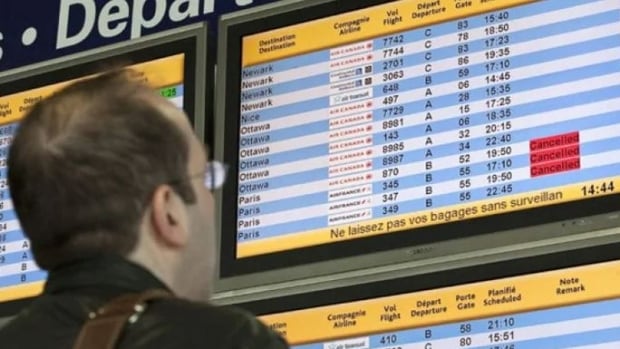 Canadians whose travel plans have been derailed by flight delays or cancellations say they are losing patience with the agency responsible for enforcing compensation rules.

The Canadian Transportation Agency (CTA) — a quasi-judicial tribunal and regulator tasked with settling disputes between airlines and customers — has fallen behind on airline passenger complaints since new regulations came into effect in 2019 requiring an airline to compensate passengers when a flight is delayed or canceled for any reason within the control of the airline.

But that backlog has increased in recent months, as a hectic summer travel season has led to an increasing number customers claiming airlines are circumventing federal compensation rules.

“The CTA will continue to deal with air passenger complaints as promptly as possible, on the basis of their merit, impartially and in a rigorous manner,” the agency said in a statement.

But those who have recently filed new complaints may be waiting a long time for a response from the agency.

Michelle Jacobs waited almost a year before hearing back from the CTA, and when she did, it was only to confirm that she was filing the application on behalf of her two children. She filed a complaint in August 2021 after Air Canada canceled the family’s flight from Deer Lake, NL, to Toronto due to staffing issues.

“It’s frustrating,” she said of the CTA process, “I mean, there are laws for this sort of thing and it seems like they’re really holding you back to see if you just leave.”

Jacobs said she had considered giving up her CTA complaint, but after being contacted by the agency last week, she now has a glimmer of hope that the case is under investigation.

Passenger considers going to court instead

Kevin Smith, who has been fighting Flair Airlines for compensation since a maiden flight from Vancouver to Ottawa was canceled on New Year’s Eve and rebooked the following day, says he has lost patience with the CTA.

Smith said he filed a complaint with the agency in early February but has not yet received a response.

While frustrated that Flair continues to deny him what he said would be fair compensation, he said the CTA’s failure to respond “makes everything worse.”

“You can’t rely on enforcement, the laws are essentially meaningless and it’s a bit like the wild, wild west,” he said.

Rather than wait for the CTA’s response, Smith said he is now considering taking Flair to small claims court, something Gabor Lukacs, founder and president of Air Passengers Rights Canada, has begun recommending to passengers. who contact him.

“A judge may or may not agree with them, but they will get a fair and impartial hearing, which is much more than they can expect from the agency,” Lukacs said.

While the CTA said it has been able to process complaints more quickly in recent years, it is currently facing a staff shortage and is trying to hire more facilitators to help resolve complaints. The government has allocated money to the CTA in recent years to help clear the backlog, including $11 million in the April budget.

At CBC’s request, Transport Minister Omar Alghabra did not say whether the government is willing to do more to ensure the CTA can clear the backlog, but said airlines must abide by the regulations.

“Travelers also have rights regarding refunds and these must be respected,” Alghabra said in an emailed statement.

But conservative transport critic Melissa Lantsman said airline passenger protections need to be strengthened as Canadians are currently being victimized by a weak system.

NDP transportation critic Taylor Bachrach agreed that regulation and enforcement need to be strengthened, arguing that the fact that there are so many complaints in the first place indicates that airlines feel they can get away with breaking the rules. .

“The biggest problem is that airlines are making fun of these passenger protection rules,” he said.

Both Lantsman and Barchrach said the government should provide the agency with the resources it needs to ensure passengers are compensated, but Lukacs said the CTA should also step up enforcement by imposing more fines when an airline violates the rules. .

Under CTA rules, airlines can face up to $25,000 per incident each time they violate air passenger protection rules, something Lukacs says isn’t used often enough.

“If airlines knew they would be fined heavily for any violation, they wouldn’t go that far,” he said.

The CTA recently announced new rules that would require airlines to provide compensation or rebooking even if a delay or cancellation is beyond their control. Lukacs said the new regulations, which will come into effect on September 8, could exacerbate the backlog.