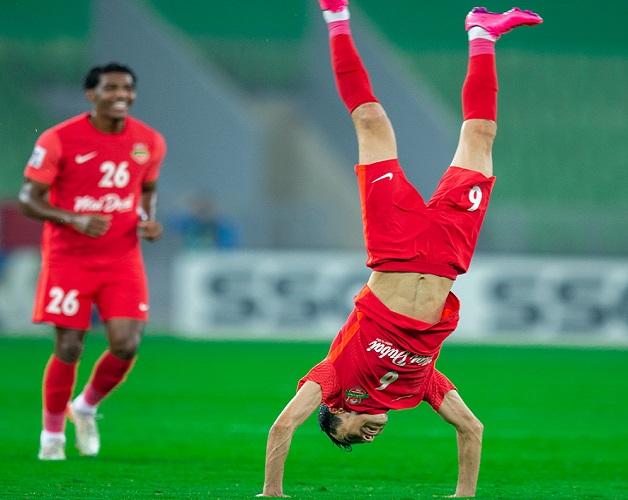 3 players from the ranks of Al-Ahly youth (Al-Forsan Al-Red) forced their presence on the ideal squad for the fourth round of the AFC Champions League group stage.

At the Prince Abdullah Al-Faisal Stadium, the Red Knights had inflicted a heavy 8-2 defeat on the Qatari Gharafa (Panthers).

The result became the biggest Emirati win in the AFC Champions League.

The ideal line-up started with Salah Zakaria, the star keeper of Al Duhail Qatar (The Red Knights), between the three blocks.

In defense, the AFC site was chosen by the Saudi Al-Hilal trio (the leader), composed of Muhammad Al-Buraik, Ali Al-Bilahi and Yasser Al-Shahrani, in addition to Muhammad Al-Damiri, the rock of the Jordanian defense unit (the green ghost).

Midfield was made up of Al-Ahly youth duo Federico Cartapia, who scored a goal against Al-Gharafa, and Aziz Jean Janiev, who secured two goals in the match.

In addition to the Red Knights’ foreigners, the ideal line-up consisted of Salman Al-Faraj and Salem Al-Dosari, the Saudi Crescent’s two stars, in midfield.