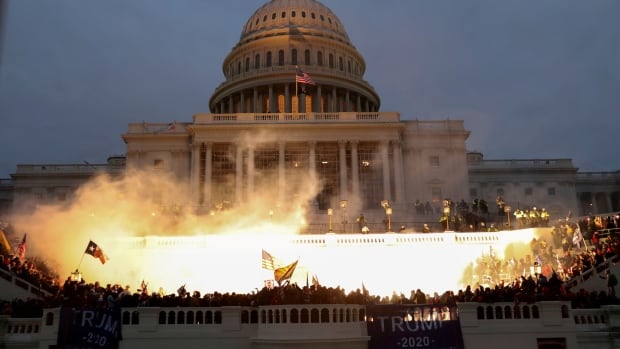 An Alabama man affiliated with the far-right Oath Keepers militia group pleaded guilty Wednesday to seditious conspiracy for his actions leading up to and through the Jan. 6, 2021, riot, making him the first person involved in the violent attack on the US Capitol to be convicted of the rarely used charge.

The sentencing guideline range for Joshua A. James, who also pleaded guilty to a charge of obstruction of an official proceeding, was estimated to be anywhere from seven and a quarter years in prison to nine years.

The 34-year-old from Arab, Ala., acknowledged getting into a physical altercation with a police officer while inside the Capitol and participating in a plan to use force to hinder or delay the transfer of presidential power.

James also agreed to co-operate with authorities investigating the riot, including testing before a grand jury.

Authorities say James and others affiliated with the group rode golf carts to the Capitol, moved through the crowd in a military-style “stack” formation and went into the building.

James was accused of pushing past officers who tried to stop rioters from moving toward the Rotunda, joining others who confronted officers and profanely proclaiming the building was his.

A week before the riot, James said in an encrypted chat that he believed teams within the militia group were adequately armed, prosecutors said in court records.

The seditious conspiracy prosecution is the boldest publicly known attempt so far by the government to prosecute those who attacked the US Capitol.

The founder of the Oath Keepers, Stewart Rhodes, and others have pleaded not guilty to seditious conspiracy and other charges.

A seditious conspiracy conviction carries a maximum penalty of 20 years, compared with five years on the lesser conspiracy charge facing other group members.

Those charged with seditious conspiracy are accused of working together to use force to stop the peaceful transfer of presidential power.

Authorities say participants discussed their plans in encrypted chats, traveled to Washington, DC, from across the country, organized into teams, used military tactics, stashed weapons in case they felt they were needed and communicated with each other during the riot on Jan. 6, 2021.

Prosecutors say the group set up a “quick reaction force,” or QRF, that kept guns at a hotel in nearby Arlington, Va., and were prepared to bring the weapons into Washington if Rhodes or associates believed the need arose.

Days before the attack, one defendant suggested getting a boat to ferry weapons across the Potomac River. In the end, the QRF teams didn’t bring guns into Washington.

At the Capitol, Oath Keepers marched in two teams in stack formation, with team members advancing forward with one hand on the shoulder of the person in front of them.

Hundreds charged in relation to riot

More than 750 people have been charged with federal crimes related to the riot. Over 220 riot defendants have pleaded guilty, more than 100 have been sentenced and at least 90 others have trial dates.

The longest prison sentence handed down so far to a Jan. 6 rioter was given to Robert Palmer of Largo, Fla.

Palmer, who was sentenced to of five and a half years in prison, acknowledged hurling a wooden plank at officers protecting a Capitol entrance, spraying a fire extinguisher, then throwing it when it was done.

Four people who attended the riot died: one, a female protester who was part of the mob that forced its way into the Capitol, was shot by a Capitol Police officer; two people died of heart failure; and one person died of an amphetamine overdose.

A Capitol Police officer who confronted the rioters died a day later after suffering two strokes. More than 100 officers were injured.

Rioters caused about $1 million US in damage.