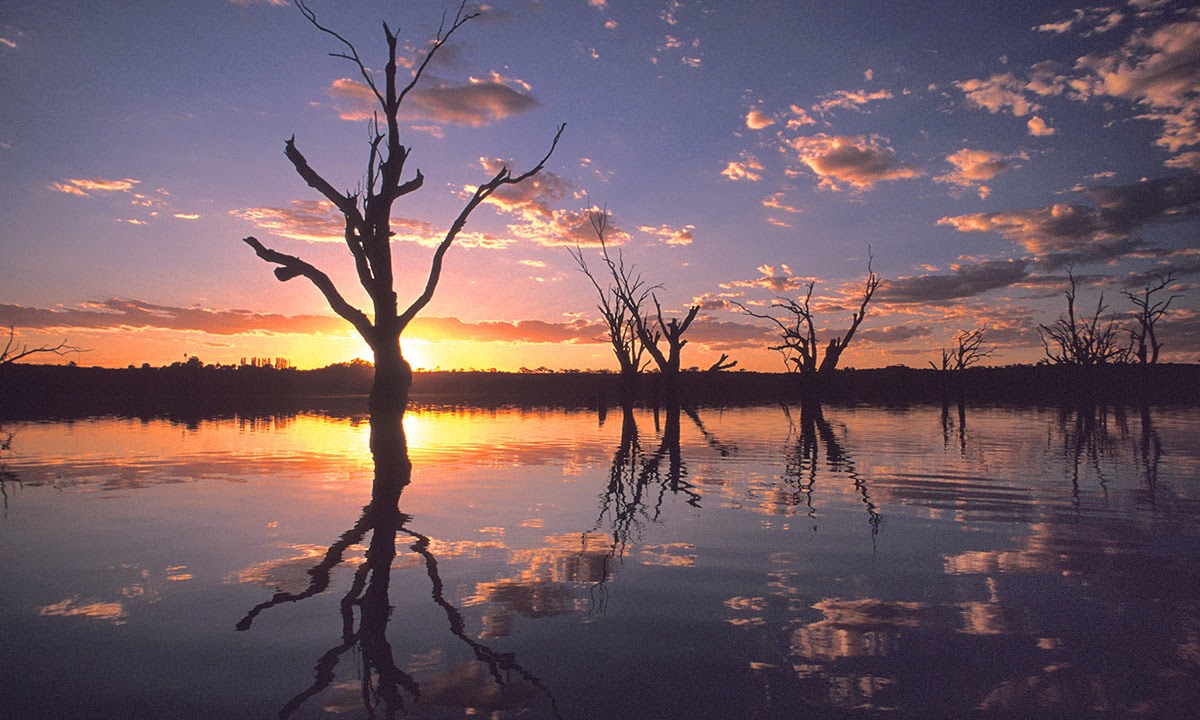 When was the last time you did nothing?

And I really don’t mean anything.

Not in the sense of going to-crap-reality-TV-vegging-nothing, nor deciding to go to sleep one morning, even when thoughts of all the things you MUST do are running around in your head.

I have to admit, I’m not very good at it.

Seems like it costs a lot to take out these days, and I’m not sure we’re better for it.

I managed to escape and go camping with the family and close friends over Easter and we went just over the border to a place where the river bends back and the gums surround you with impossibly weighted grace.

I’ve always been a beach person, chasing the sand, waves and salty hair, but recently – with help – I discovered our river.

Even the screams of children and their demand to have more time behind the boat are not enough to drown out the silence that comes, sitting on the banks, just before sunset.

And as the boats dock for the night and the sky drips in red and orange, the silence settles down and weighs you down, pressing you with comfort and breath.

I don’t know if it’s the water or the trees or even the space simplified by a certain amount of time away from work, it could even be a combination of all these things, but as much as I want to romanticize the power of nature, I also can’t help that it’s as simple as being out of range of the phone.

How ridiculous is that?

Obviously I’m not the first to write about the benefits of being away from this communication device that seems to be stuck inexorably on our ears, fingers and hips, but there’s an obvious dichotomy here.

From the moment we started moving through industrialization that was supposed to rid us of the 12-hour shifts on the factory floors, we were sold the idea that technology would make our lives easier.

Technology has freed us from the menial and physical tasks that can be replaced by robots, machines and computers, so it meant we had more time.

In the 1950s, scientists even wrote about what we would all do with our extra free time.

I’m waiting for you to stop laughing.

Yes, we had extra time, but that time filled up very quickly as we were expected and conditioned to do more by the power of acceleration.

It’s no wonder, as we all keep pushing ourselves, the idea of ​​just sitting and doing nothing is equated with a lack of ambition, boredom or a waste of time.

You can consult critical theorist Hartmut Rosa if you want more on this, but in layman’s terms we can now receive hundreds, if not thousands of instructions from headquarters at a rate measured by screeching dot-matrix printers. every day: kids texting us what they need, bosses emailing us the next task, and friends on social media pushing the next event, the next opportunity, the next picture-perfect moment, and to make it all happen together, you don’t give yourself time to catch your breath, because you have to go through more and more.

“Breaking News,” “Answer Needed ASAP,” and “Urgent” are headlines per hour, and as I sat there, surrounded by 200-year-old gums with my feet in the silty sand, it all seemed kind of perverse and silly.

The Dutch have a word for doing nothing: Niksen. From what I understand, it’s the idea that doing nothing, or at least doing something that’s useless, is actually good for you.

It has to be something without purpose and will never become productive and while there may be a temptation to put it in the mindfulness box, it is actually the opposite of that.

With Niksen, you let your mind wander where it wants to instead of delving into certain thoughts or actions, and you do it while staring out the window or doing something completely meaningless.

However, I think the big problem our Australian culture has with this is that our word for doing nothing is ‘laziness’.

We’ve built ourselves a society where huge successes are inextricably linked to this busy habit we’ve created for ourselves as we rush to prove to others, and more importantly, to ourselves that we’re okay. (Or even better, we do more than the person next to us.)

Not only that, we haven’t even made it as simple as just being busy… we have to be on purpose because even our downtime has to have a reason as we continue to run, learn a new language or even dog downwards on Instagram .

It’s no wonder, as we all keep pushing ourselves, the idea of ​​just sitting and doing nothing is equated with a lack of ambition, boredom or a waste of time.

However, my experience at Easter was nothing.

It gave me time, something I hear so often that people want more of it.

It made me float and breathe and even with the discomfort that no showers and no bed can bring, I was able to rest like I haven’t in a very long time.

Maybe we should all break the circle by planning nothing inside of us.

Then we can at least say that our schedules look busy.

Ali Clarke hosts the breakfast show on Mix 102.3. She is a regular columnist for InDaily.