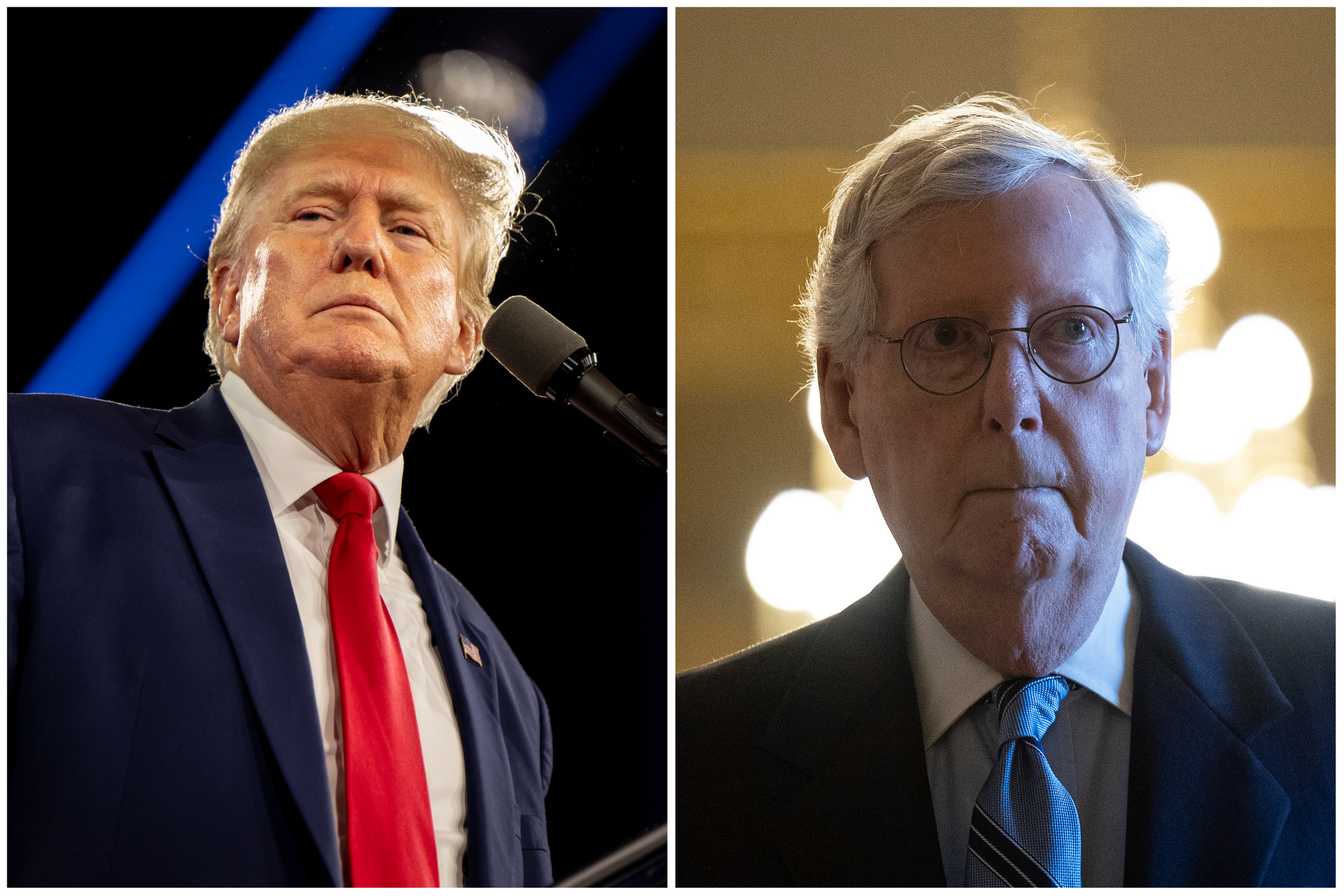 Former President Donald Trump’s Friday attack on Senate leader Mitch McConnell, in which he accused the Kentucky Republican of having a “death wish” for supporting bipartisan funding legislation, reveals a growing rift between the former allies.

Trump had an amicable working relationship with McConnell during his presidency. The two teamed up to pass legislation including the 2017 tax cuts, and McConnell overwhelmingly supported Trump’s elected judges. That relationship soured, however, after Trump’s claims of election fraud in 2020, with their tensions representing a widening Republican Party divide between “MAGA” Republicans and more traditional conservatives.

On Friday, Trump attacked McConnell for joining Democrats in backing a funding bill to prevent a partial government shutdown. The bill also included more than $12 billion to support Ukraine during the Russian invasion. It was eventually passed by the Senate with bipartisan support and was signed by President Joe Biden.

“Does McConnell approve all these trillions of dollars in Democrat-sponsored bills without the slightest negotiation, because he hates Donald J. Trump, and he knows I am strongly against it, or is he doing it because he believes in the false and highly destructive Green New Deal, and is he willing to take the country down with him?” Trump asked on Truth Social, his own social media platform.

He continued: “In any case, neither of these reasons is unacceptable. He has a DEATH WISH. He must immediately seek help and advice from his loving wife from China, Coco Chow!”

The 2020 presidential election, which Trump says had been stolen from him without evidence through widespread voter fraud, appeared to be a turning point in his relationship with McConnell.

While Trump’s allies pushed the voter fraud narrative, which was widely dismissed as unsupported by credible evidence, McConnell acknowledged President Joe Biden’s victory after the electoral college met to confirm his victory.

“Many of us hoped the presidential election would produce a different outcome, but our government system has processes in place to determine who will be sworn in on January 20. The electoral college has spoken,” McConnell said in a December 2020 floor speech. I congratulate President-elect Joe Biden.”

Trump then hit back in a tweet: “Mitch, 75,000,000 VOTES, a record for a sitting president (many). Too early to give up. Republican party must finally learn to fight. People are angry!”

Tensions continued to mount after Jan. 6, 2021, when a mob of Trump supporters rioted at the United States Capitol in a failed attempt to force Congress to block Biden’s Electoral College victory. McConnell eventually voted to acquit Trump during his second impeachment trial, but still said he was “practically and morally responsible for provoking the events of the day”.

Trump then responded with a lengthy statement attacking McConnell.

“Mitch is a stern, gruff, and unsmiling political hack, and if Republican senators stick with him, they won’t win anymore. He’ll never do what needs to be done, or what’s right for our country. Where necessary and appropriate, I will support the primary rivals who support Making America Great Again and our America First policy. We want brilliant, strong, thoughtful and compassionate leadership,” he said.

Nearly two years later, Trump and McConnell continue to bump back and forth.

In March 2021, McConnell mocked Trump for taking credit for his re-election in 2020. McConnell said in a news conference, “Yeah, well, I want to thank him for the 15-point margin I had in 2014 too.”

Last December, Trump accused McConnell of “folding” at Democrats after he struck a deal with Senate leader Chuck Schumer to end the debate over raising the debt ceiling.

“He has all the cards to win, but not the guts to play them. Instead, he’s giving away our country, just like he did with the two Senate seats in Georgia, and the presidency itself. The Old Crow is a disaster! ” Trump said in a statement. Later that month, Trump described McConnell as “the best thing that ever happened to Democrats”.

In July, Trump taunted McConnell as a “disloyal bastard” after the select House investigating the riots played clips of the senator clearing the Capitol during the uprising.

“Is this the same Mitch McConnell who was losing a lot in Kentucky, and came to the White House to beg me for approval and help? Without me, he would have lost in a landslide. An unfaithful sleaze bag!” Trump wrote on Truth Social.

Their feud has spilled over into a number of races in this year’s midterm elections, with Trump and McConnell finding themselves supporting opponents in the GOP primaries.

In the New Hampshire Senate race, Trump-backed candidate Don Bolduc defeated Chuck Morse, who received support from the GOP leadership. The Senate leadership was intended to boost Morse, who was seen as a stronger general election candidate.

McConnell has reportedly called some Trump-backed candidates “goofballs” and cast doubt in August that some of his approved candidates would triumph in key Senate races.