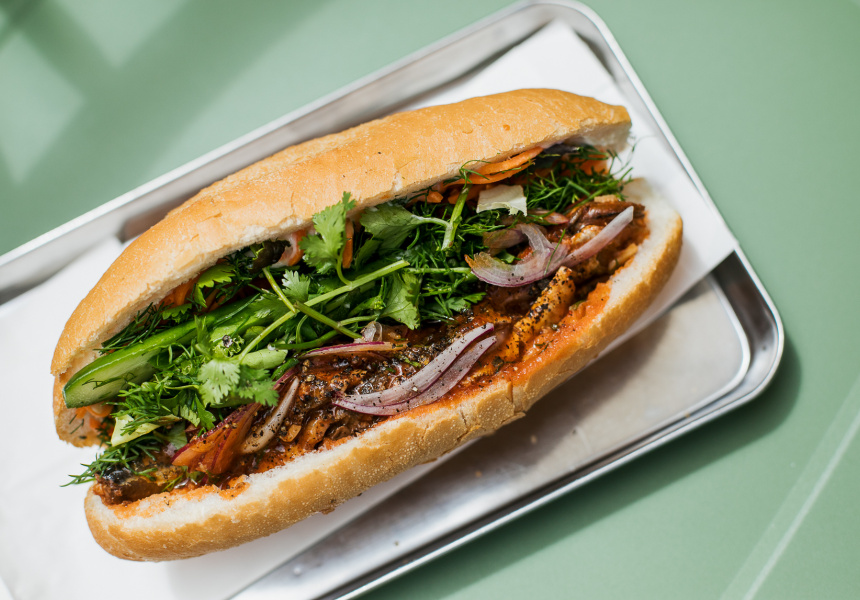 Thi Le grew up eating banh mi, so she knows a thing or two about what makes a good one. The chef and co-owner of Richmond’s modern Vietnamese-Australian eatery Anchovy has also made plenty herself, after serving takeaway banh mi during lockdowns and eventually opening a dedicated shop, Ca Com, last year.

It’s typically made with a baguette roll and liver pate (introduced to Vietnam during the French occupation), a protein of some kind, chilli sauce, pickles and fresh vegetables. But it’s more than just the sum of its parts – for Le, it’s also infused with memories.

“I think it’s personal, we’ve been having banh mi since we were kids,” she tells broadsheet† “Even growing up in Sydney, [we] would always go and get banh mi on the weekend. It’s so ingrained in our food culture.”

If you’re up for a weekend project, you can make Le’s version of banh mi with her recipe in broadsheet’s new cookbook, Home Madewhere she talks you through making your own pickles, fragrant red chilli paste and herby pork meatballs.

Or if you’d rather leave it to the experts, here are her top picks for banh mi in Melbourne.

Though the shop’s only been open since August, Ca Com has solidified itself as one of the city’s best and most unique banh mi options, thanks to the same focus on fresh produce that drives Anchovy. There’s also a strong emphasis on the heart.

“Our meat is all wood-grilled and we toast our rolls on it. One of the things when I went to Vietnam that I loved about these small banh mi shops is there’s just an auntie cooking and they have a wood grill where they toast the bread. That smell and that char with everything else – it just works so well,” Le says.

The turmeric chicken, jungle pork sausage and Manchurian pumpkin are mainstays, while specials in the past have included “banh stra-mi” with pastrami, bacon and egg, mortadella, pig’s head terrine and garfish stuffed with prawn mousse.

When you ask Le about what makes a good banh mi, her first answer is the bread.

“It shouldn’t be doughy, it shouldn’t be flaccid – it should be crunchy and it should be fresh. At the end of the day, the Viet banh mi is all about freshness. The crust is crunchy on the outside and as a whole it’s a vessel for the filling as well,” she says.

And while she doesn’t make her own bread for Ca Com, she sources it from Phuoc Thanh Bakery, which has been making banh mi in Melbourne since 1999. It’s run by a family that makes their baguette rolls fresh throughout the day to supply other businesses, as well as for their own banh mi with fillings like crispy pork, tofu, barbeque chicken and mixed ham.

“There’s a banh mi shop in Springvale,” Le starts, “but I don’t know the name.” Some quick Googling during our chat reveals it’s Minh Duc Bakery, which she usually finds by heading into the same laneway as Gong Cha.

Instead of the pork cold cuts popular in other banh mi shops, Minh Duc makes its own (one of the few that do) and uses beef instead. “In these banh mi shops there’s this miscellaneous meat that’s kind of pink or red. Traditionally it’s sour pork but [few people] actually ferment it in Australia; I think this is the [one of the] only places that does, and it’s a sour beef that goes through that fermentation process.”

At this point, Nhu Lan in Footscray is a banh mi institution – it first opened more than 26 years ago, and is a fierce contender for Melbourne’s best. Whenever she stops by, Le orders the banh mi nem nuong, or barbeque kebab roll.

“It’s like a sausage but it’s a little bit sweet, and they add crushed nuts and spring onion oil to it,” she says. Other variations include mixed ham, barbequed pork, chicken with onion and a salad roll, and there’s a selection of traditional Vietnamese desserts to take home.

“He decided to learn the craft from his parents, so now he’s a second-generation banh mi baker and he’s running the shop,” Le says. “They bake their bread throughout the day so it’s super crispy; the crust has a good structure to it – it’s different to Phuoc Thanh’s, you have to try it for yourself.”

And if you still find yourself craving a good banh mi after your self-guided crawl through Le’s favourites, maybe it’s time to give her recipe a crack at home.