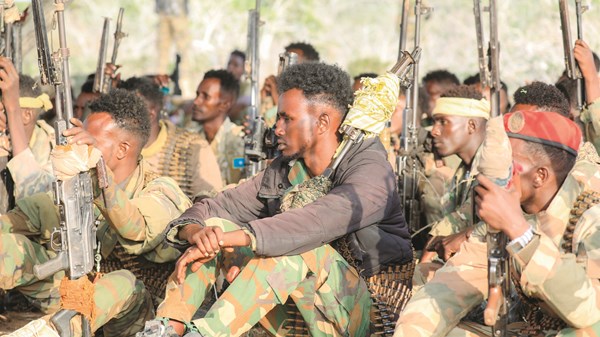 Somalia announced yesterday that more than 100 terrorist members of the “Al-Shabaab” movement loyal to “Al-Qaeda” have been killed in a military operation in an area north of the capital Mogadishu.
The Somali national news agency “SUNA” quoted Deputy Minister of Information, Culture and Tourism Abdul Rahman Yusuf as saying at a press conference that among those killed in the operation that killed the “Ail Tiri” area on the border between the governorates of “Hiran” and “Middle Shabelle” were 10. prominent leaders.
Youssef added: “The operation targeted a gathering of about 200 al-Shabaab fighters, including 12 leaders, who were preparing to attack areas the movement lost last week.”
He pointed out that the military operation was witnessed by the National Security and Intelligence Service, in cooperation with friendly forces, and stressed that this area is under the control of the military, while operations continue to pursue terrorist remnants.
He pointed out that the army units, in cooperation with the local population, managed to recapture the city of “Eil Tiri” from the grip of the movement.
He explained that the city is a strategic location for the movement of Al-Shabaab fighters between the Middle Shabelle and Hiran regions.
Photos published by local media show the massive devastation caused by airstrikes in the city during the military operation.
On the other hand, the Somali Deputy Minister of Information welcomed the increase in the number of fighters who left the movement and surrendered to the Somali army since the military operations began last August, without citing their numbers.
Al-Shabaab is bolstered by multiple sources of funding, especially piracy and criminal practices, which help it continue its subversive actions and terrorist activities. Experts in African affairs and extremist movements therefore called for economic confrontation, siege and restriction of the movement. and the drying up of funding sources.
Experts assured Al-Ittihad that the economic war against the movement has become a necessity to weaken and reduce its ability to sabotage and destroy, and emphasized the establishment of United Nations and African Union legal mechanisms to help countries that to criminalize the organization.
In mid-October, the Somali government announced several measures to dry up funding sources for the “Al-Shabaab” movement, including a ban on dealing with it, failure to fulfill its threats to provide facilities of any kind, seizing the funds of every company belonging to the movement, and terminating the commercial presence of those proven to be involved in transferring funds, and revoking the licenses of contract documentation agencies proving the organization provided with any information.
Mounir Adeeb, a researcher specializing in extremist movements and international terrorism, stressed the importance of strengthening and coordinating regional and international efforts to economically confront the “Al-Shabaab” movement and dry up its funding sources, which a real and strong start to the fight against the movement.
In statements to Al-Ittihad, Adeeb stressed that working to cut off the movement’s sources of funding will eventually lead to its collapse, provided the international community has a real will to take out the movement that has depleted Somalia and caused serious damage. inflicted.
The researcher explained that reports from the relevant authorities confirm that the sources of income of the “Al-Shabaab” movement, its capital and the permanent means of support and financing at its disposal are greater than the resources of the Somali government.
According to some reports, the movement generates a monthly income of more than $24 million through various sources, including taxes and duties on real estate and the trading of real estate and the seizure of goods in ports and roads, in addition to the money it receives from the business community. collects owners and shops.
Adeeb added that its control over the Somali south and border region has provided the terror movement with several sources of funding, as it imposes tariffs on entering and leaving Somalia, and has many coal mines under its control which it illegally sells at low prices.
He pointed out that there are countries that deal with the “Al-Shabaab” movement from a purely economic and interest point of view, and buy coal from them and not from the government, even though the United Nations and America prohibit the purchase of coal . from Somalia so that the money from these deals does not reach the movement that controls the mines.
In turn, Ambassador Ahmed Hajjaj, an expert on African affairs and former Secretary General of the Organization of African Unity (now the African Union), stressed that the economic war against the “Al-Shabaab” movement is a necessity for her ability to survive, own guns, and commit more crimes.
In statements to Al-Ittihad, Hajjaj explained that working to dry up the sources of funding for Al-Shabaab and other terrorist movements and organizations in Africa requires the establishment of United Nations and African Union legal mechanisms to criminalize anyone who engages in terrorist movements and organizations.