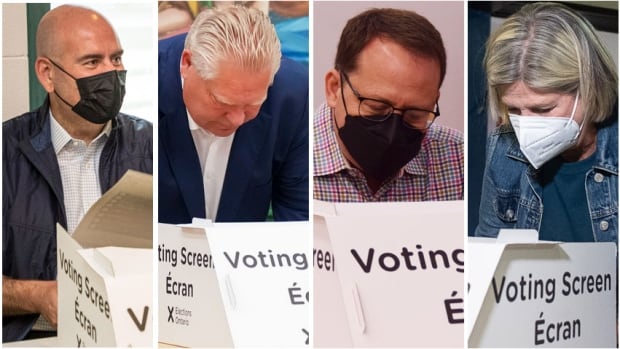 It was an important night for Prime Minister Doug Ford, who soon learned he would be returning to Queen’s Park with an even stronger mandate.

Here’s a quick look at how Ontario’s 43rd general election turned out for the reach of the major parties.

The PCs will form the government with 83 seats. That is more than the 76 stages won by the party in 2018.

Typically in provincial politics, majorities are wiped out over time. The PCs have turned that dynamic on its head.

The PCs also picked up about 41 percent of the popular vote share, a slight increase from the last election (although the overall turnout figures appear to be much lower than in 2018).

Their gains were largely at the expense of the NDP, particularly in northern, 905, and southwestern Ontario.

The Ontario NDP returns to Queen’s Park as the official opposition, albeit with fewer seats than in the last provincial parliament.

The New Democrats won 40 seats in 2018. At the dissolution of the legislature, there were only 38 after one MPP left to gain independence and another was thrown from the caucus.

The party won 31 seats on Thursday, with about 23.7 percent of the vote — not what the NDP had hoped for. Leader Andrea Horwath and her campaign had said early and often that they had a way to form a government, win just 10 key seats to overthrow Ford. That shouldn’t be.

The night of celebrations ended with Andrea Horwath winning her Hamilton Center seat announcing that she would relinquish the party’s leadership after 13 years and four elections at the helm.

VIEW | Andrea Horwath says she will resign after 4 elections:

The Hamilton politician, who won re-election on Thursday, was emotional after failing to become Ontario’s premier in her fourth bid

The Ontario Liberals had a terrible election night.

The party won eight seats, just one more than in 2018 – an election that decimated Liberals after more than 15 years in government.

That extra seat came in the traditionally liberal Toronto riding of Beaches-East York, where a former city councilor won. Liberal leader Steven Del Duca spent most of his time campaigning in Toronto, so the party’s inability to regain center seats from the New Democrats was a major disappointment.

Del Duca also lost by a large margin in his home runs to Vaughan-Woodbridge. Despite Del Duca’s insistence that he remain on as leader “whatever the outcome” on the final day of the campaign, the reality of the night made it untenable.

The poor performance of the liberals also means that the party has not achieved official party status. This entails enormous disadvantages, especially less money and no paid staff at the legislature.

After just one election, the former minister says he will step aside. He also failed to win his ride.

Leader Mike Schreiner was the only Ontario Green to hold a seat in the last provincial parliament. Despite the party’s high hopes of picking up another one this time around, Schreiner will remain a champion of one.

The party drafted a full list of 124 candidates, but the campaign team spent excessive time and resources riding Parry Sound-Muskoka.

Polls showed their local candidate there, Matt Richter, in a tight race with PC candidate and former mayor of Bracebridge, Graydon Smith. In the end it wasn’t enough.

The Greens increased their vote share across the province to about six percent, from about 4.6 percent in 2018. That was enough for Schreiner to declare that his party is here to stay.