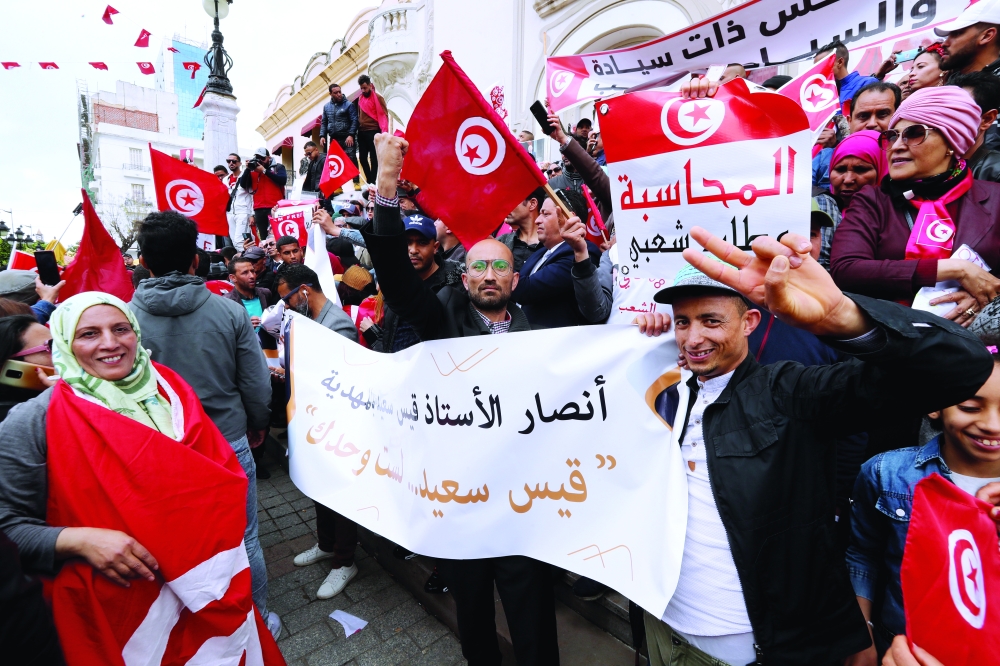 Hundreds of Tunisians demonstrated today in support of President Kais Saied and his moves to rewrite the constitution, which opponents say will consolidate the one-man rule. Protesters on Habib Bourguiba Street in the capital chanted slogans such as ‘judicial responsibility’, ‘no peace, no negotiations’ and ‘the judiciary must take responsibility’. They also raised the country’s flag, photos of President Said and banners that read “This is a historical stage, the path of correction,” “The Third Republic” and “We are all Qais Said.”

Saeed’s supporters said the president’s opponents are corrupt, and called for responsibility from the opposition parties, and their slogans are “the people want the corrupt to be held accountable”, “no to foreign interference” and “the people support Saeed in purifying the land.” Ahmed Hammami, a spokesman for the Ahrar Alliance Coordination, added: “Our message is clear: we ask Saeed to hold the corrupt accountable… The future is not for the parties that kicked the people out on July 25.”

He said: “The people hated the parties that have caused a black decade in Tunisia, and accountability is the foundation for building the new state, and we call on all forces in the country to accelerate the issue of accountability.”

Saied took over the executive branch last year, before announcing that he would rule by decree and dismiss parliament. He dissolved parliament and set a political timetable, which began in mid-January with a national electronic consultation and ends with a popular referendum on the constitution. He is currently forming a committee to draft the new constitution, which he plans to hold a referendum in the summer. Said said his steps are needed to save Tunisia from years of economic stagnation and political paralysis at the hands of a corrupt elite serving its personal interests.

A large majority of Tunisians, frustrated by years of unrest, appeared to have endorsed Saied’s measures last summer amid a deepening economic crisis. Saeed said dialogue on the political system will be limited to those who supported the July 25 trail and major organizations, rejecting calls for wider talks.

In February, Said also dissolved the Supreme Judicial Council, which had been replaced by a temporary body, and amended the law of the Independent Supreme Election Authority.