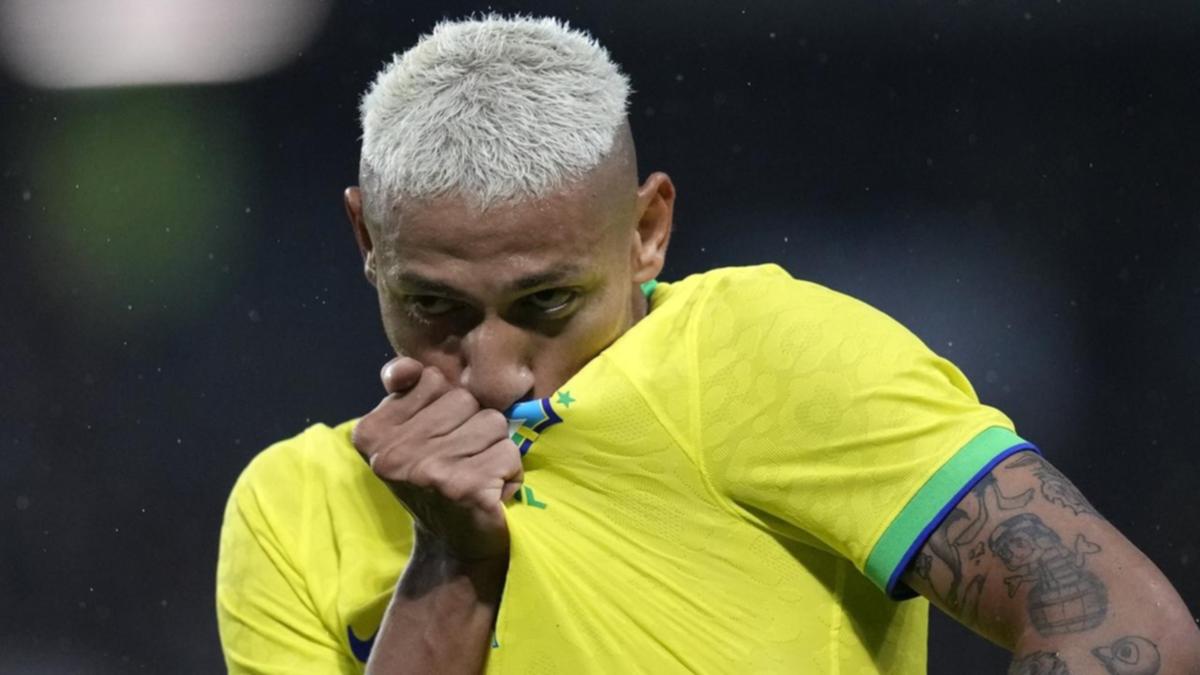 Richarlison scored twice as World Cup contender Brazil blew past Ghana with a comfortable 3-0 win in a friendly at Le Havre.

Brazil’s first-half performance gave fans plenty of reason to be excited about a young team heading to Qatar, where they will bid for a record-extending sixth title.

They dominated Ghana from the start with an aggressive press game with attacking players Vinicius Jr., Raphinha, Richarlison and Neymar providing two assists.

Marquinhos opened the score after nine minutes with a ball from a corner from Raphinha.

Richarlison extended the lead 19 minutes later with a pin-point first-time strike from the edge of the area in the bottom left corner.

The Tottenham Hotspur attacker added the third five minutes before half time with a nice header from a free kick by Neymar.

“I hope Brazilian fans believe in me more, because here in the national team I score a lot,” said Richarlison. “I wear jersey number nine and every time I wear it I score a goal. I come here and do my job quietly.”

Brazil will face Tunisia in Paris on Tuesday, their last game before their Group G World Cup opener against Serbia on November 24.

In Spain, Hakim Ziyech returned for Morocco after an absence of more than a year to help them take a 2-0 win over Chile in their World Cup warm-up at Espanyol’s Cornella-El Prat Stadium.

It was the first of two warm-up games in Spain for World Cup-bound Morocco, which will meet Paraguay in Seville on Tuesday.

Ziyech had been left out of the Moroccan team after he was accused last year by previous coach Vahid Halilhodzic of feigning injury to skip friendlies in June 2021.

Due to the deadlock between the Chelsea attacker and his national coach, he missed the World Cup qualifying campaign and the final of the Africa Cup of Nations at the beginning of the year.

But pressure on Halilhodzic to bring Ziyech back into the team, and no reconciliation between the pair, led to the coach being fired last month.

Regragui put Ziyech directly in the starting line-up on Friday with Bayern Munich defender Noussair Mazraoui, who plays for Morocco for the first time since November 2020.

Morocco will play in Group F against Belgium, Canada and Croatia at the World Cup in Qatar.

In other matches, the United States delivered a dismal performance in a 2-0 defeat to Japan in Düsseldorf, Germany, with Daichi Kamada and Kaoru Mitoma scoring.

The Americans failed to get a single shot on target in their penultimate warm-up of the World Cup.

Japan is preparing to play in their seventh consecutive World Cup.

Qatar-bound Cameroon was beaten 2-0 by Uzbekistan, while South Korea drew 2-2 with Costa Rica.

Iran defeated Uruguay 1-0 in a World Cup group with England, the US and Wales.