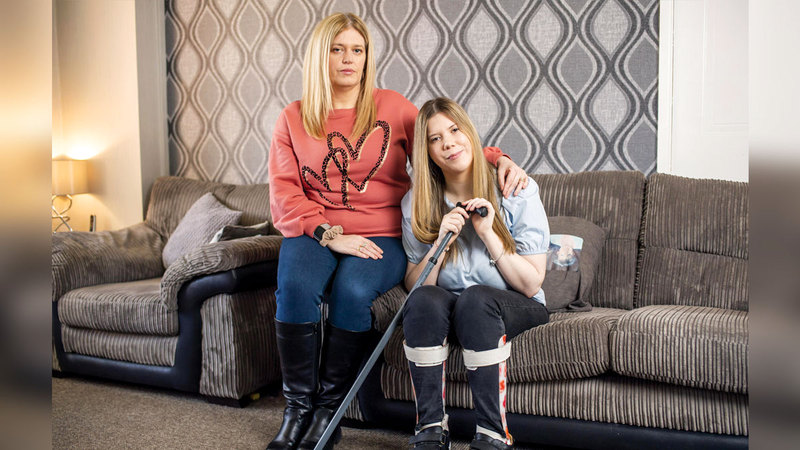 The moment she saw her newborn son Sebastian, Catherine McNamara knew something was wrong. His little hands were abnormally deformed and twisted, taking the wrong direction, and one hand without a thumb. At first, she and her husband tried not to panic when their baby was taken for X-rays and tests. “We thought what happened to the child can be resolved,” she said. But a few days later, the couple panicked when doctors told them that Sebastian’s deformities were permanent, caused by the medication McNamara was taking to control her epilepsy. McNamara burst into tears. “I felt so guilty, all I could think about was, ‘Why did you do all this to my son?'” she says.

Like thousands of women, McNamara learned from her doctor that the epilepsy drug, sodium valproate, is safe during pregnancy. “They told me everything would be fine,” she said. By the time her son was born in 2012, several warnings had been issued over the past few decades that the drug was unsafe for pregnant women.

High risk of failing to warn

The drug, which women with epilepsy have been taking for decades without proper warning, has resulted in up to 20,000 children in Britain developing autism, learning disabilities and physical deformities. Despite a 2020 report criticizing the fact that pregnant women are not informed about its risks for four decades, doctors do not properly warn pregnant women about these risks. According to the latest data published in March, 247 pregnant women were prescribed sodium valproate between April 2018 and September 2021. As a result, around six babies with malformations are born each month in the UK after being exposed to this drug. An investigation by the Sunday Times newspaper found that the drug is still being distributed to women in simple packages, without an information leaflet or warning labels.

The government is refusing to give any compensation to those affected by sodium valproate, despite an independent assessment by Tory MP Baroness Kumperleg, who concluded in 2020 that the families should be given financial compensation. Former Health Secretary Jeremy Hunt says doctors should now be banned from prescribing the drug to pregnant women, and families affected should be adequately compensated. He compared the case to the scandal of thalidomide, a morning sickness drug that caused deformities in thousands of children after it was licensed in the UK in the 1950s.

When sodium valproate was approved as a new drug for epilepsy in the 1970s, the British medical community was beset by a similar scandal, as hundreds of children were born severely deformed after pregnant women were given the drug thalidomide. There is growing evidence that sodium valproate causes not only physical abnormalities, but also neurological problems. A large study in the UK and US in 2009 confirmed that drug use during pregnancy can harm children’s IQ, and the higher the dose, the greater the harm.

More than 100 families have tried to sue Sanofi for harm to their children, but the lawsuit failed just three weeks before the lawsuit was set to begin over the withdrawal of legal aid. Janet Williams, who supported the families taking the case, despaired when she and her husband struggled with their two severely disabled sons, Lee and Philip, and the couple urgently needed financial help to care for their two sons.

“We never knew why the case failed.”

As part of a legal settlement to avoid paying fees, the parents were forced to sign an agreement committing not to sue again in the same case. After the lawsuit failed, Williams was determined to continue disclosing the effects of sodium valproate on her two sons.

As geneticists and pediatricians became increasingly convinced of the problem, their concerns reached the ears of neurologists who were already prescribing the drug to pregnant women with epilepsy. Few of these doctors read magazines about genetic dilemmas. As a result, the drug continued to be distributed to pregnant women.

Among these women is Patricia Alexander, who was advised by her doctor to continue taking a high dose of 2000 mg per day throughout her pregnancy with son Joseph in 2000, and again in 2009, when she was waiting for her daughter Amelie. During her medical appointments, she repeatedly asked if the drug was safe, and each time the specialist doctors and nurses took her concerns away. “I had no idea about valproate syndrome and no doctor had told me before,” she says.

I learned about the dangers of the drug from “Facebook”

Both Joseph and Emily were born with physical disabilities and both were confirmed to have autism. Alexandre didn’t learn about fetal valproate syndrome until years after the birth of her two children. “The first time I knew him was when I read a survey on Facebook. It was painful for me after I found out. Every difficulty my kids faced was mentioned in this survey and it was attributed to sodium valproate.”

To this day, her two children are completely dependent on her and her husband. Amelie is on crutches because of a sprained leg that may require surgery. Joseph also cannot stand or walk normally. “No one can feel our pain unless they live our lives,” says Alexander. “Nobody knows how loud my husband and I are during the day.”

A lawsuit against the manufacturer

Despite all this, the British government is refusing to reimburse the families affected. In July 2020, the then Minister for Patient Safety, Nadine Dorries, offered a candid apology to the families, saying she was “shocked but incredibly angry after reading the horrific report”, but offered no financial compensation.

The French government has already set up a fund to compensate victims. Sanofi faces a class action lawsuit in France, where more than 30,000 children are reported to have been affected since sodium valproate was licensed there in 1967. In January, a court ruled that the company was “guilty for failing to comply with warning and reporting requirements”.

Sanofi says it has fulfilled all its obligations in the UK, where in the 1960s between 9,000 and 20,000 children may have suffered more damage from sodium valproate than from thalidomide. A spokeswoman expressed her “compassion for anyone exposed to valproate and their relatives during pregnancy”, but added: “Sanofi has fully complied with its legal obligations regarding valproate, including providing product information to healthcare professionals. healthcare, professionals and patients, but don’t you think there is a strong justification for paying compensation.”

An NHS spokesperson said the agency had set up an expert group to reduce the use of sodium valproate by 50% by women of childbearing age next year, and had warned all women and girls aged 12 to 55 in England who are taking the drug, to remind them of the risks. However, the Medicines Regulatory Agency acknowledged that the warnings had not yet reached the targeted individuals.

Medicines and Health Products Dr. Alison Cave, the regulatory agency’s chief safety officer, says work is underway to ensure the safe use of sodium valproate and reduce prescriptions. She says the agency is now working to ensure that the medication is provided in its original packaging with safety information in it. She also says, “If there are any instances where this information has not been provided, we will investigate.” She adds that the drug “should not be taken by anyone of childbearing age unless they are on a birth control program, which includes the use of effective birth control.” She also emphasized that women taking sodium valproate are now required to sign annual risk confirmation forms with their healthcare provider, “because their circumstances may change in relation to the risk of pregnancy.”

• Despite a 2020 report criticizing the fact that pregnant women have not been informed about its risks for four decades, doctors do not properly warn pregnant women about these risks.