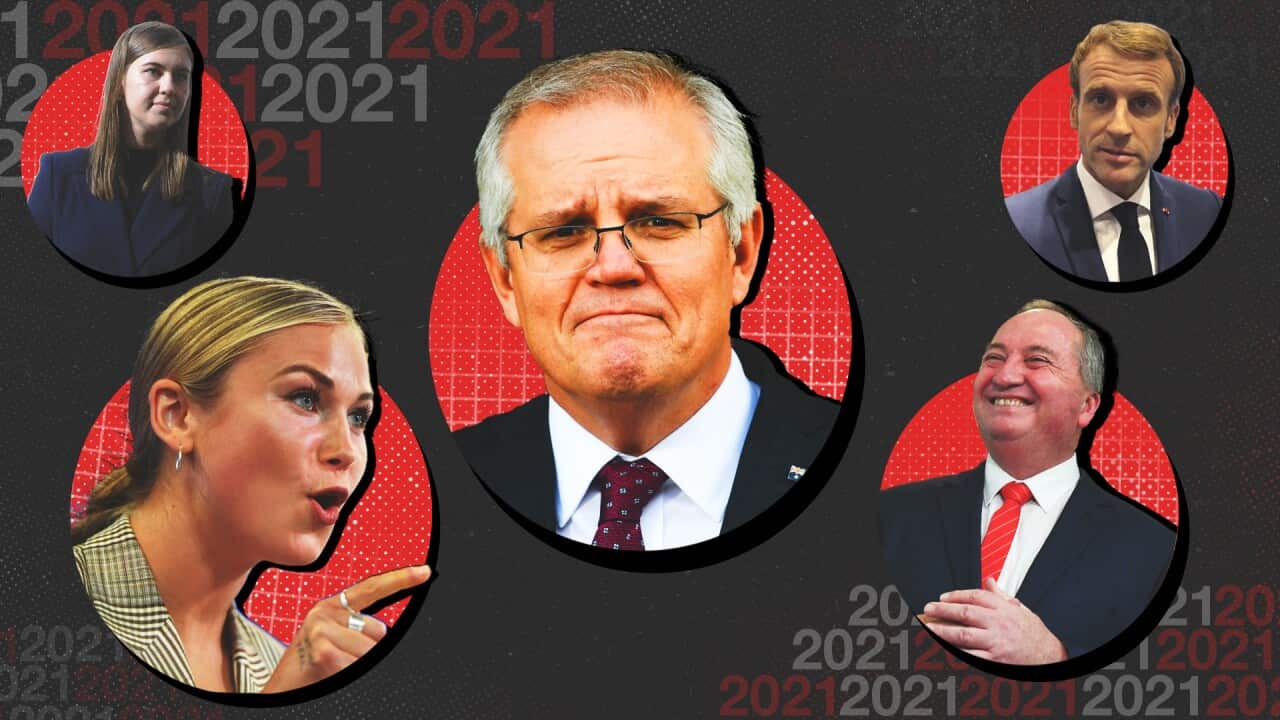 From a cultural reckoning about the treatment of women in politics, to a delay-plagued COVID-19 vaccine rollout and continued uncertainty around variants, it’s been a difficult year for Prime Minister Scott Morrison’s government to navigate.

But in Mr Morrison’s own words, he now wants the past 12 months of challenges to be left behind in the “rear-view mirror”.

The prime minister is hoping Australians will be shifting their focus through the “front windscreen” of better times ahead during the holiday season, but with a federal election set to be held by the end of May 2022, these big moments will be hard to forget .

Tame and Higgins call out Canberra

Sexual assault survivor Grace Tame being catapulted onto the national stage as Australian of the Year in January was a powerful moment in itself, but few had an understanding of how it would mark the start of a cultural reckoning that reached the highest levels of government.

It was a month later, on 15 February, when former Liberal staffer Brittany Higgins alleged she had been raped inside the office of a cabinet minister at Parliament House in 2016, citing Ms Tame as an inspiration for coming forward.

The pair became powerful advocates for women’s rights – their criticisms igniting pressure directly on the federal government to respond to concerns.

A searingly honest speech by Ms Tame at the National Press Club and Ms Higgins’ return to the lawns of parliament during a national rally on women’s rights would stand out among their public interventions.

Challenged to prove his personal recognition of Canberra’s problem with women, Mr Morrison issued a public apology to Ms Higgins over her past treatment as a staffer following the alleged incident.

But the response faced criticism for being tone-deaf

had influenced his approach to the issue.

In another perceived misstep, Mr Morrison declared it had been a “triumph of democracy” that campaigners in March 4 Justice rallies for women’s rights were able to protest without being “met with bullets”.

He later described criticism of his response as an “egregious misrepresentation”.

Mr Morrison responded to mounting demands for systemic action by commissioning an independent review into the workplace culture inside Parliament House.

Public support towards the government’s success in containing the COVID-19 pandemic was tested during 2021, amid delays in the vaccine rollout.

On July 22, Mr Morrison would admit he was sorry for the slow progress of the program, saying he took responsibility for the challenges it faced.

These included the impact of a change in medical advice around the use of the AstraZeneca vaccine as well as delays in the delivery of Pfizer supplies from overseas.

Labor leader Anthony Albanese seized on the delayed rollout, blaming the mismanagement of the program as a government failure responsible for prolonging lockdowns and border closures.

But with Australia’s vaccination rates now among the highest in the world, it remains to be seen whether Morrison has been forgiven for the delay by voters.

2021 saw by reclaiming the Nationals leadership from Michael McCormack.

His return to the helm as the nation’s deputy prime minister on 21 June came after three years on the backbench, with supporters hopeful his public recognition can cut through at the ballot box,

Separately, former Attorney-General Christian Porter announced he would retire from politics at the next election.

In March, Mr Porter publicly outed himself as the cabinet minister at the center of a historical rape allegation – vigorously rejecting the accusation.

The man once touted as a future prime minister rued the “harshness that can accompany the privilege of representing people” as he declared his intention to resign this month.

He had earlier quit the cabinet after being unwilling to reveal the source of a blind trust helping aid his legal fees in a defamation action against the ABC.

Health Minister Greg Hunt in December also announced his intention to retire at the next election, following his leadership of Australia’s COVID-19 response, with the high-profile exits coming as the Coalition faces a raft of challenges from independent candidates at the upcoming poll.

This year also set the stage for a return to the “climate wars” of Australian politics as both the Coalition and Labor backed new policy pledges.

In October, after intense anticipation, Mr Morrison finally unveiled his government’s commitment to reach the target of net zero emissions by 2050 – widely adopted by the international community.

But despite global pressure to deliver more immediate goals, the government has remained committed to its official goal of cutting emissions 26-28 per cent on 2005 levels by 2030. This was even after forecasts that emissions are expected to reduce by 30-35 per cent during this period.

On December 3, Labor unveiled its own plan to reduce carbon emissions by 43 per cent by 2030 if elected – the policy forming part of Mr Albanese’s gradual rollout of an election platform.

Australia’s historic withdrawal from Afghanistan – ending a 20-year mission in the country – was marred by the chaotic final days of evacuations in late August as allied forces assisted tens of thousands of Afghans seeking to flee Kabul.

The federal government has faced criticism for not acting sooner to secure the safety of those who served with Australian troops, despite evacuating some 4,100 people from the capital.

The Coalition has since promised an initial 3,000 humanitarian visas for people fleeing Afghanistan, but campaigners have said the real need is drastically higher.

On September 16, Mr Morrison announced a new defense pact known as AUKUS with the United States and the United Kingdom to secure Australia access to nuclear submarine technology.

The decision was made against the backdrop of increasingly strained relations with China.

But the scuttling of a previous $90 billion submarine deal with France also prompted a furious response, with the country temporarily withdrawing its ambassador from Australia.

The diplomatic tensions reignited at the G20 summit in Rome in November, where

about the abandoned deal.

More broadly, the Coalition’s management of foreign policy – usually a bipartisan area – has also become a source of political division.

Labor’s foreign affairs spokesperson Penny Wong in November charged Minister for Defense Peter Dutton of “amping up” the threat of war with China through his rhetoric to boost their election chances.

Mr Dutton defended his approach and dismissed Labor’s characterization by saying “you don’t deter an adversary and you don’t maintain peace in our region from a position of weakness”.

Calls for the government to implement a national integrity commission have remained unanswered in 2021 with Labor pointing out it’s now been more than three years since the Coalition promised to implement one.

in the final sitting fortnight – the fate of which remains to be decided.

The year ended with Treasurer Josh Frydenberg handing down a mid-year economic update with the government banking on forecast wages growth and a strong jobs outlook to bolster its election prospects.

But with uncertainty over the Omicron COVID-19 variant still hovering over Australia’s recovery – the scene is set for an election contest on who can best deliver certainty for the people of Australia moving forward.