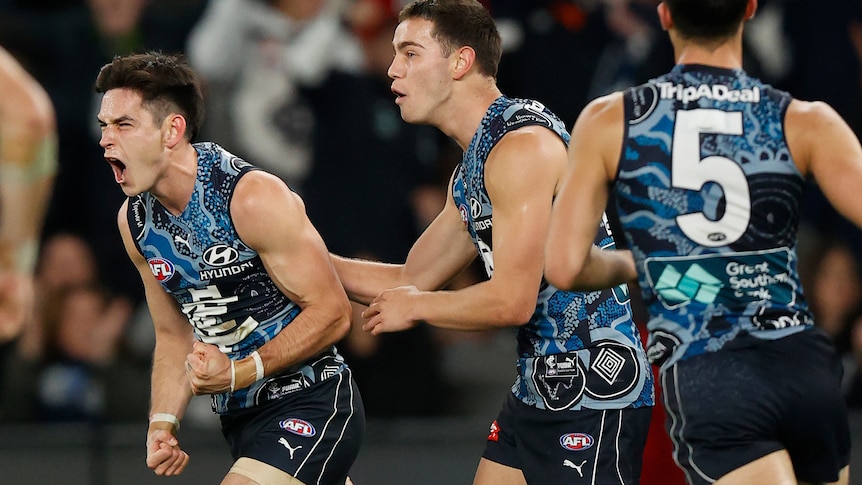 Charlie Curnow shone with six goals while Carlton survived a massive blowback to cement their hold on an AFL top four with a 15-point win over Sydney.

Despite the absence of injured spearhead Harry McKay, their brutal scoring prowess was on full display in a nine-goal second quarter that broke open the game.

But the Blues were forced to scrap when Sydney struck back and came to eight points at the end of the final term, before Zac Fisher cut a stable goal in time.

Swans co-captain Josh Kennedy will be criticized for an attempted vandalism by Sam Docherty, which tore his right hamstring.

The fumble split Docherty’s head, forced the Blues defender under the bloodline, and sparked a fierce melee as Carlton players rushed to protest Kennedy.

He sat on the ground while tending his injured leg and was eventually helped off the field by two trainers when cheers from Blues fans rained down from the stands.

Curnow earned credit for a dazzling display in which he scored five first-half goals and finished with the second greatest of his 72-game career.

The Blues’ midfield dominated the first half, leading their team to an 89-58 lead in disputed possession, which was 161-137 in their favor full-time.

The young, tall Logan McDonald was a shining light on the offense for the Swans, who started brightly and finished with three goals, while Tom Papley also set up three majors for the visitors.

Carlton made just four tackles in the opening period, but there were signs of an impending avalanche as they dominated disputed possession (42-23).

The home side narrowed Sydney’s lead to one point with the last two goals of the first term, including one on the siren to Curnow.

And the sheet pile burst as the Blues stacked up the first five goals of the second quarter before taking a 38-point lead on the main break.

Two Franklin goals helped get Sydney going in the third quarter as momentum shifted in midfield.