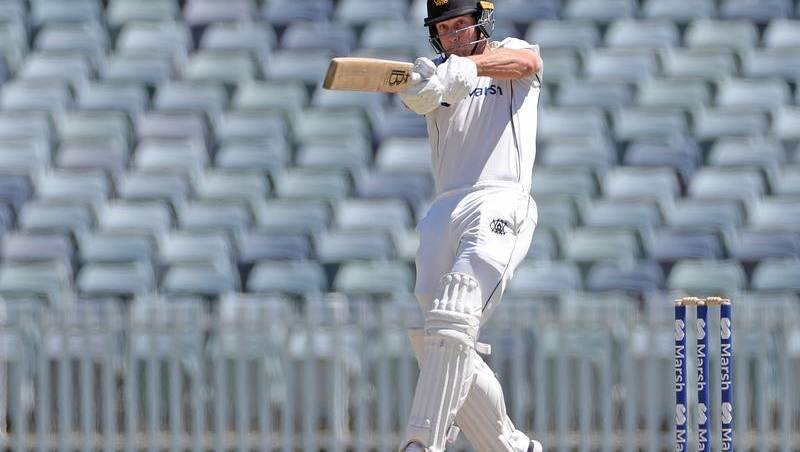 With an outright victory likely to move WA to the top of the table ahead of next week’s decider, they were firmly in control of their final-round home clash with Victoria after day 2, thanks in large part to Cartwright.

The 30-year-old former Test batsman made 109 as WA scored 337, taking a first-innings lead of 223, after they’d ripped through the Victorians for 114 on day one.

By stumps at the WACA the Vics had been reduced to 5-82 in their second innings – still 142 runs in arrears – after the WA quicks again broke through their top-order.

Cartwright’s seventh first-class ton included 14 fours and a six, continuing great form after he made 81 last time out against NSW.

He was helped by 17-year-old first-class debutant Teague Wyllie, who looked every bit ready for the No.6 job as he made 42.

His dismissal at the hands of Will Sutherland triggered a mini-collapse in which WA lost 3-15 and fell to 7-307, while the wheels fell off completely late as they lost their last three wickets for no runs.

Earlier, nightwatchman Matthew Kelly enjoyed his stint up the order, whacking 41 off 51 balls batting at No.4 for WA.

Victorian opener Will Pucovski continued his return from a concussion in his side’s second dig, but he scored only 11 runs before nicking a Joel Paris delivery to the keeper.

Travis Dean was in good touch making 29 but was bowled by Aaron Hardie, and Nic Maddinson was given lbw to Kelly for five, leaving the Vics reeling at 3-59.

Wickets in consecutive balls for Paris and Lance Morris saw them slump to 5-79, with Peter Handscomb departing after a robust 20.

Mitch Perry (0 no) and Matt Short (3 no) will resume for Victoria on day three.

Even an outright loss is unlikely to see Victoria denied a place in the final unless NSW can claim an outright win and sufficient bonus points against South Australia.