Tay-Sachs disease is a rare hereditary condition diagnosed in babies around six months of age. With a high death rate, this condition is characterized by neurological problems, when certain nerve cells or neurons die due to a deficiency of an enzyme called hexosaminidase A. This causes excessive build-up of lipids in the brain. These lipids are fatty acids known as gangliosides. When these unnecessary gangliosides accumulate, a malfunction of the central nervous system begins to occur, resulting in this condition. The most common form of Tay-Sachs disease is the infantile form, which begins in the form of impaired vision, further leading to loss of skills. Over time, babies may begin to lose full vision, with involuntary muscle spasms and stiff movements. Eventually they stop responding to their surroundings and surroundings. At the age of three to five years, life-threatening complications begin to develop, eventually leading to respiratory failure and death. There is currently no cure for Tay-Sachs, but research is underway into the causes of the condition and its decline. Extensive research is also underway into gene therapy or bone marrow transplant procedures so that Tay-Sachs treatment can be worked out in the future. 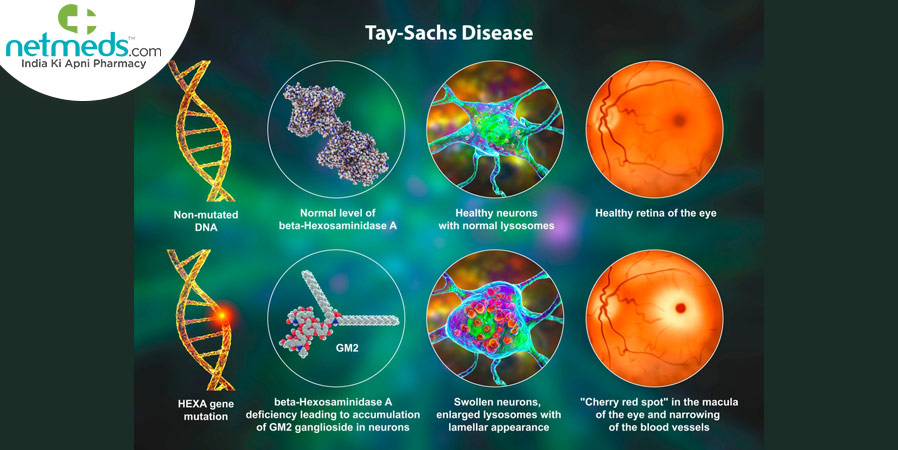 Until the age of four to six months, babies grow normally. After that, the following symptoms begin to appear:

Genes are codes that are passed on from parents to children. They are responsible for characteristics such as eye color, skin tone, blood type, hair type, and gender. Our body is made up of certain genes called HEXA. Healthy adults have two healthy versions of this gene, which instructs the body to make an enzyme known as Hex-A. this enzyme prevents the build-up of gangliosides in the brain. Even a single healthy copy of this gene is enough to make Hex-A protein. However, when babies get defective copies of the gene from both parents, they are unable to make Hex-A protein, resulting in the formation of ganglioside that causes brain damage. If both mother and father are carriers of Tay-Sachs disease, the chance that the child will be born with Tay-Sachs is more than twenty-five percent.

In the case of pregnant women: Chorionic villus sampling is done to rule out the possibility of Tay-Sachs. The doctor takes a sample of the amniotic fluid surrounding the baby and tests it. If the tests don’t find Hex-A protein, the baby is likely affected by Tay-Sachs. If the tests confirm Hex-A, the baby will not have the disease.

In the case of a newborn: In addition to checking the child’s symptoms and family history, a routine blood test is performed. Most importantly, the baby’s eyes are checked for a cherry red spot. Traces of such a place confirm Tay-Sachs.

Also Read: Chorionic Villus Sampling: Reasons For This Prenatal Test And What To Expect

There is currently no cure for this genetic disease, but there are certain programs that can help control some of the symptoms. Speech-based therapies maintain the suck-swallow reflex. When the child has difficulty swallowing, or when the child inhales food or liquid into the lungs while eating, feeding tubes are inserted. Chest physiotherapy is done that helps to break down mucus in the lungs. It can also improve respiratory health. The child’s quality of life can also be improved through proper nutrition, music, and activities to sharpen the mind.