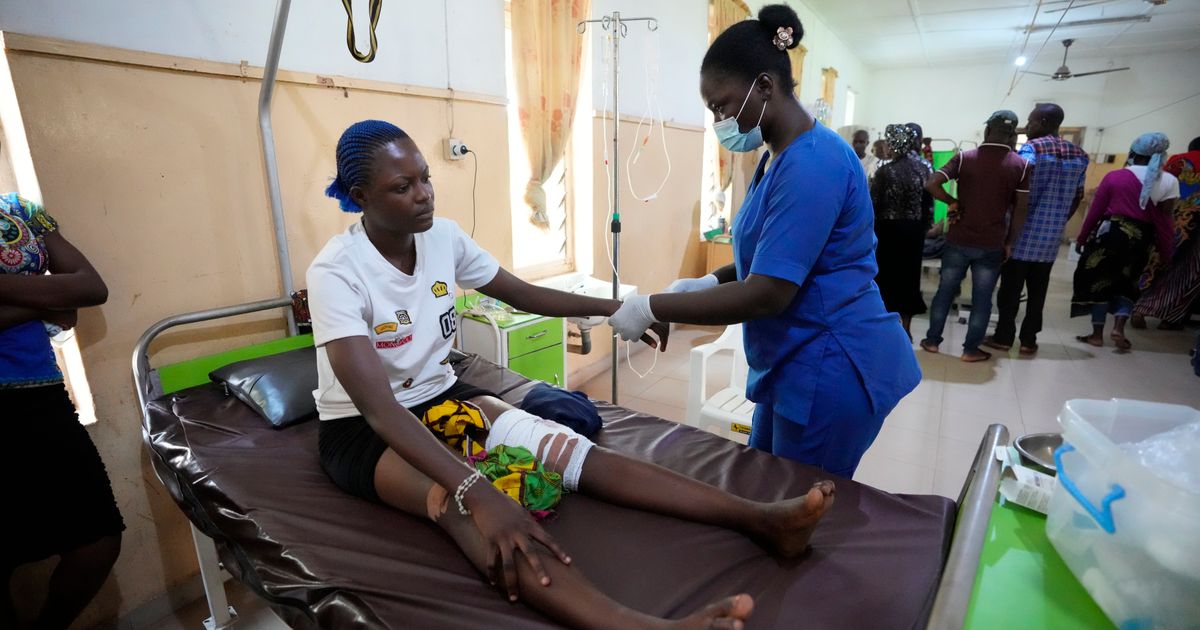 ABUJA. Nigeria (AP) – Gunmen with explosives have killed at least 38 people, including five children, in an attack on a Catholic church in southwestern Nigeria, the Catholic Diocese of Ondo state has told The Associated Press.

Some of the dead “were taken to private hospitals and we have not been able to determine the number of victims for that,” said a spokesman for Bishop Jude Arogundade of the Catholic Diocese of Ondo, suggesting the death toll could be higher.

Kadiri Olanrewaju, head of Nigeria’s National Emergency Management Services in Ondo, said earlier on Tuesday that 22 bodies were counted in the morgue, while two state lawmakers told the AP on Sunday that more than 50 were killed in the attack on St. Francis Catholic Church in Owo town in Ondo state.

Some of the bodies were taken by relatives for private funerals, residents said.

The Catholic Church in Ondo has verified the names of the 38 people taken to the Catholic Hospital and Federal Medical Center, the Ondo church spokesman told the AP.

Nigeria, the most populous country in Africa with 206 million inhabitants, has struggled for more than a decade with an insurgency in the northeast by Islamist extremist rebels of Boko Haram and its offshoot, the province of Islamic State of West Africa. The country now faces mounting insecurity problems as separatists and pirates are blamed for attacks in the south of the country, while armed groups often carry out deadly attacks in the northwest.

Before the church attack, Ondo was considered one of the most peaceful states in Nigeria. But now Owo, a small town of merchants and government workers 50 kilometers (31 miles) from the state capital Akure, is reeling from the violence of the church attack.

Ondo’s police command has not yet made any arrests or confirmed the identities of the attackers, who are said to number at least five, a spokeswoman said.

“We can only confirm that explosives were used and we found three unexploded IEDs (improvised explosive devices) at the scene,” police spokesman Odunlami Funmilayo told the AP.

“There was no warning, no threat, this place has been peaceful,” said Sunday Adewale, who works at the local chief’s palace. “They were just looking for people’s weak spots when people are relaxed.”

Ondo Governor Rotimi Akeredolu described the attackers as “bloodthirsty terrorists” who “left an unforgettable scar on us all”.

“The most unfortunate are the lives of innocent children cut down in their prime and some seriously injured by the mindless terrorists,” Governor Akeredolu said in a broadcast.

Women in the city protested Tuesday. They also demanded more security in the area.

“We are here as market women, we are here to feel sorry for the people of Owo, we have to say enough is enough,” said Yemi Mahmud, one of the protesters.

In the community “the anger is palpable … just as the urge to retaliate is strong,” said Governor Akeredolu, promising that “we will use all available resources to track down these mindless attackers and make them pay dearly.”

Lekan Oyekanmi in Owo, Nigeria contributed to this report.