Inside her glass-strewn Kyiv apartment, Alla Ragulina cries as she surveys the wreckage of a life shattered by a surge in Russian strikes on the capital.

The sheer force of the early morning blast blew out the windows and threw the 64-year-old tax service employee against a wall.

Her mother, who is blind and cannot walk, is now in hospital, one of the latest victims of a campaign of shelling that has raised fears of a Russian assault on Kyiv.

“The explosion was so big,” says Ragulina through sobs, shaking with shock after going downstairs to be comforted by other residents.

“People were sleeping, glass pieces were flying around, I was literally pushed into the wall – it’s really a miracle that nobody was killed.”

Russian forces trying to encircle Kyiv have intensified strikes on the capital, which has so far been spared the fate of devastated cities such as the south eastern city of Mariupol and Kharkhiv in the northeast.

The attacks threaten to drive still more people out of the city, from which an estimated half of its 3.5 million people have fled.

A huge crater sits at the foot of Ragulina’s block in the Podilsk area of ​​Kyiv. Police and army experts examine the remains of a missile.

Apartment after apartment inside the Soviet-era 10-storey building shows the signs of lives upended.

Some are burned out, others filled with glass and broken furniture. In one a sewing machine sits covered in debris. 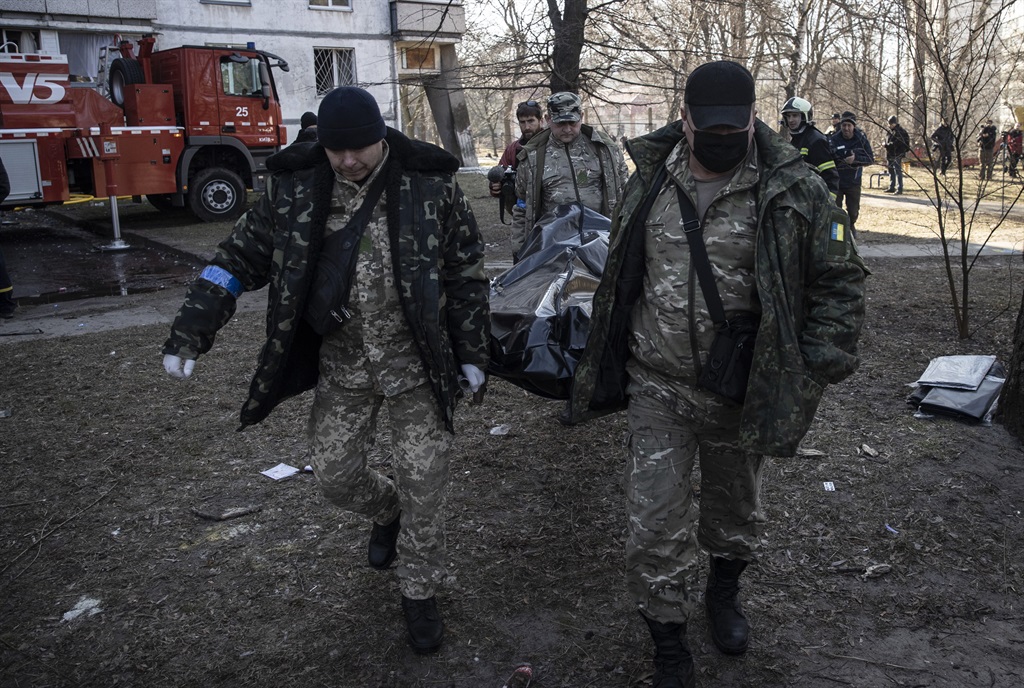 Dead bodies of civilians are being carried as firefighters extinguish fire at a damaged residential building that was hit by a Russian attack in Kyiv, Ukraine on March 15, 2022. (Photo by Emin Sansar/Anadolu Agency via Getty Images)

Some residents cleaned up the damage, knocking shards of glass out of twisted window frames, sending them crashing to the ground below.

Others are too stunned to say anything.

The apartment next to Ragulina’s place has been ravaged by fire, and the floor is ankle deep in water from where firefighters put out the blaze.

Its occupant sits by the smashed window, smoking a cigarette and staring vacantly out at the cold morning sun. A small black dog wades through the water.

“I woke up, I had a bad premonition. I wanted to get up, but the sharp blast pushed me out of bed, I fell down and cut my feet,” he said, asking not to be named.

Kyiv itself has turned into a ghost town of empty streets, checkpoints and fear as it braces for attack.

But many have no choice but to stay.

“I can’t leave this country because my oldest son is 20 and he is in the army,” says Olena Yavdoshchuk, a 40-year-old clinic manager as she sweeps up broken glass by a playground.

“So I stay here with my husband and the two younger children, aged ten and three.” Civilians are seen as evacuations continue from conflict areas on the day 19 since Russian attacks over Ukraine in Bilohorodka village near the capital Kyiv, Ukraine on March 14, 2022. (Photo by Andre Luis Alves/Anadolu Agency via Getty Images)

With Russian forces pressing in and the death toll mounting, many in Kyiv cannot understand why the west will not intervene.

They echo desperate calls by President Volodymyr Zelensky for NATO to impose a no-fly zone – a request rejected by US President Joe Biden as it could trigger World War III.

“Thank God we stayed alive, look at this,” says Nataliya, 60, a metro worker standing on her balcony.

Glass tinkles down from the floors above as she weeps, then gestures furiously at the damage to her apartment.

“Give us airplanes, close the sky! The whole of Kyiv will be ruined, and where will Putin go next?” she rages.

We want to hear your views on the news. Subscribe to News24 to be part of the conversation in the comments section of this article.