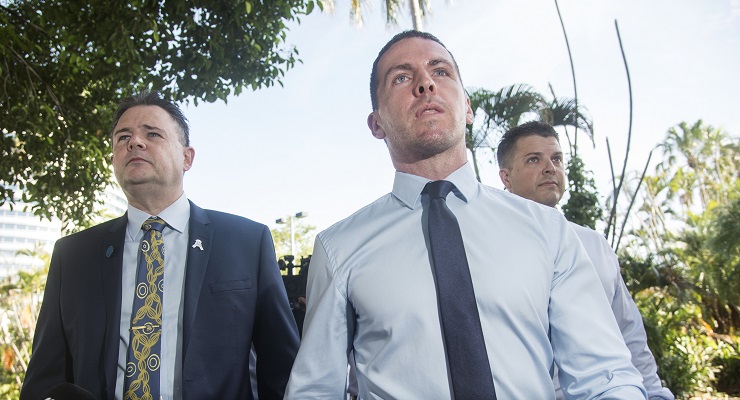 The NT corruption watchdog is considering an investigation into the decision to arrest cop Zachary Rolfe who was charged with the murder of indigenous man Kumanjayic walker19, the NT News report. Rolfe, who was arrested four days after Walker was shot dead, was found not guilty of murder last week after a five-week trial, ABC continues. This week also saw reports that one of the jurors in the case was the sibling of a police officer, which the juror flagged to the judge. They were allowed to remain on the jury, Perth Now report.

Since Rolfe’s verdict, both the NT Police Association and the NT Opposition have called for an inquiry into his judgment, the ABC continues, which some say didn’t give the police enough time to do a full investigation. The NT ICAC’s boss Michael Riches is actually pretty new to the role — he replaced ken Flemingwho removed himself from the shooting investigation after someone complained about him saying “Black Lives Matter” and that “anybody who says contrary to that is guilty of corrupt behavior”, as SBS reports.

The NT police association has rejected calls to ban guns in remote Indigenous communities, Guardian Australia reports, despite Walker’s family and Warlpiri elsewhere from the community of Yuendumu calling for the ban after Rolfe was found not guilty. It is not clear whether Rolfe will return to the force — he is back with his parents in Canberra following the decision. So what happens now? There’ll be an inquest later this year — the association’s president says it’ll give answers to both Walker and Rolfe’s loved ones, and called Rolfe, who was stabbed with a pair of nail scissors, a “victim” the night Walker died too .

Queensland Premier Annastacia Palaszczuk is under fire after urging two senior bureaucrats to “get back to work”, even though one accused the other of calling her a “bitch on a witch hunt”, The Courier Mail ($) report. Outgoing Integrity Commissioner Nikola Stepanov says she received the slur from Public Service Commission (PSC) boss Rob Setter during a call in 2018, but Setter says it didn’t happen. The PSC is responsible for the Queensland Integrity Commissioner’s budget, staffing and resources, ABC explains, and this news is just the latest in the Queensland government’s integrity crisis. An domestic violence expert has said Palaszczuk missed the mark by publicly encouraging dialogue, saying “to tell a woman to get into a room with her accuser and have a ‘full and frank discussion’ is dismissive and entirely inappropriate”, but the premier says she’s got floods to worry about.

Also under fire this morning are Labor’s so-called “mean girls” — that’s according to The Australian’s † Sharri Markson, that is. Labor senator Kimberley kitching — who died late last week — spoke to the paper in February, lifting the lid on a frosty relationship with Penny Wong† It’s surprising that Kitching would go on the record against her colleague months out from a federal election, but a big part of the “unraveling” relationship, as Markson tells it, seems to be centered around the Magnitsky laws, which Wong reportedly didn’t support at first. Kristina Keneally was another of the so-called “mean girls” according to the story — incidentally Keneally is also in news this morning after two people were charged by the AFP for threatening her online, Guardian Australia report.

Prime Minister Scott Morrison is set to announce a $234 million injection into electric vehicles in a bid to steer away from China, news.com.au reports. It’ll be funding for private projects who either dig up critical minerals or build batteries, including a $30 million investment in an NT plant set to be the “biggest non-China source of rare earths” worldwide, Energy Minister Angus Taylor says (China supplies 70-80% of global critical minerals at the moment). WA also gets a decent slice of pie, with a $119.6 grant for a material refinery hub and $49 million for a battery project.

Morrison seems keen to drum up some support in WA — he contradicted his state Liberal colleagues in commending popular Premier Mark McGowan’s decision to do a week’s worth of quarantine voluntarily when kicking off his election campaign in Perth yesterday, WA Today report. It comes as the WA Liberals leader called McGowan’s overcaution a “grandstanding stunt” on Friday. But it’s not hard to see why Morrison is singing the praises of McGowan, who has a 60% approval rating. Labor is surging ahead in three key WA seats — Hasluck, Pearce, and Swan — The West ($) report. It means Liberal MP ben Morton could lose his seat according to polling — Morton is one of Morrison’s closest allies, traveling with him for the entirety of the last federal election campaign.

ON A LIGHTER NOTE

It was Waitangi Day, a national holiday in New Zealand, and many workers across the country were enjoying the day off. The people who staff one of New Zealand’s largest city libraries were no exception — some curled up on their couches with a good book themselves, no doubt. Not that the public knew the library was closed. A technical error that secures the library’s automatic doors meant the doors swung open to the public as usual in the morning, even though not one staff member was around. So folks went in, browsed books, checked out their picks using self-serve and walked out as normal — some 147 books were checked out that day, in fact.

Book lovers walked past a huge collection of artwork and sculptures on their way out, but council says absolutely nothing was stolen. There was only one grumpy customer — a person who was looking to check out a CD too. They wrote a huffy note that read “’I’ve decided to take the CDs to teach you a lesson in how not to operate a functioning library”. The council only cottoned on to the fact the library was open after seeing some social media chatter about the flourishing honesty system, and a security guard was sent in to usher out the bibliophiles. The guy in charge says he feels grateful for the integrity of the library’s regular readers.

Hoping you see a little good in the world today too.

The PM seemed to use the Labor leader’s 18kg weight loss and new style as an opportunity for political point-scoring on Sky’s Paul Murray live show. Fair game or below the belt? You be the judge.

Black lives keep being extinguished. It cannot be right because it isn’t

“Aboriginal people know this landscape too well. It’s the three-card trick of Australian racism: ignore the intergenerational consequences of invasion, murder, dispossession and discrimination; blame the victim for his own disadvantage, laying the subtle groundwork of justification; exonerate the white population, the not-racist country we totally are and have always been.

“Yes it is true that Walker resisted judgment with violence, and that there was confusion and no doubt fear in that room where he was shot three times in rapid succession, and that the foundation for reasonable doubt could arguably be (in fact was) found . It’s not the point.”

Oligarchs Down Under: the growing number of Australian billionaires

“Australia has a similar-sized economy to Russia and in recent years we have also seen an explosion in the number of local billionaires, many of whom have benefited from government regulation or licences, particularly access to mineral resources.

“While the likes of Gina Rinehart and Clive palmer have got staggeringly rich on WA iron ore, they don’t control major ASX listed companies. However, a quick scan through the top 50 ASX listed companies by market capitalisation, as published in The Weekend Australian, reveals companies influenced by the following rich listers.”

“So far the Order of Australia honors secretariat has resisted calls to terminate Heydon’s appointment, given to only 35 people each year for ’eminent achievement and merit of the highest degree for service to Australia or humanity at large’.”

READ ALL ABOUT IT

Ukraine: What does neutrality mean, and could it lead to peace? (Al-Jazeera)

What China’s COVID uptick means for cars, iPhones and other things you buy (The New York Times†

Sept. 11 prosecutors are in plea talks that could avert death penalty (The New York Times†

Today’s disappointing federal court decision undoes 20 years of climate litigation progress in Australia — Jacqueline Peel and Rebekkah Markey-Towler †The Conversation): “The federal court today unanimously decided Federal Environment Minister sussan ley does not have a duty of care to protect young people from the harms of climate change. The ruling overturns a previous landmark win by eight high school students, who sought to stop Ley approving a coal mine expansion in New South Wales. While the judge did not prevent the mine expansion, he agreed the minister did indeed have a duty of care to children in the face of the climate crisis.

“Ley’s successful appeal is disappointing. As legal scholars, we believe the judgment sets back the cause of climate litigation in Australia by two decades, at a time when we urgently need climate action to accelerate. So why was Ley successful? The federal court’s 282-page judgment offers myriad reasons for why no duty should be imposed on the minister. But what emerges most clearly is the court’s view that it’s not their place to set policies on climate change. Instead, they say, it’s the job of our elected representatives in the federal government.”

Appeal court shuts down climate change judicial frolic — Michael Pelly (The AFR): “Yes, we believe in climate change. However, courts should not go anywhere near what is a political issue. That was the basic message delivered on Tuesday by three judges who unanimously rejected a trial ruling by Justice Mordy Bromberg that an environment minister owed a special duty of care to young people to consider climate harm when assessing projects. That decision in July last year was applauded by environmental activists. It has now been exposed as a judicial frolic.

“The plaintiff, Melbourne schoolgirl Anjalic Sharma, said she was devastated. One can understand why. Had the ruling stood, it would have been a steep hurdle for any new coal mine because of the potential liability. It would have also signalled to those unhappy with the progress of an issue, that it was OK to bypass the executive and the parliament and head straight to the courts. Don’t like the fact you lost an argument with the politicians? Have another go before a judge.”