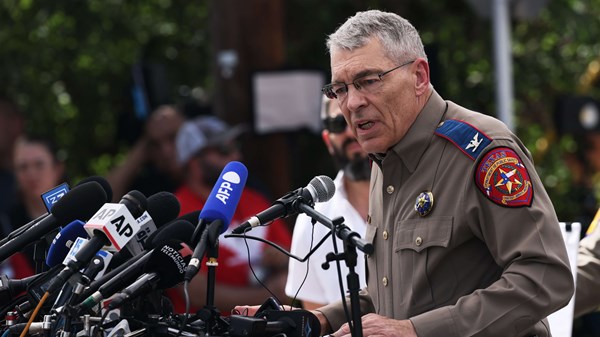 A senior official in the US state of Texas revealed on Friday that police had made a “wrong decision” not to quickly enter the Yuvaldi elementary school, where the gunman holed up and committed a massacre.
Authorities said terrified children called 911 from a classroom at the school at least six times, begging police to intervene.
“Looking back…if I sit still now, I see that the decision wasn’t right…it was the wrong decision,” Colonel Stephen McCraw, director of the Texas Department of Public Safety, told a news conference.
“As far as we know, we think it should have been introduced as soon as possible,” he added, answering questions about why police were waiting for help to enter the school.
Police received many calls from many children in the two classrooms affected, including a call from a girl at 12:16 PM, just over half an hour before police intervened at 12:50 PM.
During one of her first phone calls, the student, who confirmed multiple deaths, said, “Please, send the police now.”
But 19 police officers, on the spot, waited about an hour for a border police intervention unit to arrive after Salvador Ramos’ gunman stormed the building on Tuesday, where the 18-year-old killed 19 children and two teachers.
Urged by journalists to explain the much-criticized delay, the official said police thought “there may be no survivors”.
But during one of the calls, a female student told police that “eight to nine students are still alive,” McCraw revealed.
Released videos show parents in a frenzy outside the school begging the police to storm the building during the attack, to the point that the police had to handcuff some of them.
Standard police security protocols recommend dealing with an active school shooter without delay, which McCraw acknowledged Friday.