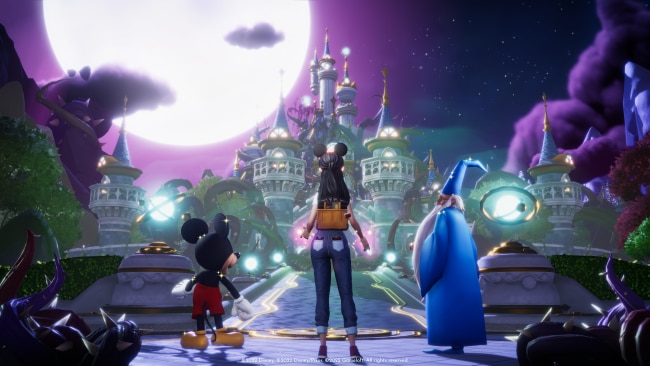 The part that everyone is covering up is the most concerning.

Last week, Disney announced something adult Disney fans have been dreaming about for a long time: a brand new game. Disney used to have a few game studios that made some of the most fun and innovative games for teens, such as the utterly brilliant Disney Infinity.

The recently announced Disney Dreamlight Valley is a life sim adventure game that looks like a lot of fun. The trailer is less than 90 seconds long and already features everyone’s favorite Disney characters and the essential trio of evil, discovery and heroism. There’s also character customization, mining, fishing, cooking, sailing, quests, a photo mode, farming, building houses, and most appealingly, a player-centered world where anyone can feel special. It seems to borrow only the best bits from popular games like Animal Crossing, Stardew Valley and of course Disney Infinity.

If it was a full AAA game – a game produced by a major publisher with a high development budget – that sold for standard console prices and then had a series of thoughtful downloadable content (DLC) expansions themed around characters or worlds, I would Being 100% on board with the wave of excitement that swept through the fandom parts of the internet. Disney actually owns all the franchises that people love, so there is so much potential that there is something for everyone in a game like this.

Unfortunately, it is a free-to-play game made by Gameloft.

That’s the part of the announcement that keeps getting obscured, and it’s the part that should concern people the most. While no details have been released on how microtransactions will work in Disney Dreamlight Valley, it’s easy to assume it will hit all of the worst free-to-play-pay-to-have-fun tropes. Those tropes include paying for energy bars, limited lives, gems, timers you can pay to speed up, premium characters and outfits, minigames you have to pay to win, and everything else that makes free mobile games terrible. These practices turn games into chores unless you’re willing to pay real money to skip inflated wait times.

You only need to look at Gameloft’s Disney Magic Kingdoms mobile game to get a sense of where this is going, and some reviews claim that kids have to spend up to $180 to complete challenges. Other reviews point to the game’s loot box mechanic – a system also known as a gacha where players pay to open game boxes containing random virtual goods – and say it teaches kids how to gamble, which isn’t great, of course.

Farming in-app purchases and life sim games are nothing new – we all remember Farmville, and some of us are still addicted to Township on mobile. But PC, Mac and console games would be better than mobile free-to-play gacha games.

Disney Dreamlight Valley was built on the shoulders of games that perfected the life-sim adventure genre, but its free-to-play model goes against what makes those other games so popular.

Here’s What Dreamlight Valley Could Have Done Instead

The Sims 1-4 continue to attract a huge audience and have such a large fan base because of the freedom within the games. You can look and do anything without your real life invading you. Yes, you can buy expansion packs, which will keep the money flowing into the developers’ pockets in the long run, but you never have to buy them if you just want to play around with what you’ve got.

That’s not the case in The Sims mobile games, where almost every action has a cost and a cooldown (the time a player has to wait before an action can be repeated) that can be skipped for real dollars, which people pay and next to nothing. yield in return. This means that you can’t just change things up and try them out like in The Sims 4, but you have to think carefully before doing anything to preserve currencies. It completely changes the nature of the game.

Animal Crossing New Horizons is the game everyone turned to for comfort during lockdown 1 in 2020. Nintendo Switches sold out worldwide and the turnip trade became such a big deal that people obsessively followed prices on Twitter. That game thrives on its connection to the real calendar and the limited-time events that keep players coming back and wanting to subscribe to Nintendo Switch Online + Expansion Pack so they can access DLC and visit friends’ islands.

Or take a leaf from the beloved indie game Stardew Valley

Stardew Valley was created by one man and became one of the most popular games of 2016. Independent developer Eric Barone has continued to provide free updates to the game, and people continue to buy and play it across multiple platforms. One thing people like about the game is its complete disconnect from the real world, and that the game doesn’t care if you play it every day, or only pick it up once a year; it is relaxing and pressure free. That’s why people flocked to it during the long, hard lockdowns of Sydney and Melbourne.

Or even follow the route developed by World of Warcraft

Another model for how this game could have been funded if Gameloft wanted to try something different than just letting people buy it or fall back on the company’s gacha practices is a subscription service. Almost everything is now a subscription service, but World of Warcraft was the true pioneer of the model in gaming charging about $20 per month. Of course, to be viable means a game needs to have consistent updates that keep players coming back.

Games like Disney Dreamlight Valley are not free to play out of the goodness of Disney and the higher management of Gameloft. It’s not that they don’t want to charge players $115 upfront and then $25 every three months for DLC because they think it’s too expensive for parents and fans to pay. It’s because they think they can make much, much more money off this vulnerable player base by charging a dollar here, ten dollars there, and it adds up to over $100+ a month.

That means all good stuff is behind a paywall, every action has a pointless cooldown that you can pay to skip. Everything is designed to be as addictive as possible and manipulated to make you want to spend that little bit more. Unless you want the game to be a chore, all the fun will be coupled with a reminder that the real world exists and is slowly trying to bleed you out.

So get excited about what Disney Dreamlight Valley could be, but brace yourself for what it likely will be.