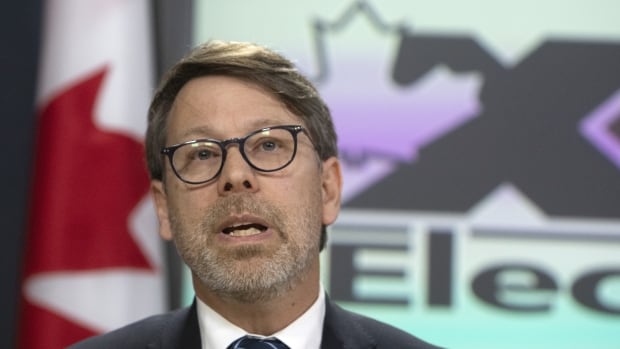 Canada’s chief election officer has released a comprehensive report on the last two federal elections calling for action to tackle hate groups, better regulation of third parties and new laws to make the spreading of election and voting disinformation illegal.

“This report … is the start of an important conversation with parliamentarians and Canadians about ways to improve our electoral process,” Stéphane Perrault said on Tuesday. “It is a crucial exercise that we must undertake periodically to ensure the vitality of our democracy in the face of changing circumstances, challenges and aspirations.”

Perrault’s report calls for an amendment to Canada’s election law to make it illegal to disseminate information that distorts an election or undermines its legitimacy.

Specifically, the report says “prohibit any person or entity, including foreign persons and entities, from knowingly making false statements about the voting process, including about voting and counting procedures, in order to disrupt the conduct of the election or the legitimacy of the election or its results.”

The report does not call for scrutiny of policy messages from candidates or parties. It says action must be taken now because the continued spread of disinformation “could jeopardize confidence in the entire electoral system on which democracies rest”.

“For me, this is about drawing a principled line in the sand,” Perrault said. “It is not okay to intentionally undermine our electoral process by spreading information that a person knows is incorrect and doing so for the purpose of undermining the process.”

The report calls on online platforms to publish policies explaining how they will tackle the spread of disinformation “which gives an inaccurate picture of election-related procedures during the election period”.

The report also calls for greater transparency in political messages from political parties, candidates and third parties, arguing that there are drawbacks to regulating only those messages defined as advertising, when social media and other online platforms can spread political messages. that do not meet that definition.

Perrault said he wants the rule requiring ads from political actors to identify who authorized the message to be simplified and extended to text messages, YouTube videos and other social media posts that can now be distributed anonymously.

All political messages must disclose their authors and tell voters how to learn more about those behind the messages, the report said

To get there, Perrault recommends that websites operated by political entities, such as political parties, candidates and third parties, be required to link to a searchable registry of paid digital communications to improve transparency.

“There is currently no mechanism to address this problem,” Perrault said. “If there is a hate group that wants to register as a party now, it could do so and gain access to a number of benefits.”

Those benefits, he said, include access to registered voter lists, free television airtime and tax credits on contributions that hate groups shouldn’t enjoy.

Perrault said voters should take such organizations to court as it is not appropriate for him or the Commissioner of Canada Elections to play a role in choosing which political parties to register.

To ensure foreign entities don’t fund third-party advertisers in an election, Perrault’s report says any third-party claiming to be self-funded must prove that it gets no more than 10 percent of its funding from donations.

Perrault said a distinction should be made between third parties — such as corporate entities and unions — that use revenue from Canada to fund political communications and smaller third parties that rely in part on donations for survival.

He said there is currently no way for the Canadian election director to track where smaller groups get their money, and that is a problem.

“What I am proposing is a mechanism to ensure that only contributions from Canadian citizens or permanent residents are used to fund third parties,” he said.

The report also calls for a number of other changes, including: