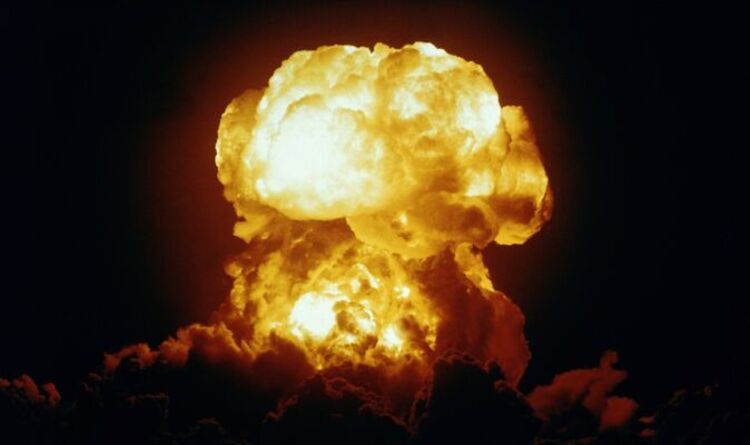 Putin has sent fears flying over a potential nuclear attack after he put his deterrent forces on “special alert”. The Russian President said he made the call perceived “aggressive statements” from the West. The US warned that there would be a “severe price” to pay after Putin sparked fears that Russia might use a chemical attack.

Russia’s Foreign Ministry claimed it found evidence of a US biological weapons program in Ukraine, which the White House believes Russia could be using as a false justification for an attack with weapons of mass destruction (WMD).

Hamish de Bretton-Gordon, a chemical and nuclear weapons and fellow at Magdalene College, has said that we are “closer to a Third World War than at any point since the Seventies”.

In December 2018, Putin cautioned that the threat of nuclear war should not be underestimated, while also elaborating on some of the potential impacts of a nuclear war.

His remarks came after the US withdrew from the Intermediate-range Nuclear Forces (INF) Treaty, which the US and Russia had originally agreed to in 1987.

But if war breaks out, what damage could Putin’s 6,000 nuclear stockpile (the world’s largest) do?

Scientists have worked out what the damage of a nuclear conflict today might look like (Image: Getty)

Putin has sparked fears that he may use a WMD (Image: Getty)

In the event of a nuclear weapons attack, contaminated populations would have to deal with subsequent radioactive fallout, which can cause tumors and birth defects.

The explosion from a nuclear blast would also create visible, infrared, and ultraviolet light waves.

These would combine to produce a kind of large, very hot fireball that’s capable of burning everything, while also causing third-degree burns within an even larger radius than the blast damage.

According to some estimates, Russia’s nuclear stockpile would cause the same amount of destruction compared to about 3 million tons (megatons or Mt) of TNT if were detonated in World War II.

Despite tensions soaring during the Cold War, no nuclear warhead was ever fired regardless of the treats amid the Cuban Missile crisis of the 1960s.

Biden has warned Putin of a “severe price” to pay (Image: Getty)

But the US has deployed its nuclear weapons before.

A total of 140,000 people in Hiroshima and 73,000 in Nagasaki died instantaneously or within five months as a result of America’s atomic bomb dropped at the end of World War II in 1945.

But if nuclear carnage broke out today, the story might be different.

But One study published two years ago looked at the likely impacts of a nuclear exchange of about 100 nuclear weapons in populated areas of India and Pakistan.

It found that each detonation was likely to incinerate an area of ​​13 square km.

While not giving a specific number, the study estimated that it would cause tens to hundreds of millions of deaths.

The experts also said that “a regional conflict using <1 percent of the worldwide nuclear arsenal could have adverse consequences for global food security unmatched in modern history”.

A 2014 study, using the same scenario, found that it would cause “widespread damage to human health, agriculture, and terrestrial and aquatic ecosystems” and may trigger “a global nuclear famine”.

Another study back in 2008 looked at the impacts of a Russia-US nuclear war outbreak scenario.

It envisaged that Russia would target 2,200 weapons to be used on the West.

Potential bases Russia could target in the UK (Image: Express)

And it imagined that the US would target 1,100 weapons on China, and the same amount on Russia.

The study estimated that it would cause 770 million direct deaths and generate 180 Tg of soot from burning buildings and trees.

That is the same as around a fifth of the US’ entire population.

A 2019 study also tipped that the nuclear war would trigger a nuclear winter, with temperatures staying below freezing across the Northern Hemisphere even over summer and would stay that way for several years.

It also tipped that 150g of deadly soot would enter the atmosphere.

With even more nuclear warheads in the countries’ arsenals in real life than were used in the studies, it could be expected that a nuclear conflict could push humanity near the brink of collapse.

But while some humans would be able to survive in the doomsday scenario and would eventually to repopulate the planet, the majority would suffer horrific deaths, according to Mark Lynas , author of Six Degrees: Our Future on a Hotter Planet.