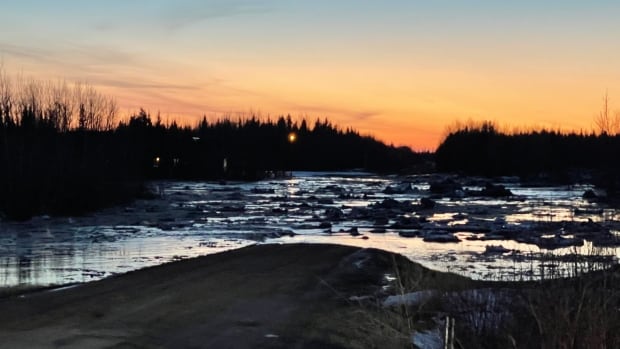 Tuesday at 11:45 PM MT, an evacuation order was issued for the entire community of Hay River, NWT, asking residents to move to higher ground or the community center.

“Residents can also travel by road to Enterprise and wait there for more information,” reads a Facebook post from the Town of Hay River.

Those requiring transportation assistance are asked to call 833-699-0188. People leaving the community are requested to register at the same number or on the municipality’s website.

Those going to Yellowknife are asked to go directly to the Multiplex at 41 Kam Lake Road.

The community-wide order of about 3,500 came days after flooding hit the small satellite community of Paradise Gardens and threatened Old Town Hay River, followed by the whole of Vale Island.

The order came just 45 minutes after an evacuation order was issued for all properties on the river.

Threats to the community’s “new city” — which was built in response to a major flood in 1963 — were considered unlikely by many.

Roy Helmer told Juanita Taylor of CBC that he has lived in the community all his life.

“I’ve never seen anything like it,” he said shortly after the order was issued. “It’s unbelievable. The river gets high, but nothing like this.

“I just see water coming through all the trees there.”

When asked if he would leave, Helmer said he wasn’t sure where he was going.

Video footage by Emma Grunwald of the CBC shows rescuers in waist waders leading people through knee-deep water outside the city’s liquor store. The street in front of the Whispering Willows senior citizen complex has also been flooded.

Video shared by April Martel, head of K’atl’odeeche First Nation, captured the sound of the city’s air siren, which woke many up.

“This is where the theater is; it’s all under water,” Lamb says in the video.

A tweet from Buffalo Air’s Mikey McBryan at 11:43 p.m. said the community was hit by a flash flood and that the Hay River airport, located on Vale Island, was shut down.

I just heard that my childhood home in Hay River has just been hit by a flash flood. My mother got out just as the water was pouring in. YHY Airport is closed. Waiting for more information.