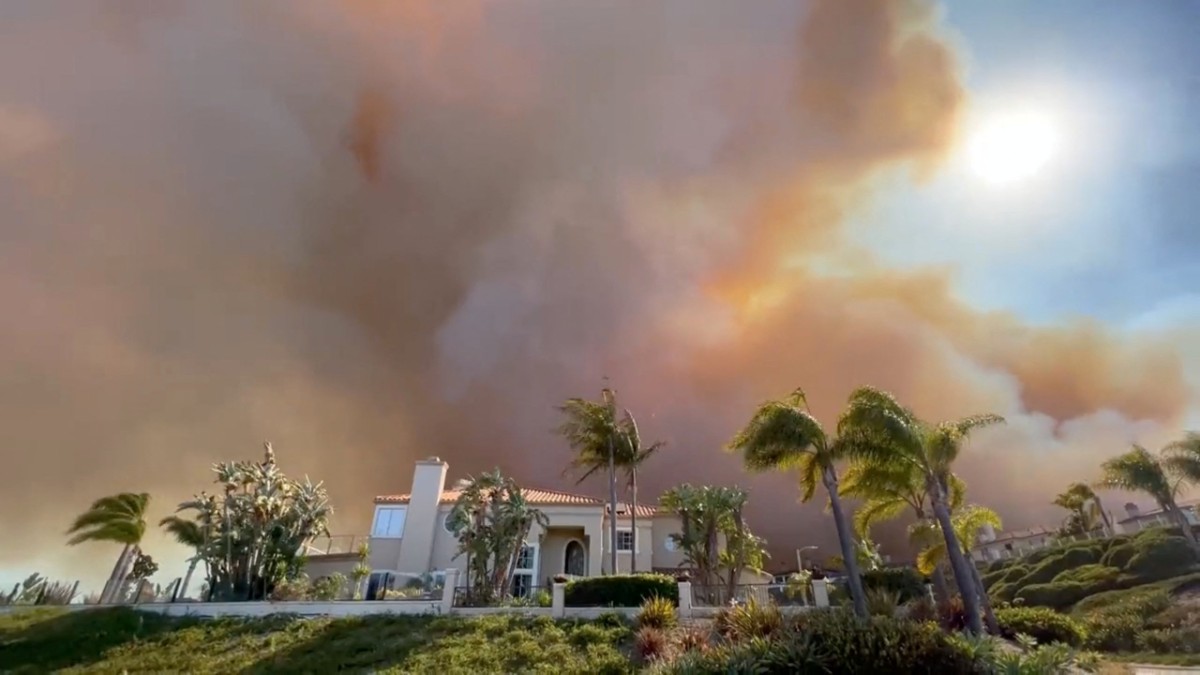 A wind and terrain-driven fire chewed through at least 200 acres of scrub in Aliso Wood Canyon between Laguna Niguel and Laguna Beach Wednesday, then relentlessly marched through an enclave of multimillion-dollar estates on the hillside overlooking the ocean, killing at least 20 homes.

The fire was estimated to be about three acres at 3:30 p.m., but spread to at least 30 acres by 5 p.m. Thirty minutes later, the OCFA put the fire on 150 acres without containment. Crews on site estimate the size at 6:15 PM to be approximately 200 acres

The flames quickly spread as they ripped through thick shrubbery on the hillside, aided by ocean winds that set fires to the main fire. The fire made its way uphill, advancing on Aliso Summit Trail and into neighboring multimillion-dollar estates.

OCFA chief Brian Fennessy said at a news conference Wednesday night that it was estimated that more than 20 homes had been destroyed. The flames reached a hilltop and invaded an exclusive neighborhood, engulfing homes along La Vue and Coronado Pointe near the Aliso Summit Trail.

Sara Nuss-Galles, who lives on Via Estoril, told the Los Angeles Times that she watched the fire grow for more than an hour before evacuating the area.

“My clothes stink from the hour I spent in the house,” Nuss-Galles told The Times. “It’s just plumes of smoke. It’s very scary.”

There were no immediate reports of injuries.

The flames progressed even as fixed-wing planes threw fire-retardant into the hillside in hopes of slowing the flames’ advance. Several water-drop helicopters were also used in the firefight.

Evacuations were ordered in the Coronado Pointe and Pacific Island Drive areas, while voluntary evacuation orders were issued in the Balboa Nyes and Moulton Meadows neighborhoods of Laguna Beach. According to the school district, students participating in after-school activities at Laguna Beach High School were also evacuated.