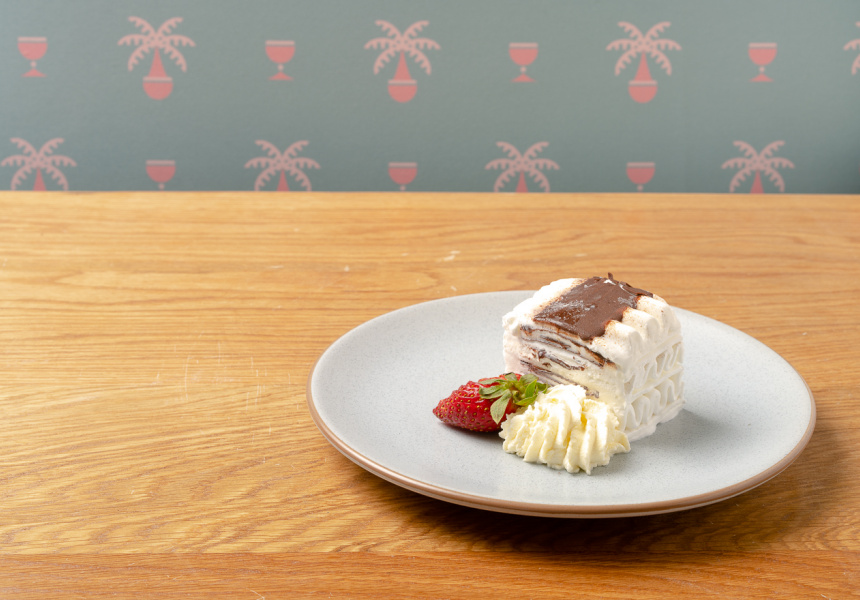 oh baby baby
Nostalgia-fuelled CBD bar About Time has launched a ’90s and ’00s-themed bottomless brunch that’ll have you Mmmbopping. For two hours, enjoy unlimited drinks; cut a rug as a DJ spins classics by the likes of Britney Spears, Backstreet Boys and S Club 7; and plough through a backyard barbeque-inspired menu of coal-roasted pork and lamb, wings, croquettes and potato salad. There are two ticket types – our pick is the This is How We Do It ($95), which includes the full menu, plus Viennetta for dessert, as well as two hours of wine, Greenpoint lager and four rotating cocktails that might include Bloody Marys , Bellinis and Aperol spritzes on tap. sevenrooms.com

Roast with the most
Some of Sydney’s top queer talents are joining forces with Absolut and Heaps Gay this Sunday March 6 to host The Roast, a fitting finale to Mardi Gras month. At the University of Sydney’s Refectory, gather for a four-course banquet created by chef Anna Polyviou, paired with drinks by Absolut. On entertainment duties are Mangarai drag queen Tyra Bankstown and her house queens, the Super Massive Blaq Moles. They’ll be joined by the QTBIPOC collective House of Silky, as well as Stereogamous’s Paul Mac and Johnny Seymour, and Timothy and the Heartstrings. All ticket sales ($108.90) go to ACON, an organization specializing in HIV response and sexuality and gender-diverse health. events.humantix.com

Kings, unite
Brunches hosted by drag queens aren’t tough to find in Sydney these days. Those led by drag kings? Not so easy. Elm Rooftop Bar in Darlinghurst is changing that though, with the launch of its drag king bottomless brunch. Not only will guests get two hours of sparkling wine and rosé, but they’ll also party alongside drag kings, including Elm’s resident king, Axl Rod. There’s an ace menu of dishes including oysters, soft-shell crab banh mi, shakshuka, and waffles with maple butter. It’s on every Saturday for the next five weeks, then on the first Saturday of every month. Tickets are $129 each – or upgrade to the $149 ticket for free-flowing Veuve Clicquot alongside your French rosé. taphousedarlo.com.au

Join the club
Northern beaches coffee roaster Barrel One – which also boasts a trio of outstanding cafes – has launched The Breakfast Club, a coffee subscription service that’s ideal for working from home. Not only can you get beans whole or ground to suit your brewing equipment, but there’s also fancy instant coffees (including an instant batch brew), a filter of the week, biodegradable capsules and decaf beans. Buy them as a one-off delivery, or as part of a three, six or 12-month subscription. thebreakfastclubonline.com

Easy being green
Sydney’s green beauty festival is back for its second year. The Green Edit will exhibit organic and natural make-up, skincare, fragrance, hair, lifestyle, nail and beauty products in The Domain on March 10. Brands including Ere Perez, Edible Beauty, Dr Hauschka and Inika Organic will be there showing off their were. But there’ll also be bars serving organic wine, a range of vegan canapes, skincare and make-up masterclasses, one-on-one skincare and make-up consultations and discounts. Plus, every guest gets a goodie bag worth more than $500 packed with full-sized products and premium samples. And $2 from each ticket ($39) goes to cancer charity Look Good Feel Better. thegreenedit.com.au