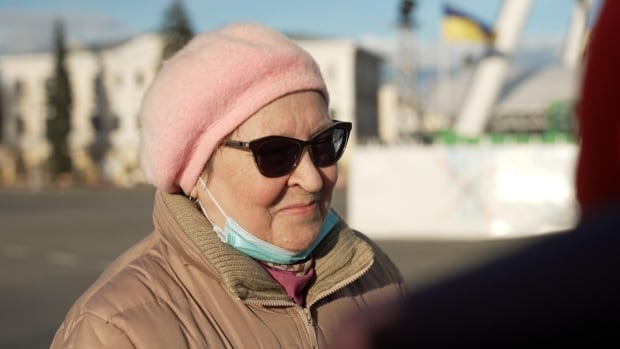 As the minutes ticked down Saturday to the start of a weekend curfew in Kyiv, Lydia Sokolova was one of the few ordinary citizens out on the streets of the Ukrainian capital.

Her mission — to feed her son’s cat — was more than worth any risk, she says. At 74, she appears determined not to let the threat of a Russian invasion instil any sense of panic in her.

“I’m not going to a shelter,” says Sokolova. “We live in an apartment. My mom is very old though. She’ll be 97 soon, so I am taking care of her. Right now I am going to feed my son’s cat.”

Sokolova’s desire to keep life as normal as possible aside, her journey through a city that feels like a ghost town offers a sense of how quickly and completely day-to-day life in Kyiv has been turned on its head since the Russian invasion began Thursday .

Considerations about feeding a family cat now have to take into account curfews, air-raid sirens and the uncertainty of when and where Russian troops might enter the capital.

And while Sokolova might be choosing to stay above ground, many others have gone underground and remained there. Hotel car parks, basements and Kyiv’s underground stations are all serving as temporary bomb shelters.

Curfew in force as fighting intensifies in Ukraine after Russian invasion

A curfew has been imposed in Kyiv until Monday morning, as thousands of Ukranians flee by car and foot to escape Russia’s invasion. 10:20

“I never, ever believed [it was possible],” says Kate Savinna, 33, about her city being the possible target of an invasion.

Sitting with her dog Toufi on her lap in the underground car park of a hotel in the center of the capital, she adds: “We were like, ‘No one will do something like that in Kyiv.’ We thought that something might happen around the borders or occupy [areas close to others already] busy.”

Savinna and her partner, Taras Baran, aren’t guests at the hotel, but a friend of theirs is. When the air-raid sirens started wailing across the capital earlier this week, the couple didn’t feel safe in the apartment they share close to Kyiv’s main airport where there’s been intense fighting.

“It definitely feels much safer than staying home alone, like in your apartment,” said Baran, 26, who’s an architect. “It feels much safer here. And then also, as we decided, like to stay the first night in Kyiv, the things were getting worse and worse.”

The couple has been sleeping on a mattress brought to them by their friend. Given the curfew, they’ve had to teach Toufi to make do with quick toilet breaks.

The car park has become a temporary home to an assortment of Ukrainians, foreign journalists and workers from an international aid agency, which has set up shop in one corner of the garage.

The rest of it is covered with a sea of ​​mattresses and blow-up beds and, for the less fortunate, strips of cardboard laid out under a blanket.

On the animal front, there are at least three dogs, a couple of cats and a rabbit tucked in with their owners.

Savinna’s and Baran’s car is parked in the garage. They were hoping to reach Baran’s family in west Ukraine and had planned to stay only one night in the car park.

But now, they feel it would be safer to stay. They also don’t like the idea of ​​getting stuck on a road out of town — it usually takes five hours by car to get there, but some people were spending 30 to 40 hours on the road and fuel isn’t readily available.

Savinna’s family is in Luhansk, one of the divided territories in Eastern Ukraine where fighting — between Ukrainian forces and pro-Russian separatists in two self-declared People’s Republics recently recognized by Russia — has been ongoing since 2014.

“Right now it’s more quiet than here,” says Savinna, “and [my family are] pretty distressed because of us.”

Kyiv Mayor Vitali Klitschko said Russian forces have ‘nothing to find here in our home’ and said he hopes Sunday night will be quiet. 0:40

Ukrainians worry about their country’s future

For now, Savinna and Baran are coping with the day-to-day trials of their situation with as much good cheer as possible.

Thinking about the future of their country is a more difficult prospect.

They worry that if the cost of peace is an enforced neutrality for Ukraine that they will remain forever trapped between East and West.

“I guess Ukraine and the Ukrainian people will never feel safe,” says Baran. “It would be a gray zone between Russia and the rest of the world. So I guess it’s not acceptable for anybody here.”

That’s a sentiment echoed by Sokolova, above ground and of a different generation.

Sokolova says she wants Ukraine to be a member of NATO and the European Union.

She also holds hate in her heart for Russia.

“My father is Russian from Moscow. My mother is Ukrainian from around Kyiv,” she says. “It’s not toward the Russian people — it’s toward the government and Putin. We hate him very much. Terribly.”