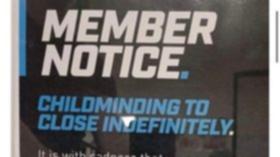 Parents are outraged after a popular Australian gym announced it will stop all childcare.

Goodlife on Friday told customers it will no longer be able to babysit their kids while they go to the gym from July 3.

A post on the Goodlife Health Clubs social media page said the decision was made “with a heavy heart” due to a 50-60 percent drop in usage due to COVID-19.

Perth mom Lisa Pellegrini-Moran told PerthNow she was concerned that many of the other parents would have no choice but to travel longer and find an alternative gym.

“It’s a bit of a shame,” she said in response to the news.

“I’m lucky because my kids will be in-kind next year, but a lot of other moms still have young kids and need the service to get to the gym.”

Ms Pellegrini-Moran described the gym as her “saving grace” as she tried to juggle young children with a husband who was working away.

She said she was “devastated” to new moms.

But Ms. Pellegrini-Moran wasn’t the only upset member, with other parents slamming the move online.

“Too bad you’ve closed all the daycare centers… for any parent who has to cancel their membership, I really hope you plan to waive the cancellation fee,” one woman wrote.

“My local Goodlife nursery is often fully booked when I try to book my daughter. As a mother of four, group fitness has been my outlet for the past 12 months, but without crèche I unfortunately cannot attend and will be canceling my membership.”

The gym user also criticized the company for posting the message to Facebook before emailing members.

“In an era where the importance of health and wellness is increasing, you are closing an integral part of your surgeries that allows mothers and fathers to perform self-care. This set your business apart and now there is little that sets you apart from the other gym chains.”