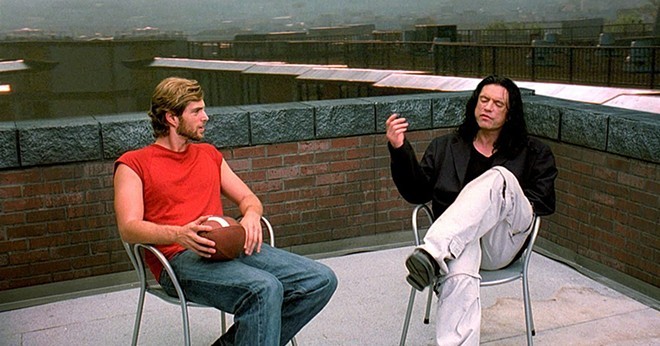 Twenty years ago, Greg Sestero was a model who had been trying to break into Hollywood when he agreed to help an eccentric entrepreneur he met in an acting class named Tommy Wiseau make an indie feature film.

Wiseau would write, produce, executive produce, direct, and star in the movie alongside Sestero, who figured nobody would ever actually see it. The rest is history: the 2003 movie The Room is a bizarre love triangle drama that was panned by critics, but eventually amassed an enthusiastic midnight movie fan base known for yelling at the screen, throwing objects (including plastic spoons and footballs), and dressing up as their favorite characters.

The film’s cult following has only continued to grow.

Sestero says he’s still surprised by the film’s unlikely success, and the career it’s afforded him. When reached by phone, he’s on a scouting trip in New Mexico for an upcoming UFO abduction film tentatively called Forbidden Sky† He’s also gearing up for a wide release of his latest project, Miracle Valleya horror film he also wrote, directed, produced, and starred in.

“I guess I pulled a Tommy,” he says of his experience wearing many hats on the set of the film.

Shot in Arizona, Sestero describes Miracle Valley as inspired, in a way, by his experience making The Room† “I’ve always been really fascinated by cults, like the Manson cult … the whole culture of that,” Sestero says. “And being part of The Room is very much a cult, and seeing sort of the exciting aspect of what cults are about.”

Around 2005, Sestero says he noticed people in the audience throwing a football during a festival screening of The Room, echoing the actions of one of the movie’s most confounding scenes. But it wasn’t until 2008 that he truly became fully aware of The Room‘s following, when a reporter from Entertainment Weekly contacted him for a story. “I thought it was a joke,” Sestero recalls. At that time, the movie had taken off among LA’s comedy scene, and was becoming known for its raucous viewing parties.

“I think there are very few movies that do that, that bring about that participation,” he says, adding that The Room falls in a niche category that includes The Rocky Horror Picture Show and The Big Lebowski† “You just can’t plan those kinds of things,” he says.

Ash The Room‘s fan base grew, Sestero wanted to try and harness the momentum. “I was like, OK, people are seeing this movie. What do I do with this?” he says. “How does this prop me forward?”

In 2010, he started writing a memoir about his experiences behind the scenes, which became the 2013 book The Disaster Artist: My Life Inside The Room, the Greatest Bad Movie Ever Made† In 2014, Seth Rogen’s production company Point Gray Pictures acquired the rights for a film adaptation. Sestero was soon tapped to help, consulting with the filmmakers and providing photos to the production designer for an authentic dramatization of the making of the movie. The resulting 2017 buddy comedy The Disaster Artist was produced and directed by James Franco, who also played Wiseau alongside Franco’s brother Dave, who played Sestero. (Franco’s portrayal of Wiseau wound up winning a Golden Globes award for Best Actor — Musical or Comedy.)

“It was just so fun to be a part of, and I was so at peace with it,” Sestero says. “I was glad those guys got the story, they were a great group. It was great to just enjoy the process and be a part of it.”

Sestero says his experience working on the huge Hollywood production inspired him to want to continue to make his own films. He produced and wrote Best F(r)iendsa two-part 2017 dark comedy that once again starred Sestero and Wiseau, this time as an LA drifter and a mortician with a dark past, loosely based on a road trip the two took together.

Sestero says the two still keep in touch. “We’ve known each other now for almost 24 years,” Sestero says. “It’s one of those things where you almost become like cousins, in a way. Our lives are twinned creatively.”

Despite so many years of friendship, though, Sestero says Wiseau is still largely an enigma. “He’s mysterious, but at the same time he’s very smart in his own way,” Sestero says. “He’s a very complex, mysterious guy that I just kind of stopped trying to solve.”

The best way to understand Wiseau is from his magnum opus, Sestero says.

“I think when it comes to his life, he really really wanted to build something that would move people,” he says, adding, “I think The Room is definitely something that is very much who he is.”

Sestero says that though he’s open to the possibility of revisiting The Room as a sequel, he also knows that it would be difficult to recapture that lightning in a bottle. “It just has this sort of magic or whatever,” he says. “It would be really hard to recapture that vibe.”

Still, Sestero says he’s amazed by how The Room‘s legacy continues to evolve, with audiences coming up with new rituals. He says he’s recently noticed a new trend where viewers begin counting down in one scene as Wiseau’s character Johnny flips out, tearing a room apart.

“So it’s almost like the audience is stepping up to make the movie an even better experience,” Sestero says. “It’s always evolving.”