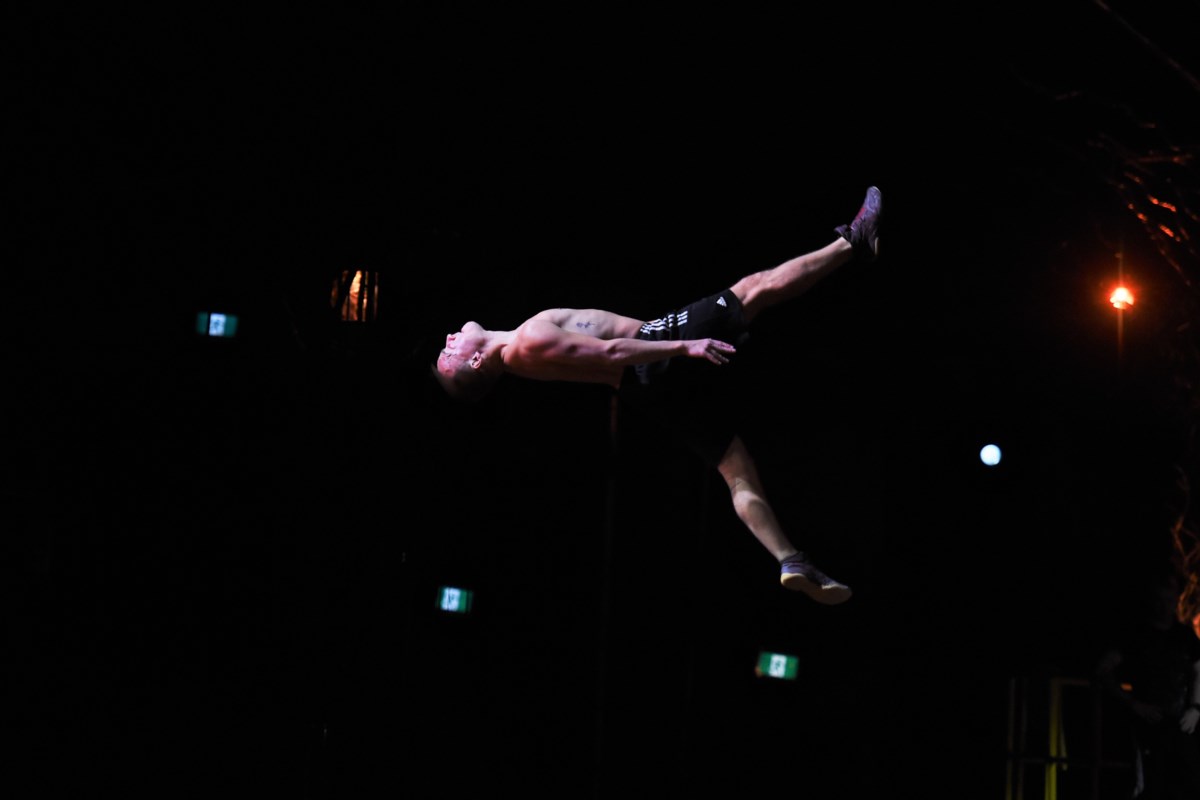 For nearly three months this spring a huge blue tent will sit on the shore of False Creek.

During that time, tens of thousands of fans will go and see a performance of alegria, one of the most famous Cirque du Soleil shows. They’ll walk into the tent, visit the gift stands and concession, and find their spot to watch the spectacle unfold on stage from their seats in front.

We went in on the other side.

Backstage at the circus may sound like a recipe for chaos; but while the inside of the tents on that side is definitely a working area, it’s not a zone of mayhem. It’s a place of work, but for a very specialized job.

“It’s really unique; Cirque Du Soleil really takes care of us,” says Sydney Brown, one of the Canadian performers, who specializes in the powertrack. “You don’t have to worry about food, rent, transportation, you just focus on your job. And you travel with a group of people who are very like-minded and very passionate about what they do and you get to meet people from all over the world and learn new skills constantly.”

The backstage area is actually relatively small for such a big performance (there are 53 performers and a total 133 members on the team) broken up into a few different spaces.

The most central is a warm-up area, with mats for the performers to warm-up and train on. For example, the powertrack team used a trampoline to get some pre-practice air and stretch out, before heading to the main stage to prepare for a week’s worth of performances. There’s also some basic gym equipment and storage along the walls.

Directly adjacent to that is the costume department; some employees travel with the show while others are local hires for the duration of Cirque du Soleil’s stay. There are almost 100 different costumes in the show, with more than 530 different pieces. Even though the costumes are created in Montreal, the wear-and-tear that happens over time means repairs are needed on the road, and they need to fit perfectly.

Just off the costume department is the shoe tent; it’s dedicated to repairing and rebuilding shoes from the ground up. Each is handmade, and they have the materials to recreate them on scene with just the basic materials.

The back tent also has small private areas, and a common space with a couch and TVs, which can be used to relax or review video.

The walk from the warm-up/training/dressing area to the area directly backstage is surprisingly small, with just a short hallway. At that point, the scaffolding for the stage (which takes four days alone to build and rig) is directly in front of you and a walkway leads off to one side and the front.

Brown, who’s been with the show since August 2021, says the vibe of the area backstage is much more relaxed than competitive gymnastics, which she’d done for years before.

“It’s such a different environment compared to competing. Competing, it’s all stress and if you screw up that one competition you could be out for the rest of the season,” she says. “Mistakes happen; we’re human, and when they do we kinda just laugh it off back here and there’s always the next show to improve it.”

That’s not to say there’s no competition or stress, but the competition is between friends and colleagues and the stress mostly comes from internally wanting to be perfect, not externally.

“It’s a challenge, mentally,” Brown says, particularly about new tricks. “But it’s nice to know they trust me, and that’s what I take on stage with me.”

For her that included the Acro Poles.

“I started gymnastics when I was 1.5 years old and when I was looking at my contract I saw Acro Pole and actually had to ask ‘What is this?'” she says.

Now she’s part of the team performing on them.

It’s also a very international place backstage. There are 19 different nationalities up on stage, and 25 in total represented on the complete team.

They become a sort of traveling family over time; Jalbert notes they perform for a couple of months in four or five cities each year and shows can last up to 20 years, with some performers staying on for more than a decade.

“It’s really exciting,” says Brown. “Spending 2 months in one place gives us a lot of time to explore the city and where we’re at.”