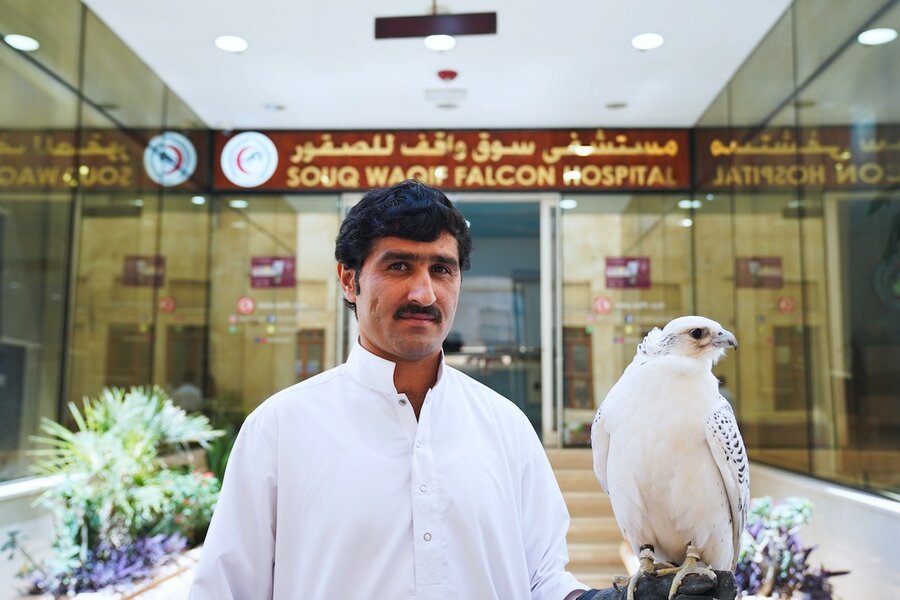 At first glance, the Souq Waqif clinic in the historic center of Doha could be any other state-of-the-art hospital.

Nurses in blue scrubs move briskly through the bright wards, conducting rounds. Radiology and operating rooms whir with the beeps and blinks of monitors. Specialists squint at X-rays and masked doctors make incisions with all the high-tech tools of modern surgery on hand.

There’s just one thing: The rooms are filled with falcons.

In the tiny, wealthy emirate of Qatar, the desert birds are among the nation’s most pampered residents.

Long revered across the Arabian Peninsula for their ferocity and hunting prowess, falcons today serve as sheikhly status symbols recalling a Bedouin past. The bond between falconers and their falcons has been an inspiration since the Paleolithic period when drawings of the creatures first appeared on cave walls.

Although less fashionable now than in the days of yore, the art of falconry is still passed down from one generation to the next in Qatar and other oil-rich sheikhdoms of the Persian Gulf. With demand growing in recent years, clubs that teach the sport have sprouted up across the region. Falcons compete in an increasing number of races and beauty contests.

The finest falcons fetch at least a few thousand dollars and Qataris spare no expense to maintain their good health.

“The establishment of the hospital was to support the hobby and heritage of raising falcons. … it’s a pastime that stretches its veins into multiple generations,” Souq Waqif hospital director Dr. Ikdam Al Karkhi recently told The Associated Press. “Keeping them alive and well is an essential duty.”

Public hospitals like Souq Waqif offer expert care to sick and wounded hawks, roughly 30,000 a year. The marbled reception area bustles with owners and handlers bringing their birds in for check-ups, medical tests, feather replacements, orthopedic surgeries – and even something akin to mani-pedis.

Falcon nail filing is very serious business, as birds transplanted from the desert wild to opulent homes in skyscraper-studded Doha or bred in captivity cannot easily find sharp surfaces on which to trim their talons.

The falcon’s hunt may be a long-venerated tradition, but it’s also grisly work. The cornered prey at times puts up a fight, clawing an attacking falcon and hobbling its wings. Each of a falcon’s feathers is vital to its flight, necessitating careful feather replacement after a scuffle.

Doctors pull from a bank of shed feathers to find one that perfectly matches the wounded bird’s breed – plumage of the same pattern, length, and color.

“If these damaged feathers remain, it can cause loss or reduction of the bird’s fitness,” Dr. Al Karkhi said. “They must be treated.”

Hospital surgeons treat other casualties of the hunt, too. Falcons’ beaks and talons suffer damage from all that swooping and plunging and gobbling.

In the clinic waiting room, falcons perch regally on their owners’ gloved wrists. The Qatari men in their flowing white robes treat the prized birds like children, stroking their feathers, and misting their beaks with water.

“If a person is neglecting their bird, it’s a huge problem,” said Hamad Al Mehshadi, a falcon festival manager taking his raptor for a regular medical checkup. “When one holds onto their bird, it is something else. The love of the bird is extraordinary.”

Oil wealth and global business may have transformed Doha into a futuristic capital with a gleaming array of skyscrapers and megaprojects, including giant stadiums soon to host millions of soccer fans for the upcoming 2022 FIFA World Cup.

But Souq Waqif still sees a steady stream of 150 falcons a day – a sign that the echoes of Qatar’s ancient past are not lost.

Get stories that
empower and uplift daily.

“Even the look that a falcon and its owner share, it’s different than any other look,” Dr. Al Karkhi said. Falconers “feel the loyalty of this bird – a fierce warrior in the wild and yet a pet in my hand.”