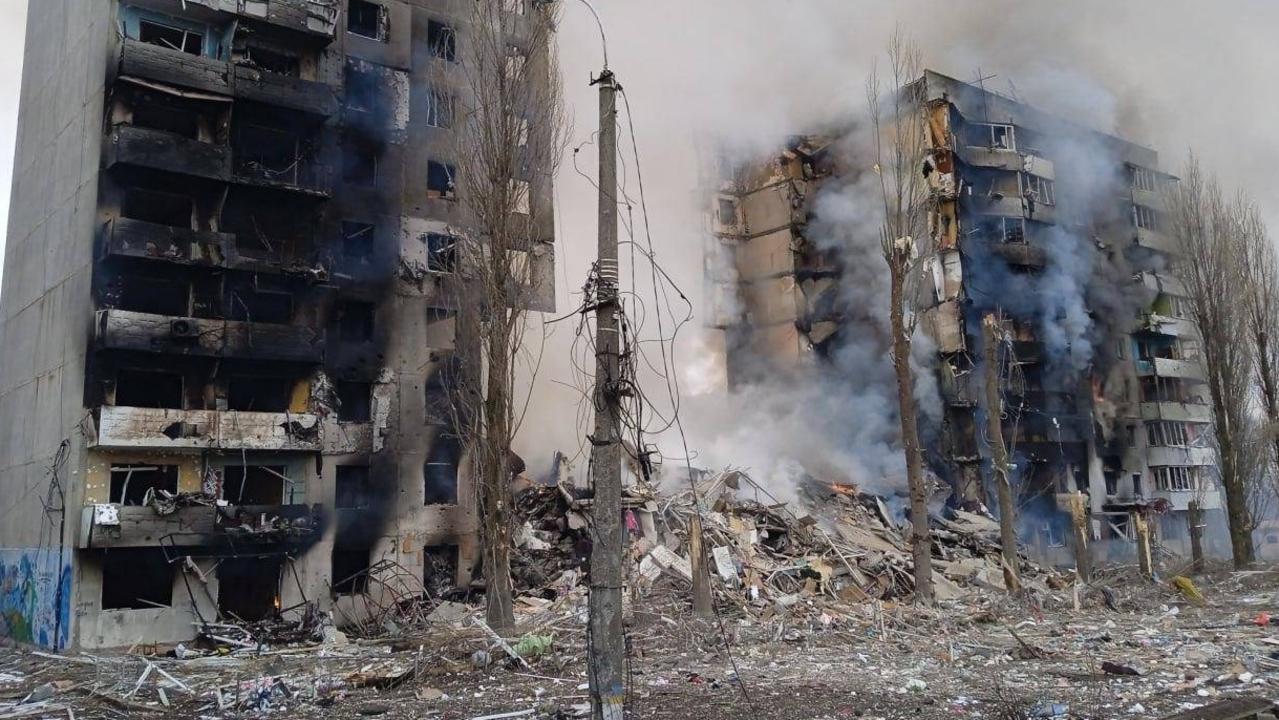 Putin’s war in Ukraine is not going to plan and the Russian leader could find himself backed into a corner. Here’s how the war could end.

Russian President Vladimir Putin’s full-scale invasion of Ukraine on February 24 is apparently not going to plan with many concerned about the conflict will end.

This week United States authorities said they believe the Russian force has not attained the goals it had set for itself ahead of crossing Ukraine’s frontier.

The apparent Russian plan to quickly seize the two largest cities, Kyiv and Kharkiv, has faltered because of “creative” resistance from Ukrainian troops and the Russians’ own fuel and logistical support issues, the Pentagon believes.

“They have not achieved what we believe they intended to achieve by day four. So in many cases, they’re behind schedule,” the defense official said.

Nevertheless, the official said the Russian military will adapt and still has one-third of its invasion force on the border waiting.

“That’s a lot of combat power,” the official said.

With Western sanctions now starting to bite and Mr Putin facing stronger resistance to his plans than he may have expected, experts believe there are four ways the conflict could play out.

This is how the invasion could end.

As sanctions on Russia ramp up, and with some saying the prospect of a decisive victory in Ukraine looks less likely — eventually Russia may consider negotiating a peace agreement that allows it to claim “victory”.

Some believe a negotiated conclusion is the most likely outcome, despite the challenges to an agreement.

A first round of talks between Russian and Ukrainian delegations took place on the Ukrainian-Belarusian border, but brought no results.

Mr Putin told French President Emmanuel Macron “the demilitarisation and denazification” of Ukraine, and Western recognition of Russian sovereignty over the Crimean peninsula were prerequisites to ending fighting in Ukraine.

Ukraine has demanded a ceasefire and the withdrawal of Russian troops.

Some suggest Mr Putin could offer to trade some of the territory he’s gained control of in the Donbas region in exchange for recognition of Russian rule over Crimea and a commitment that Ukraine would agree never to join NATO.

However, this would involve Ukraine ceding some of its territory. It would also not fulfill Mr Putin’s vision for reabsorbing Ukraine into Russia and could damage his image.

“Nobody at home will buy a ‘victory’ narrative from such an outcome after the scope of his invasion,” Australian Defense College senior fellow Matthew Sussex wrote in the Lowy interpreter†

Prof Sussex believes this option is unlikely in the short term but may ultimately be necessary.

“Depends on how ‘rational’ Mr Putin is (and that’s a subject you could fill books about),” he wrote.

The second round of ceasefire talks will take place on Thursday at an undisclosed location on the Belarus-Poland border.

Another exit would be for Russia to seize control of Kyiv, something that would see Ukraine President Volodymyr Zelensky killed (making him a martyr) or fleeing into exile.

Russia could then install a puppet leader sympathetic to its regime.

However, given the strong rebellion against the Russian invasion in Ukraine, it’s unlikely the population would support a Russian-backed leader and it’s possible authorities would face resistance and fighting in the country for many years to come.

In order to maintain control Russia may have to maintain tens of thousands of troops in the country.

It may also not be easy to take control of the capital, with Russia either having to unleash a massive strike against the city or potentially lay siege for weeks, something that could test the patience of Russians suffering from damaging sanctions.

However, while Ukrainians remain defiant now, this may not always be the case.

Emeritus Professor of War Studies at King’s College London, Lawrence Freedman, said this would depend on “the extent of the bombing, the prior state of their morale, and the quality of their leaders”.

Russia would also face paying a high price for taking the city as urban environments are a challenge for invaders.

“Units can get lost and isolated, caught in city streets, with reliable intelligence difficult to acquire. If Russian commanders want to keep their casualties down this is an uncomfortable prospect,” Prof Freedman writes.

Another unlikely scenario, although not completely improbable given Mr Putin’s apparently unhinged appearances, is that he would unleash havoc not just against Ukraine but against NATO and the western world.

This is one reason why the United States and NATO have so far been careful to say they would not intervene in the Ukraine conflict.

On February 27, Mr Putin ordered his nuclear forces into a “special mode of combat duty” and UK-based international affairs think-tank Chatham House analyst Dr Patricia Lewis believes this could be a pathway for Russia to use its nuclear weapons in a “ first strike surprise attack”. The threat of this serves as a warning to others countries to stay out of the conflict.

However, NATO could get drawn into war in several ways, one scenario could see it intervening to prevent the launch of nuclear weapons by bombing storage sites and missile deployment sites in advance.

It may also act if Mr Putin does decide to launch a nuclear attack in Ukraine.

So far NATO has ruled out declaring a “No Fly Zone’ in Ukraine as Putin would see this as a declaration of war, because it would involve NATO aircraft attacking Russian assets.

But if NATO did get involved, at some point Mr Putin may be tempted to tip the balance by firing some “low-yield” nuclear weapons against its troops or munitions, a possibility explored in this slate article.

“The smallest nukes in the US and Russian arsenals are about the same size as the A-bomb that leveled Hiroshima at the end of World War II,” the article notes.

“The hope would be that the US president would halt the war (“de-escalate”), fearing that if he responded by firing off nuclear weapons, Russia would fire off more.”

Even without provocation, Mr Putin could consider detonating a nuclear weapon to demonstrate his power and resolve, especially if he was feeling backed into a corner.

However, as Australian Defense College senior fellow Matthew Sussex wrote in the Lowy interpreterthis would likely result in a Russia-NATO war he is “unprepared to fight and would probably lose”.

“The only viable next escalating step would be WMDs (weapons of mass destruction). His inner circle may eventually decide that enough was enough.”

With the value of the Russian currency plummet, and the activities of oligarchs disrupted around the world, it’s plausible that some in Mr Putin’s inner circle will be thinking about whether to dethrone him.

Those close to him are already crying over the loss of their luxury Italian villas.

Protests in Russia also show Mr Putin’s invasion is not popular among many of his citizens.

“Putin, who has isolated himself, in all senses of the word, risks now losing that aura of ruthless power that he has carefully cultivated,” Prof Freedman writes.

“That aura meant that only the bravest of domestic opponents took him on and autocrats elsewhere embraced him as an exemplar to follow.

“What will matter most will be rumblings among the elite as they see the consequences of their leader’s recklessness,” he wrote.

“When we know more about how this war ends we will understand better how his regime ends.”

Originally published as How Russia’s war in Ukraine could end