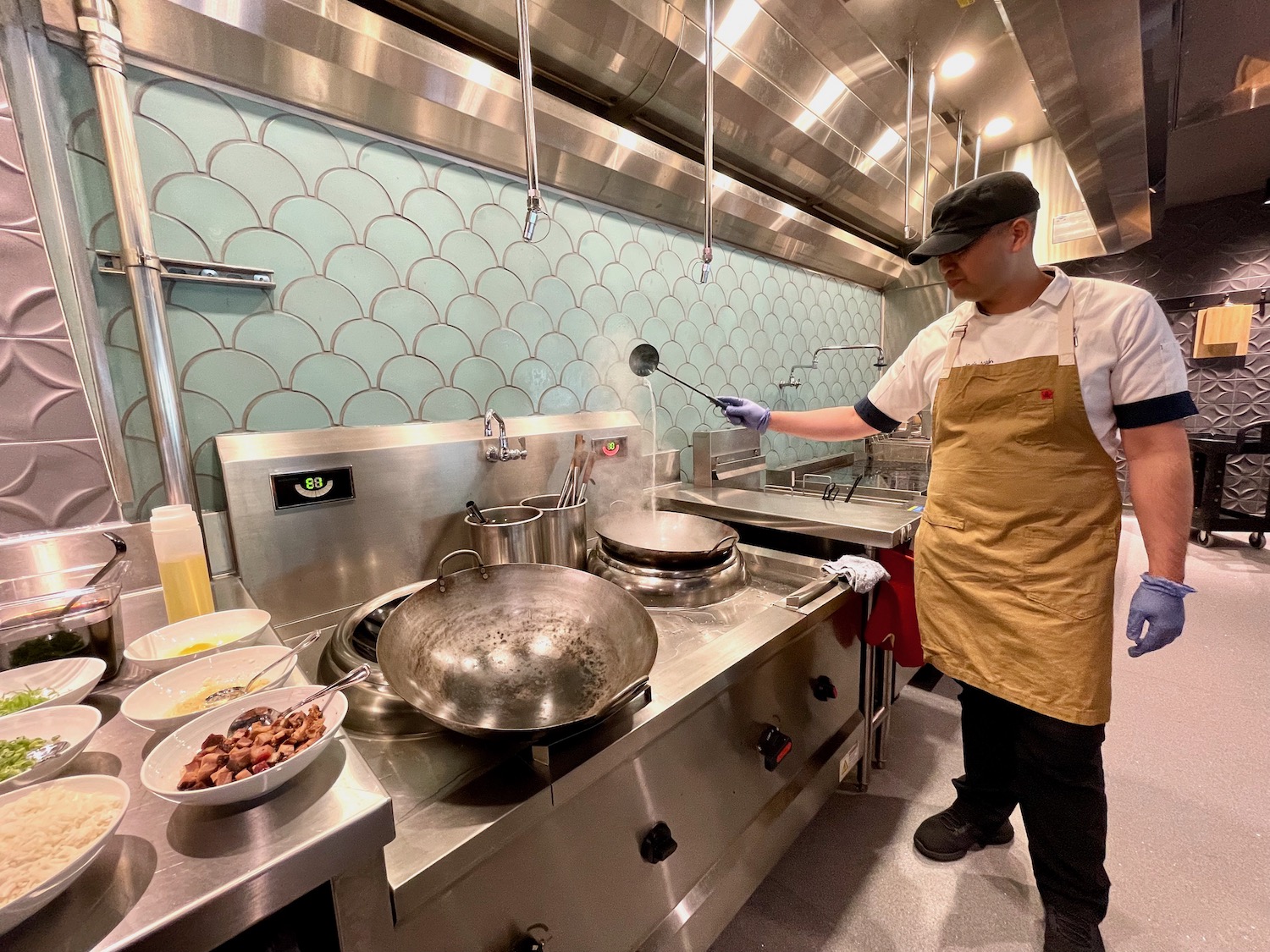 In the early days of Microsoft, Bill Gates and Paul Allen were so focused on starting their software company that the idea of ​​stopping to eat a good meal was almost never a thought.

Gates famously discussed his penchant for fast food and long hours at the time. In fact, in the 2019 Netflix documentary “Inside Bill’s Brain,” he said he poured Tang drink mix powder on his hand and licked it off to give himself an energy boost while working.

More than 40 years later, employees at the company’s sprawling Redmond, Wash., corporate headquarters campus and other office locations of the company don’t just stop to eat, they do it in chic in-house dining rooms with an array of culinary offerings.

And now they are going to do it even more sustainably.

One Esterra is a new Microsoft office building that opened in late March, next to where the company is building its new East Campus. The LEED Platinum-certified building features a 100% electric food hall, a first for Microsoft and a testing ground for what the company will encounter as the tech giant aims to be carbon negative by 2030.

On a tour this week, GeekWire saw chefs at work in 13,200 square feet of all-electric cooking space in nine custom eateries, equipped to cook more than 1,000 meals a day without lighting a single flame.

Commercial kitchens use about five times more energy than an office building, according to Katie Ross, Global Real Estate Sustainability Lead for Microsoft. She first started thinking about switching to electric five years ago and faced the daunting task of replacing equipment made up of 80% gas.

“If you’re trying to electrify an entire building and you’ve done the mechanical systems, removing gas from kitchens is kind of the last step,” Ross said. “And that’s the hardest.”

In a competitive tech landscape, even one that has become partially remote and hybrid during the pandemic, there is still a need to feed hungry software engineers in the office. Microsoft is proud of the culture it has created around food and its dining experiences.

Rather than focus on what it could lose by moving from cooking to gas, Microsoft focused on four areas where there was no room to compromise: diversity of food offerings; speed of preparation; authenticity of what was cooked; and the exhibition of it all.

“We didn’t want to put up a wall of microwaves and say, ‘There’s your electric kitchen,'” Westwater said.

The new equipment is anything but that. The Pacific Rim eatery featured one of the more unique pieces: an electric wok made for Microsoft in collaboration with commercial manufacturer Jade Range.

Rather than being in constant motion over an open flame, as woks are traditionally used to make stir-fries and the like, the new wok sits on an induction cooking surface that surrounds the pan. It heats up very quickly and it is very efficient.

Chef Jevic Acain created for GeekWire a pork fried rice dish that looked, smelled and ultimately tasted like it came from a tried and true flame-heated wok. By adjusting the heat slightly on the equipment, watching for searing, Acain achieved the char and flavor typical of wok cooking.

“The fact that I couldn’t see the flame is what I had to get used to,” Acain said of the gas switch. “Typically, when I’m cooking, when I see the flame, I can kind of probe in my head, ‘Okay, I’m either way too hot or way too low. Here, it doesn’t tell me, so all I’m really looking for right now is the response to the pan.”

He said watching that food reaction and cooking with electric has made him a better chef.

The new wok apparently also works for those who eat it. To demonstrate that it didn’t want to compromise on food authenticity, Microsoft has been conducting taste tests for the past two years. It pitted electrically made wok dishes against those prepared on gas. Employees couldn’t tell the difference.

They may be able to see the difference visually, for now, on meat that is no longer roasted over an open fire. A concept on campus called Flame is now called Grilled at the electric dining hall. But electrical technology is on the way to give those meats and proteins the necessary aesthetics.

After touring all the culinary concepts at One Esterra, I sat down with Westwater and Ross for a sustainably minded feast that sampled Latin, Asian and American cuisines, wraps, sandwiches, vegetarian dishes and more.

After dinner, it was easy to forget that old slogan, “Now you cook with gas.” Perhaps “It’s electric and eclectic” is a good alternative for a new era of sustainable food preparation.

Both women remain hungry for their efforts to spread beyond One Esterra. That will happen when the East Campus starts opening next year and 77,000 square feet of food preparation space to serve about 10,000 meals a day will be all-electric.

And they hope it will happen in the culinary industry and society. Because Microsoft does a lot of the heavy lifting in jointly developing equipment, building out spaces, and training employees, they’re eager to share their knowledge.

“To me, the most exciting element of this is the potential ripple effect we have on culinary, restaurants, chefs and the industry as a whole,” Ross said. “Because if we can do it here with 1,000 transactions a day, there’s really no reason anyone couldn’t do the same.”