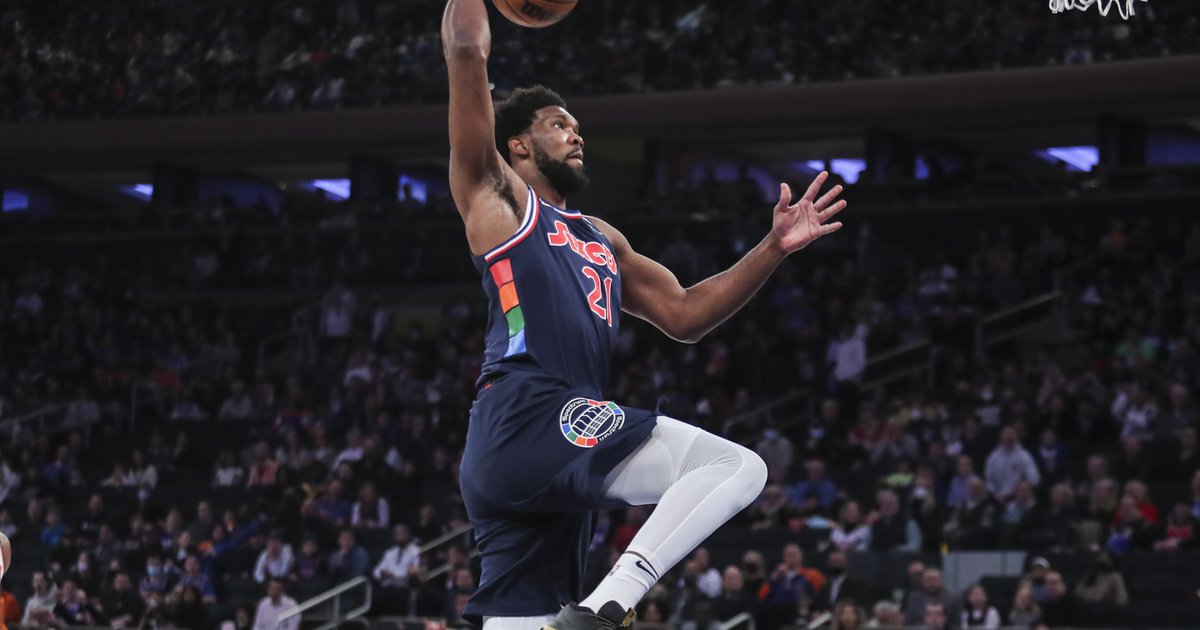 (Embiid’s improved conditioning is a piece of this. He is running the floor harder and faster than ever, he’s hitting gaps in the lane quicker, and he has more left in the tank when it counts in the fourth.)

The problem for opposing defenses is that Embiid is still capable of doing everything else that had him putting up video game numbers before Harden got here. New York was in hell trying to defend him without fouling for most of Sunday afternoon, with or without Harden involved in the action. In the first half alone, Embiid marched to the free-throw line 15 times, with a few “MVP!” chants from the Philly partisans watching from all around Madison Square Garden. The onslaught continued in the second half, as Embiid was a big part of Mitchell Robinson and Jericho Sims both fouling out of the game, forcing the Knicks to go small in crunch time. It’s hard enough guarding Embiid one-on-one and stopping yourself from reaching. Now imagine doing that when you’re in a late help position after rotating over from Harden, desperate to stop the giant freight train from getting rim access.

With Harden in place, all the questions about team-building and what you need to contend with Embiid look like they were a waste of time. Supply him with a legit star ballhandler and the Sixers are going to be an absolute nightmare to deal with on offense. You can only throw the kitchen sink at one guy at a time, and that means one of Embiid or Harden is likely to have an advantage at all times. That’s pretty scary.

Let’s just make sure this is in print, for posterity — 27 free-throw attempts is an insane number, and I don’t think this is the last time you’ll be seeing Embiid and Harden living at the line together.

• One of Philadelphia’s biggest problems of the Joel Embiid era was their inability to keep it together the second Embiid left the floor. The on-off numbers and the eye test have both spelled out the same thing — the Sixers have needed to figure out how to succeed without Embiid on the floor.

Enter James Harden. The lineups around him with the second unit haven’t been totally optimized, they haven’t featured the “two stars at all times” look that Doc Rivers promised, and it hasn’t especially mattered because of how good Harden is. When possessions come to a dead stop, Harden is a human bailout, even if he’s shooting a percentage on stepback threes that will inevitably come down. He can put himself on the line to give everybody a chance to catch their breath, stopping runs and an opponent’s momentum before they can really get rolling.

(Now if Doc Rivers could simply stick to his promise to have multiple starters on the floor at the same time, maybe they wouldn’t have struggled as much to put the Knicks away.)

Aside from Tobias Harris, whose issues are all his own at the moment, Harden is basically making every single guy on the team look better. Thybulle has not shot the ball well at all lately, but Harden completed multiple successful lobs to him in the third quarter alone. Paul Millsap, despite being unable to jump over a phone book, was able to score a couple of times around the basket with Harden threading the needle through traffic. You could honestly argue Harden is leaving some shot attempts on the table, but his pace of play and passing is getting them quality looks at the hoop from all over the floor, and helping to spark everyone else to play a little faster.

If Harden has driven anything home during his first two games as a Sixers player, it’s the difference between someone calling themselves a point guard and a guy who actually lives up to the modern responsibilities of that role. There are windows open for Harden and the Sixers out of actions they have run for years simply because the opponent has to respect him as a scorer no matter where he is on the floor. Harden’s playmaking has almost overshadowed how effective he has been as a scorer in his first two games, and there are even subtle differences between how he’s playing now vs. how he played at the start of Brooklyn’s season. There were some initial struggles for Harden with the league’s points of emphasis in officiating to open the year, and now he is simply fighting through the contact and looking to get up the best quality shot possible, doing a lot less flinging of the ball at the rim and hope for a call.

The result is a return to the form that had him in the MVP conversation year after year. The competition is going to get better in the weeks to come, and I’m very excited to see how this pairing looks the longer they get to play together.

(One bonus from Harden’s excellent second game for Philadelphia: his quick hands on defense, where he ripped a number of unsuspecting Knicks players and got the Sixers out on the break.)

• There’s obviously a long way to go with much tougher opponents to play, but Tyrese Maxey looks borderline perfect as the third guy with Embiid and Harden so far. His improved catch-and-shoot ability allows him to space the floor, his off-ball defense has ticked up a bit, and his speed is even more noticeable with space to exploit in opposing defenses, with the pressure on the other two guys on the floor, not in front of him. When you give a guy with his burst the ability to attack wide-open spaces, he is going to send you to hell before you even realize what’s happening.

That’s basically been the story of Maxey’s last two games, and he looks like he’s having an absolute blast out there. With Harden serving as the immediate outlet for most transition possessions, Maxey dashing down the floor with defenders in his wake is becoming a common sight. His speed has even shown up in some funny ways — Maxey came up with a steal on one possession against the Knicks where he spent the first few seconds of the shot clock complaining about a no-call to an official, getting back into the picture just in time for the theft.

If it wasn’t clear because of everything you’ve seen and heard about Maxey this season, there’s a reason the Sixers made it abundantly clear that they were protecting Maxey in the trade talks that brought Harden to Philly. He has the tools, the work ethic, and the production to suggest he might be capable of special things next to the big two. He’s off to an excellent start, at the very least.

• The pace the Sixers are playing at through the first two games of the James Harden era is absolutely maniacal. There have certainly been some possessions where they take a more methodical approach, letting Embiid or Harden grind down the defense before making a soul-crushing shot, but they are flying down the floor after they get stops, and it feels like their percentage of easy buckets has skyrocketed as a result.

Harden’s impact here is undeniable, though he’s obviously just one part of the equation. Rivers has made it clear to players like Maxey and Thybulle to run at every last opportunity, and both of Philadelphia’s young starters are picking up quick ones thanks to the change in approach. If nothing else, it has added to the team’s fun factor, because ultra-slow basketball can be tough to watch even when there’s high-level execution happening.

• In theory, Tobias Harris should be a huge beneficiary from the addition of James Harden. His burden of creation is now far, far lower than it has been in years, so Harris can focus on the simple stuff — catch-and-shoot threes and attacking closeouts when teams fly out at him. Simple as it might seem, he has struggled to get anything going since the Sixers returned from the All-Star break, and needs to get his act together even if he’s now essentially the fourth option behind Embiid, Harden, and Maxey.

It’s not like he’s struggling to get clean looks at the basket in the new ecosystem. With Harden and backups in the game, the Sixers have used Harris as a screener/pop partner for Harden quite a bit, and with both defenders showing at Harden to get the ball out of his hands, Harris is getting wide-open attempts from deep , clanging most of them off of the iron. He hasn’t looked a whole lot better when he is attempting to take people off the dribble, either, with Harris mostly drifting into traffic on a road to nowhere.

There are a lot of guys who need additional time and touches on ball in order to find their rhythm in a game — not everyone is built to be a catch-and-shoot player who is only marginally involved in the game, catching fire within small windows of time in the offense. The problem is that Harris doesn’t really deserve to have an abundance of time and touches in this version of the Sixers. Harden and Embiid are the feature players, and everyone else needs to slide into roles around them.

Presumably, he won’t shoot this poorly forever, so I expect he’ll perk up at some point. But I disagree with any assessment that says they need him to get “more involved” or run more plays for him. When they tried that Sunday, it’s exactly when the offense bogged down. Hit shots and find your footing.

• Harden has helped out the Sixers on the rebounding front, at least providing an upgrade over Seth Curry in that department, but they are still below where they need to be as a group. I like the effort that has been shown by certain players — Maxey has done a good job of tipping contested plays to teammates and coming hard to the ball when possible — but there are a lot of missed opportunities to close out possessions being left on the table still. Getting out on the break can’t come at the cost of, you know, actually stopping the opponent’s chance to score.

A special nod here to Danny Green, who was at fault for at least three Knicks offensive rebounds and actively took a rebound away from Embiid to the disgust of his teammate.

• I might have disliked the Willie Cauley-Stein 10-day deal more than anybody who watches the Sixers, but the Sixers should give almost anybody a chance to play backup center that can actually jump. Harden is threading passes to Millsap with a runway to the rim and his lack of lift at this stage of his career means would-be dunks are turned into plays where he has to reset the offense or careen off of opponents in the paint. I legitimately think any of Charles Bassey, Paul Reed, or WCS would take better advantage of Harden’s skill set on offense, and I’m not an especially big booster for any of those guys.

that’s before we get to defense, where you could argue the Sixers need even more help from the backup five with the shooting-heavy lineups they’re putting on the floor. Millsap arguably looks even worse there, unable to protect the rim and lacking the foot speed to deal with guys in space.

This is probably the biggest complaint I have about Doc Rivers’ handling of the rotation so far. I get the idea — Millsap is a much more reliable shooting option than any of the other guys, so you can theoretically play five out — but he simply looks cooked.

• Whenever Tom Thibodeau eventually departs the Knicks, I will miss hearing him yelling “GOD DAMN IT, JESUS ​​CHRIST” and other such things from the sideline. Not many hardasses like him left coaching in the NBA these days.