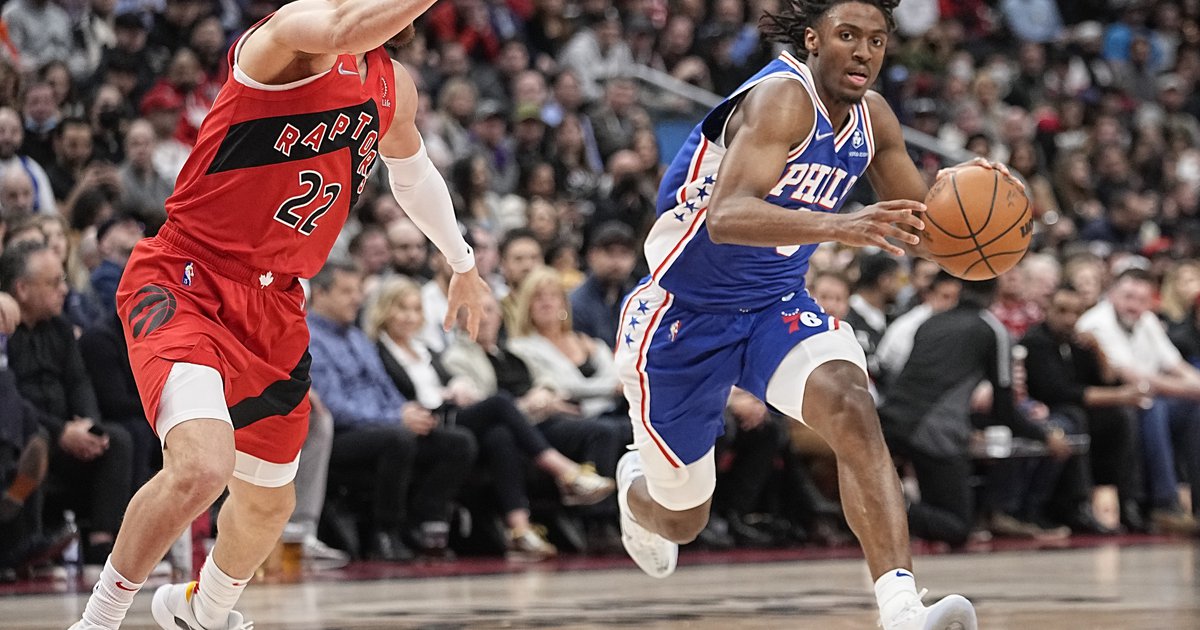 The Sixers fell to the Raptors 119-114 in their final road game of the year, leaving the door open for a potential series with Toronto in just over a week. Given how they’ve looked over the last two meetings, that doesn’t seem like a great situation for Philly to be in.

Here’s what I saw.

• I don’t know if Daryl Morey tattooed “3 > 2” on his forehead, I don’t know if Doc Rivers suddenly feels a bit more urgency with job rumors floating around, I don’t know if this is simply an aberration that will fade into the playoffs. But the Sixers increasing their three-point volume in the dying days of the regular season is probably the biggest story of the final week.

Tobias Harris’ change in approach is doing some of the heavy lifting there, and it helps that he has shot the basketball well since James Harden joined the team. Against the Raptors on Thursday night, Harris continued his recent trend of unloading catch-and-shoot attempts quickly, whether they came on a swing pass in a halfcourt set or on a look in transition, punishing the Raptors for losing him as the teams went end to end. He is a confident shooter right now, and who could blame him? Harris is getting terrific looks at the basket, and he’s taking advantage of the attention paid to Joel Embiid and James Harden. They needed more from him after a hot start, obviously, but he is trending in the right direction.

Tyrese Maxey, on the other hand, hasn’t exactly needed a lot of help to get his looks at the basket, with his off-the-dribble confidence continuing to rise as he puts the exclamation point on a great sophomore season. There have been some ups and downs recently as there are for any shooter, but the key thing is that Maxey has kept on coming night after night, committing to his role as an outside threat. Maxey playing his part helps clear out the middle of the floor for everybody else, and as you can see in a matchup with Toronto, every inch of real estate is precious.

Some of the moves Maxey can throw at guys now are simply special, or at least they would be if Maxey wasn’t busting them out week after week, game after game. Hitting a crossover into a pull-up three? Easy money these days:

He has a pretty firm case as their most dangerous perimeter scorer at this point, given Harden’s visible lack of burst. When the Sixers looked absolutely dead in the water in the fourth quarter, it wasn’t Embiid or Harden who managed to claw them back into it, it was No. 0, who used his speed and touch from all over the floor to go on an individual scoring run that brought them back within striking distance.

They are going to need his absolute best in order to succeed in the playoffs.

• I am somewhat skeptical of Shake Milton as a pure catch-and-shoot guy — he has always looked more comfortable in a combo guard role that he doesn’t get to play much with this group anymore — but he has been a good spark off the bench the last couple of games. If he can knock down shots with any regularity, it makes the second-unit minutes slightly less scary.

Elsewhere in the depth department, it was clunky for all of about 90 seconds with Danny Green in Matisse Thybulle’s starting spot, and then the veteran wing managed to get the heck out of the way, setting up from his spot of success in the corner. Once he saw one go down early, he didn’t have to think for the rest of the game, hoisting anytime he had even a sliver of daylight on the perimeter. His legs aren’t what they used to be, and he can’t be trusted to take on high-level assignments on defense, but when he gets rolling he can still swing a game with his shooting. Or in this case, keep the Sixers in a game with his shooting.

There’s not a whole lot to analyze here except to say that if they get actual three-and-D contributions from Green in the playoffs, they’re a different team. He opens up the floor in a way that Matisse Thybulle never will, and he has been through a ton of playoff wars, if the ring he received in Toronto on Thursday wasn’t a good enough reminder of that fact.

• Joel Embiid has had some nightmare games against the Toronto Raptors over the years. Early on, there were some bouts of doing too much for the big man, and I don’t blame him with the adjustment period you have to go through playing the Raptors. They threw all sorts of looks at him, fronting him and doubling him and trying to pass him off between similarly-sized players, all to keep him off-balance long enough to slow him down. It worked early, but the big man would eventually find a workable repertoire, though he was admittedly only pretty good, rather than great.

If anything, the Sixers probably needed to run some more pick-and-rolls involving Embiid and Harden, as most of their best offense came when those two operated together in the middle of the floor. That’s something that falls on both of their shoulders — Embiid has to seek that out instead of lingering inside the arc, and Harden has to be able to beat switches if teams decide to use that strategy against him/them.

• The Sixers simply can’t keep getting shellacked when Embiid hits the bench. I understand that he’s a hard guy to replace, I understand that they have suboptimal options to play the minutes at center when he sits, but there’s no way they should be drowning against teams when he gets pulled off of the floor. They have enough talent outside of Embiid to hold up and even thrive in those minutes.

It’s all going to have to start with Harden, whose methodical pace combined with his diminished scoring output puts him in a weird spot as a bench leader. The ability to simply carry the offense by himself hasn’t been there, his lack of top-end burst making it hard for him to punish players in isolation the way he used to. That’s not a gigantic problem with Embiid on the floor (though it is still a problem), but it becomes a lot more important when the team is handed over to Harden and he spends most of the shot clock with the ball in his hands.

Frankly, I would argue the Sixers’ biggest enemy in the bench minutes on Thursday was simple three-point variance. The Raptors canned some absolutely ridiculous shots and had Precious Achiuwa go on an unexpected heater in the first half of Thursday’s game, including one make with him falling away from the basket late in the clock you could only shrug your shoulders at. But they didn’t help themselves a whole lot, either, with Harden at the center of some rough defensive sequences. When Danny Green was whistled for a foul after clocking a shooter on a closeout, he immediately turned and seemed to have a word with Harden, who attempted a pretty unnecessary switch instead of hanging in on Malachi Flynn.

The Sixers being a bit scattered on defense in the Harden-led minutes without Embiid is what you’d expect. It’s a much bigger deal that they look hopeless on offense for a lot of those stretches, which reflects poorly on the guy running the show. If he was anything close to the guy who won an MVP award once upon a time, they would be slaughtering teams in those minutes. They’re not even coming close.

It’s really hard to make sense of the total Harden package. You can still see the genius-level passing show up, with Harden still able to spray the ball around the floor for open shots even as he proves unable to get by anybody. But that inability to get by guys sort of devalues ​​the whole Harden experience. Guys are stonewalling him and then blocking him at the rim in isolation without any sort of help off-ball. That would have basically seemed impossible a few years ago. And while an offseason of further rest and rebuilding of strength might do him good, that isn’t going to save Philadelphia in time for a playoff run, where Harden’s high workload is only going to grow.

• This game is a good example of why I am a bit worried about Georges Niang being one of their most important role players in a playoff series. He had nowhere to hide out there on defense, and though I’m not holding it against him that he was one of an entire roster of players to get cooked by Pascal Siakam, he is particularly out of his depth.

• Schematically, the Sixers are going to have to have a long, hard think about how they want Embiid to attack the Raptors if they draw them in a playoff series. Trying to get him the ball at the nail to let him operate doesn’t seem to do much for him compared to games against other opponents. Toronto can dig down on him with their length without straying too far from their matchups on the perimeter, forcing Embiid to play in or through a crowd in order to get where he wants to go.

Dealing with the pressure was a mixed bag for Embiid on Thursday, and he got himself into trouble at times by doing a bit too much dribbling with the Toronto swarming him in the middle of the floor. Some of his best possessions didn’t end with him finishing plays, but throwing passes over the top for cross-court assists to guys in the corner. Shake Milton was the beneficiary on a couple of those plays, waiting with open arms as Embiid used Toronto’s pressure against them.

Keeping him in that mentality is going to be critical against a lot of the better defenses in the playoffs. Embiid has to remain focused on making the right plays and not always throwing on the cape in an attempt to be the hero.

• Tip your cap to Pascal Siakam after that performance. The Sixers often did everything they could to keep him from getting to good spots, and he hit tough jumper after tough jumper anyway. Nothing you can do.

• Few makeup calls have been more obvious than the one that went against Embiid midway through the third quarter. At least try to disguise it, man.

• To his credit, Doc Rivers gave Paul Reed a chance to play the backup center minutes against an opponent where he makes a bit of sense as their option there. Toronto is a long, athletic team that kills you with activity, and Reed fits in that style of game when he’s dialed in.

Narrator: he was not dialed in to start his minutes on Thursday.

He looked every bit like a young, inexperienced player with a little too much energy in a rare spot to play, falling down on one offensive possession and dribbling the ball off of a Raptors player in the backcourt for an avoidable turnover. But Reed was able to recover, using his activity to pick up a couple of offensive rebounds, including one that he turned into an and-one finish to the delight of his teammates.

The problem is less about Reed than it is about putting yourself in a spot where he hasn’t worked out those jitters over regular playing time. I genuinely don’t know and can’t say whether Reed is going to be playable in the postseason, and that’s something we should have some sense of by now.

• The good news for the Sixers is that they might have to play this team in the playoffs as a result of the loss. Oh wait, that’s not good news at all.