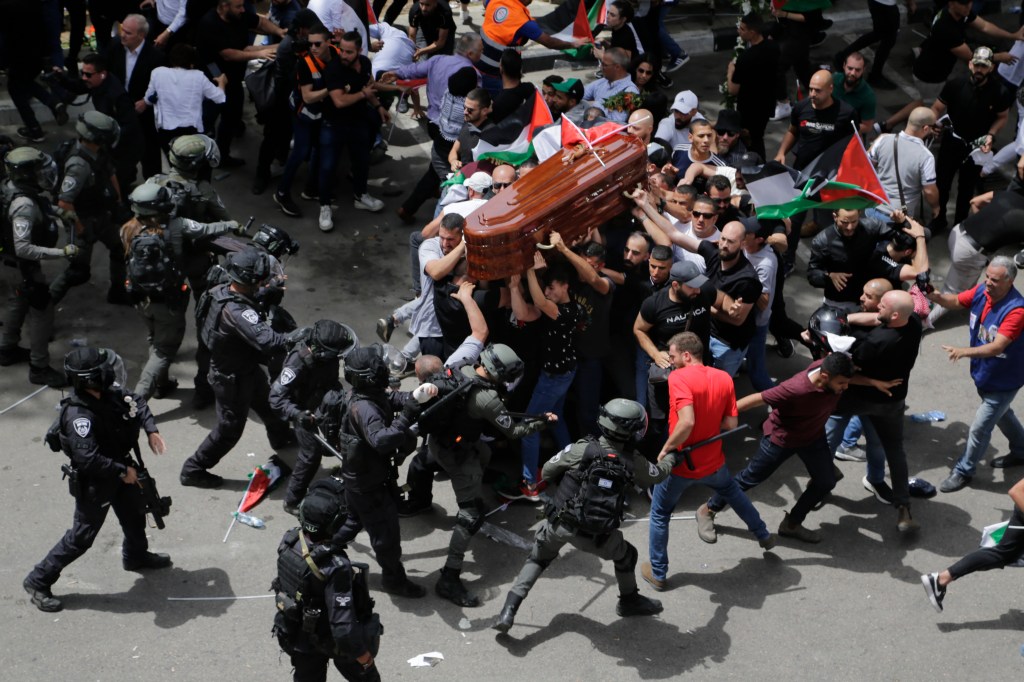 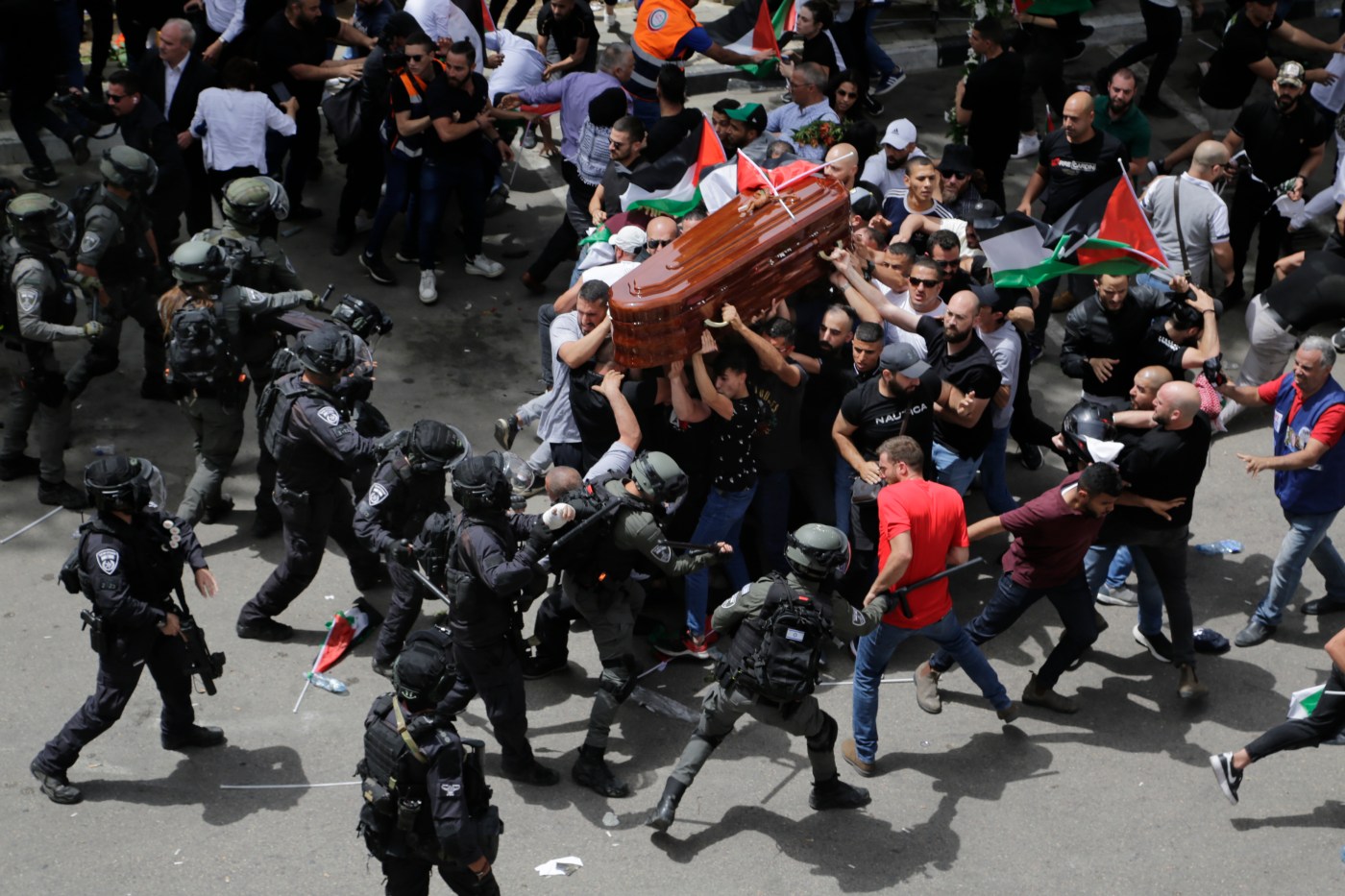 JERUSALEM (AP) — Israeli riot police pushed and punched pallbearers at the funeral of murdered Al Jazeera journalist Shireen Abu Akleh on Friday, causing them to drop the coffin briefly in a shocking start to a procession that culminated in perhaps the biggest display of Palestinian Nationalism in Jerusalem in a Generation.

The violent scenes likely added to feelings of sadness and outrage in the Arab world following the death of Abu Akleh, who was killed by Israeli forces on Wednesday during an attack on the occupied West Bank, according to witnesses. They also illustrated the deep sensitivities about East Jerusalem – which is alleged by both Israel and the Palestinians and has led to repeated acts of violence.

Abu Akleh, 51, was a household name in the Arab world, synonymous with Al Jazeera’s coverage of life under Israeli rule, which is well into its sixth decade and has no end in sight. A 25-year veteran of the satellite broadcaster, she was revered by the Palestinians as a local hero.

Late Friday, the Palestinian prosecutor said preliminary findings show Abu Akleh was killed by deliberate fire from Israeli troops. The prosecutor said the investigation would continue. The Israeli military said earlier Friday that she was killed in a firefight with Palestinian militants, and that it could determine the source of the shot that killed her.

Thousands of people attended the funeral, many waving Palestinian flags and chanting, “Palestine! Palestine!” It would be the largest Palestinian funeral in Jerusalem since Faisal Husseini, a Palestinian leader and scion of a prominent family, died in 2001.

Before the funeral, a large crowd gathered to escort her coffin from a hospital in East Jerusalem to a Catholic church in the nearby Old City. Many of the mourners held Palestinian flags and the crowd began to shout, “We sacrifice our souls and blood for you, Shireen.”

Shortly afterwards, Israeli police intervened, pushing and clubbing mourners. As the helmeted riot police approached, they hit porters, causing a man to lose control of the coffin as it fell to the ground. Police tore Palestinian flags from people’s hands and fired stun grenades to disperse the crowd.

Al Jazeera correspondent Givara Budeiri said the police’s actions resembled the killing of Abu Akleh again. “It seems her voice is not quiet,” she said during a report.

East Jerusalem, home to the most important Jewish, Muslim and Christian holy sites, was taken by Israel in the Middle East War of 1967. It claims the entire city as its eternal capital and has annexed the eastern sector in a move that is not recognized internationally.

The Palestinians claim East Jerusalem as the capital of a future independent state. Israel routinely cuts out any form of support for the Palestinian state. The conflicting claims to East Jerusalem often spill over into violence, sparking an 11-day war between Israel and Gaza militants last year and recently sparking weeks of unrest in the city’s most sensitive holy site.

Outside of prayers at the Al Aqsa Mosque, Israel rarely allows large Palestinian gatherings in East Jerusalem and routinely blocks any expression of support for the Palestinian state.

Shortly before midnight, Israeli police released a second statement claiming they had plans with the family to place the coffin in a vehicle, but that a “crowd threatened the driver of the hearse and then set the coffin in an unscheduled procession. ” It said police intervened “so that the funeral could proceed as planned in accordance with the wishes of the family.”

The police’s claims could not be immediately verified. Earlier this week, Abu Akleh’s brother had said the original plans were to move the coffin from the hospital to the church in a hearse, and that it would be carried through the streets to the cemetery after the service.

Al Jazeera said in a statement that the police action “violates all international standards and rights”.

“Israeli occupation forces attacked those mourning the late Shireen Abu Akhleh after storming the French hospital in Jerusalem, where they severely beat the shroud bearers,” the report read. The network added that it remains committed to breaking the news and will not be deterred.

The focus should be on “marking the memory of a remarkable journalist who lost her life,” Psaki said. “We regret intruding into what should have been a peaceful procession.”

At a Rose Garden event, US President Joe Biden was asked if he condemns Israeli police actions at the funeral, and he replied, “I don’t know all the details, but I know it needs to be investigated.”

UN Secretary-General Antonio Guterres “was deeply disturbed by the clashes between Israeli security forces and Palestinians gathered at St. Joseph Hospital, and the behavior of some police officers who were on the scene,” his deputy spokesman said in a statement. Farhan Haq.

Israeli police eventually escorted the coffin in a black van and tore Palestinian flags from the vehicle as it headed for the church.

“We die for Palestine to live!” crowd chanted. “Our beloved home!”

Later they sang the Palestinian national anthem and chanted “Palestine, Palestine!” before her body was buried in a cemetery outside the old town.

Her grave was decorated with a Palestinian flag and flowers. Palestinian Ambassador to the UK, Husam Zomlot, and Al Jazeera bureau chief Walid Al-Omari laid flowers on the grave.

Salah Zuheika, a 70-year-old Palestinian, called Abu Akleh “the daughter of Jerusalem” and said the huge crowd was a “reward” for her love for the city.

“We already miss her, but what happened in the city today will not be forgotten,” he said.

She was shot in the head Wednesday morning during an Israeli military strike in the West Bank city of Jenin.

In preliminary findings released late Friday, the Palestinian prosecutor disputed the army’s claim that Abu Akleh was caught in crossfire. The prosecutor said that at the time she was shot, only Israeli troops were firing, with the closest troops about 150 yards away.

The report said Abu Akleh was shot intentionally, citing marks on the tree next to where she was hit, which the prosecutor said indicated the shots had been fired directly at her. It said the shooting continued after she was hit, hindering first aid efforts.

Earlier Friday, the Israeli military said it could not determine who was responsible for her death without a ballistic analysis.

“The conclusion of the interim investigation is that it is not possible to determine the source of the fire that struck and killed the reporter,” the army said.

Israel has called for a joint investigation with the Palestinian Authority and for the bullet to be handed over for forensic analysis to determine who fired the deadly bullet. The PA has declined, saying it will conduct its own investigation and send the results to the International Criminal Court, which is already investigating possible Israeli war crimes.

Reporters who were with Abu Akleh, including one who was shot and wounded, said there were no clashes or militants in the immediate area. They were all wearing protective gear that clearly identified them as reporters.

The PA and Al Jazeera, which has long had a tense relationship with Israel, have accused Israel of deliberately killing Abu Akleh. Israel denies the charges.

Rights groups say Israel rarely follows through on investigations into the killing of Palestinians by its security forces and imposes lenient sentences on the rare occasions when it does. However, this case received a lot of attention because Abu Akleh was a well-known and also an American citizen.

Palestinians from and around Jenin have carried out deadly attacks in Israel in recent weeks, and Israel has made almost daily arrests in the area, often sparking firefights with militants.