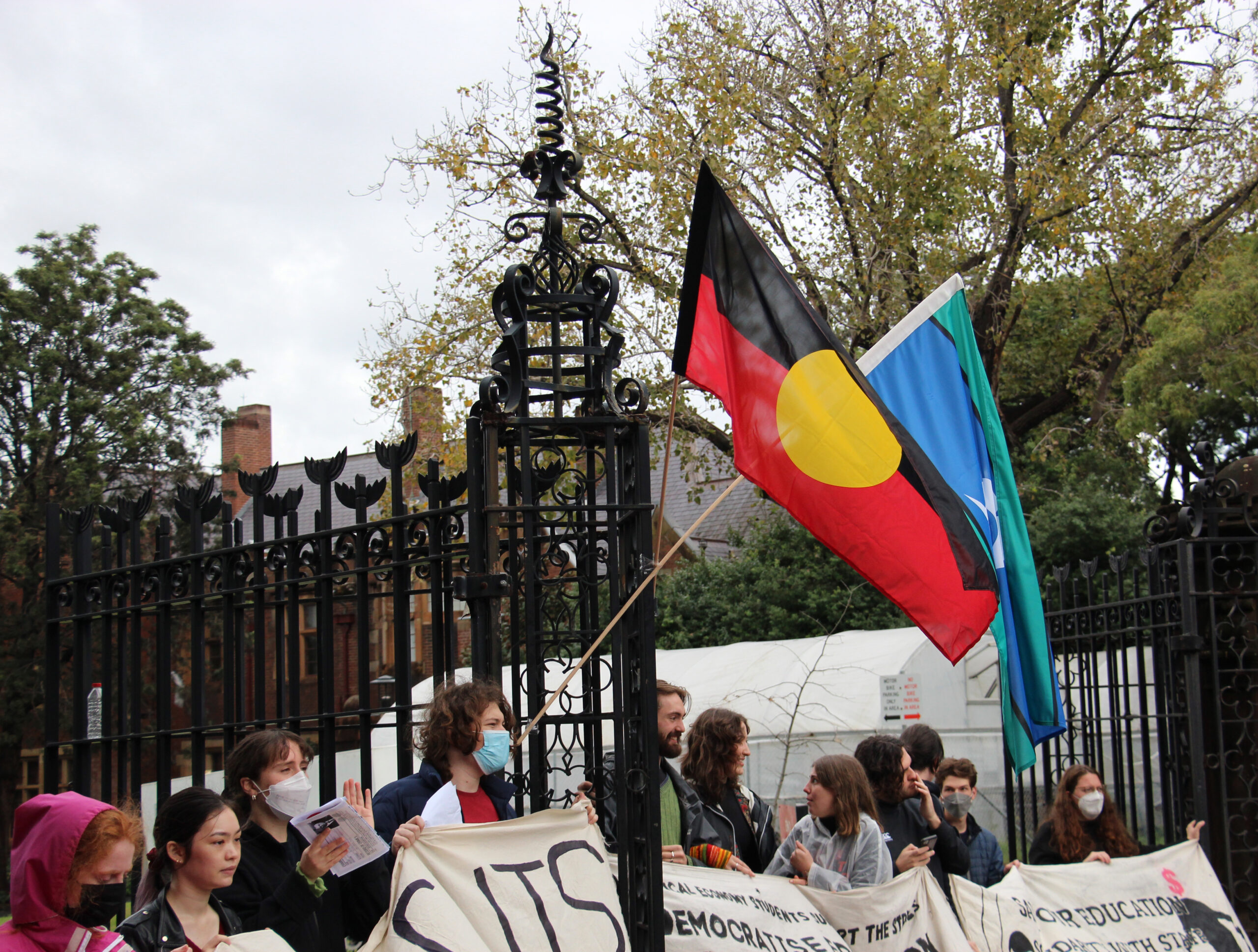 University of Sydney staff went on strike today for the third time this month. This is the first time an NTEU department has gone on strike with a specific focus on the labor rights of Aboriginal and Torres Strait Islander people.

Pickets were placed at seven entrances to the Camperdown campus, preventing anyone from entering the grounds. As with the strikes earlier this month, there were left-wing chants and chants on the pickets, with activists scrambling to speak to people and cars as they attempted to enter campus.

NTEU USyd branch president Nick Riemer told: Here on the need to strike after a meeting between the NTEU and the university board: “We offered them to move last week to avert the strike, but they flatly refused. They’ve had ample opportunity to listen to and respect the staff, and they’ve shown it’s just not on their agenda. So we’re going to strike again.”

There were also students from other universities who supported the strike, pointing to campus concerns about the problems facing university staff. Guy Suttner, a UNSW student who was on the picket line, said that “every university faces the same problems. Excessive nonchalance and staff that are treated badly… eventually students suffer in the end, so we need solidarity between universities”.

Employees on the picket lines expressed their dismay at the precarious conditions under which temporary staff work at the university, especially given the intensification of work over the past two decades.

Senior Lecturer and Chair of the Theater and Performance Studies Department Paul Swyer spoke with Here of his discomfort at the way temporary staff are often contracted on a “just in time” basis. This creates serious cash flow crises for the workforce and has prompted Dwyer on several occasions to offer his causal colleagues an interest-free loan while they await payments from the university.

“If you’re having trouble making rent, I can give you a loan…and we can sort it out later,” he said.

“That [I have to do that] it’s a joke. That’s a joke. You know, this is such a rich institution.”

Dwyer also addressed the slow decline of the 40:40:20 work model, which guarantees academics they have time to do research. On the pedestrian bridge he asked who could spend two days (40 percent of the week) on research. No one raised their hand, but one replied, “That’s what the holidays are for.”

At the City Road picket, Here spoke with academic and former chair of the NTEU USyd department Kurt Iveson of the School of Geosciences. He stressed that management’s erosion of the 40:40:20 model sent the message that academia is the domain of the elite.

†[It communicates] that academia is for people who have the free time to do it, to do it on the weekends, and people who don’t have that luxury don’t fit in the institution,” Iveson said.

“What kind of diversity of teaching staff can we have, if those people who have community responsibilities, have caring responsibilities, and actually want to actively contribute to civil society can’t do anything but their job?” he said.

The strike comes the morning after the university’s 2021 annual report revealed a $1.04 billion surplus, equivalent to 25,000 average Australian salaries, and marks a dramatic increase from $106 million last year. The RUG’s operating expenses also fell by 2.2 percent due to a reduction in personnel costs.

Addressing the crowd that gathered on City Road, made up of gathered pickets from all over the university, Nick Riemer denounced the university’s surplus: “That huge pot of gold has come at the same time that staff-student ratios have plummeted. , the classrooms are busier … that surplus has come from the backs of you and me, friends.”

“This university is awesomely rich and can afford the real and reasonable claims we make in business negotiations,” he said.

USyd SRC Secretary General Grace Lagan emphasized the importance of these findings to the work that activists do. “We had disclosed a billion dollar surplus in Here yesterday, and the university is still refusing to meet staff demands,” she said.

She also spoke this weekend about the results of the federal elections as proof of the collective power of students.

“The weekend showed that when students organize and vote en masse, they can secure left-wing governments… they should feel really encouraged to come out and get victories on every campus.”

Early in the day there was an incident on the New Law picket, which involved an aggressive interaction between strikers and strikebreakers (known as scabs).

A former USyd student at the picket, who wishes to remain anonymous, described the two incidents. The first involved a mother and son who were “very determined, very angry” and tried to physically force themselves through the picket.

“The son pushed me and my friend against the railing and also hit my friend in the teeth,” said the striker.

A second incident saw a student from another university, who was about to take a Zoom exam in the library, making threats against the picket. “She was very threatening; we managed to send her away, but she said, ‘I’ll kill you, I’ll beat you up, I’ll kill you,’” the striker said. Here.

The individual pickets gathered in the pouring rain after midday for the F23 for speeches.

Nick Riemer opened the rally and told the crowd: “I want to pay tribute to Aboriginal colleagues and comrades. Always was, will always be Aboriginal land.”

Jeremy Heathcote, an Indigenous member of the union’s USyd Branch Committee, spoke about the importance of cultural safety on campus. “A few years ago, [Aboriginal] people wouldn’t walk through this campus because they didn’t feel comfortable.”

“This university shows no commitment to supporting our agenda: to increase our numbers, provide cultural support and recognize our cultural charge.” He said changing this means embedding Aboriginal ways of knowing, being and doing into the life of the university itself.

While Indigenous people make up 3 percent of Australia’s population, only one USyd faculty – the Faculty of Medicine and Health – has implemented this in its teaching staff. The number of Indigenous employees at the university fell from 86 to 80 between 2020 and 2021, meaning the proportion of Aboriginal and Torres Strait Islander employees has now fallen below one percent.

Heathcote noted that while many Indigenous staff were in attendance, many others were too scared to come because of the university administration.

The next speaker was Gamilaraay woman and NTEU member Tracey Cameron, who works in the Sydney School of Education and Social Work and teaches Gamilaraay language. Cameron argued for the importance of a greater number of Indigenous staffers in permanent positions and for cultural security in the university environment.

“I’ve been casual for almost a decade and I just got a steady job, but it took a lot of work and a lot of support from people I work with to do that,” said Cameron. “Many other casuals I work with have not been won [job permanency] and have gone elsewhere.”

USyd NTEU Branch Committee Casuals Representative Dani Cotton then discussed the implications of job insecurity for First Nations personnel. Only 15 percent of staff in First Nations-identified positions are on permanent contracts, compared to 25 percent of all university staff.

“You’d think if she… [University management] caring about … the structural racism, the individual racism that people experience at this university, they would give safe jobs to the positions identified by the First Nations,” she said.

Management has exacerbated wage theft in college by reducing administrative hours for staff, including lectures and sending emails to students, by making payments for only 4 hours of work per semester, while the total load usually exceeds this number. far exceeds.

“A casual one told me that was his rent money… Those kind of hours mean everything to us and it means nothing to them, and they’re sitting on billions.”

“I don’t think anyone can say that our learning conditions have not been affected by these changes,” Perkins said.

You can donate here to the NTEU strike fund to ensure the viability of the ongoing union actions at the university.