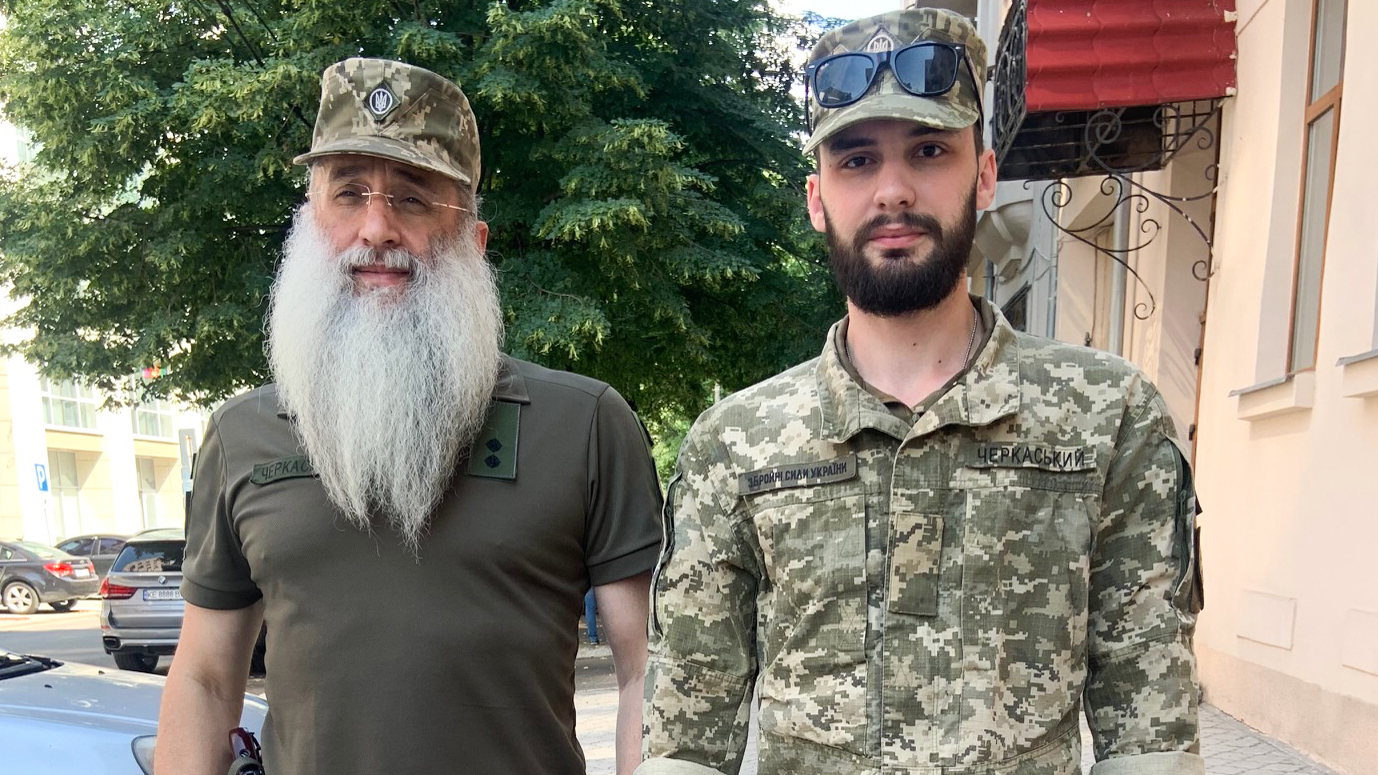 Asher and David Cherkaskyi, Ukrainian Orthodox Jews who are father and son and who have both been on the front lines in Ukraine’s struggle against the Russian occupation, in Dnipro in July.

Asher and David Cherkaskyi, Ukrainian Orthodox Jews who are father and son and who have both been on the front lines in Ukraine’s struggle against the Russian occupation, in Dnipro in July.

For Ukrainian Orthodox Jews Asher and David Cherkaskyi, a father and son who both fight at the front in the eastern Donbas region, defeating Russia has become especially important to them because of their faith.

While Russian President Vladimir Putin falsely claims that his army is “liberating” Ukrainians from a Nazi regime, the Cherkaskyis say it’s quite the opposite – they say Ukraine is fighting the evils of a fascist dictatorship in Moscow.

NPR met with the father and son in July and spoke to them again by phone in September as Jews around the world celebrated Rosh Hashanah, the Jewish New Year, and prepared for Yom Kippur, the Day of Atonement, which begins Tuesday evening.

Asher, 52, remembers what it was like to be Jewish in the Soviet Union.

“If you said you were Jewish you would be demoted in school. And if you fought in the army you wouldn’t get a medal no matter how brave you were. You would just be sent to the most dangerous places,” he says . “I remember the anecdotes and propaganda to humiliate and intimidate us. Jews and other nationalities were considered inferior. In the Soviet Union, only Russians were good enough to rule.”

He says that the Soviet Union was a country of fear and violence and that it still is in the Russian Federation.

David Cherkaskyi, 20, has known only an independent Ukraine, which declared independence in 1991. “Ukraine is a completely free country,” he told NPR. “You can do whatever you want here. You can go to church, you can be Muslim or Jewish, it’s no problem.”

Both men say they are proud of the Jewish president of Ukraine, Volodymyr Zelenskyy.

NPR met the Cherkaskyis in their town of Dnipro just hours before David was due to go to the front in the Donbas. The city has a large Jewish population and one of the world’s best sofruts, a center of religious calligraphy where the Torah and other Jewish parchments are engraved by hand.

Itskhak Maltsev writes a Torah in July at the Menorah Cultural and Business Center in Dnipro.

Itskhak Maltsev writes a Torah in July at the Menorah Cultural and Business Center in Dnipro.

Asher says he first started identifying as a Ukrainian Jew in 2014, during the Russian occupation of Crimea, where his family lived. He remembers the trumped-up referendum on unification with Russia.

“Many buses arrived with Russian citizens voting to leave Ukraine and join Russia. We knew we couldn’t go along with this. It went against our conscience, our values ​​and our loyalty to our Ukrainian fellow citizens. “

So they fled, leaving behind his business and their home. He joined a volunteer unit in Dnipro, where he did several missions in the Donetsk region.

Asher Cherkaskyi says the so-called voting process the Kremlin just organized in an attempt to justify the seizure of four Ukrainian regions was even harsher and more cynical than the Crimean referendum.

But he says Putin’s move to hire hundreds of thousands of new soldiers “through deception” – who Cherkaskyi says are “unprepared, coerced and intimidated” – does not hurt Ukrainian soldiers’ morale in the least.

“We defend our country, our homes, our families and our children. So how can it affect us?” he asks.

Ukraine launched a major counter-offensive in September, retaking areas in the northeast and south of the country. And Russian forces have now suffered another battlefield defeat in one of the regions that Putin declared Russia had supposedly annexed Ukraine.

Cherkaskyi says the Ukrainians have the Russians on the run and will continue to drive them out of ‘our country’. He says that Russian elite units have been killed and that the Russians no longer have the weapons they fought with at the start of the war.

Since their recent communication with NPR, both father and son are still fighting in the Donbas.

But this past Rosh Hashana, Asher says they could celebrate as usual, with blessings, apples and honey. And, he says, they said a “prayer for the light to overcome the darkness that is approaching Europe and the whole world from the Russian Federation.”