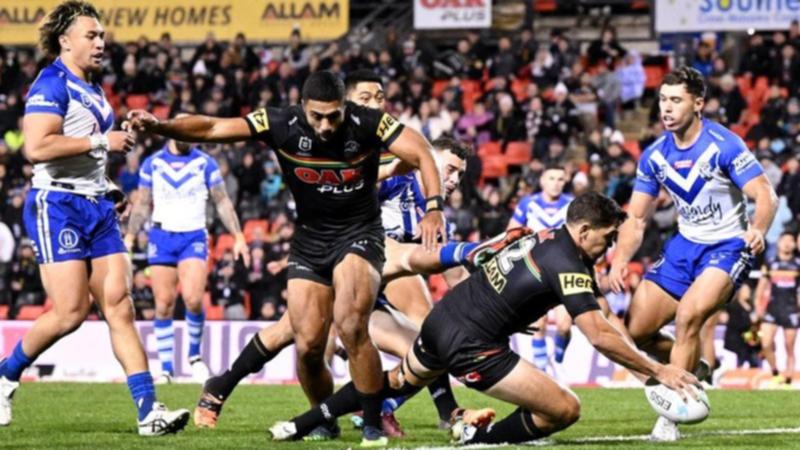 Viliame Kikau has come on the plate for a Penrith squad that has been decimated by Origin calls to lead the Panthers to a 30-18 win over Canterbury.

Last year around this time, Ivan Cleary’s men were upset by Wests Tigers, but even without their core squad, Kikau made sure the majority of 16,906 fans left BlueBet Stadium satisfied.

The Fijian back rower has agreed to move to Canterbury next year and showed his future teammates exactly what they are currently missing.

Not ruining the Bulldogs’ offense with his cracking defense, he cleared loose balls in in-goal and even found time to blast past three defenders to score a first half try.

The win puts Penrith four points ahead of the top of the NRL ladder.

There were some glimmers of hope for Canterbury, who made a comeback in the second half and at one point threatened to claim just their third win of the season.

In the week he was dropped by Fittler for the first time since debuting for the Blues in 2018, Josh Addo-Carr picked up a brace, paired up with five-eighths Matt Burton on both occasions.

Burton scored a try himself against his old club and his trap play was especially troubling to the back three of the Panthers.

Penrith started quickly with Chris Smith and Dylan Edwards giving them a 12-0 lead in the 15th minute, with Taylan May and Kikau strengthening their lead at half time to 22-6.

Canterbury’s lone attempt in the first half came when Edwards dropped a Burton bomb while Addo-Carr dove on a grubber in the next set to open his account for the night.

Addo-Carr added a second as Burton shot across the Panthers’ defensive line to allow the winger to rally and run 60 yards to score, before the latter crashed to cut the Panthers’ lead to just four points.

An attempt to exchange forward Jaeman Salmon and a penalty from debutant Kurt Falls left Penrith regaining control and Canterbury unable to react.