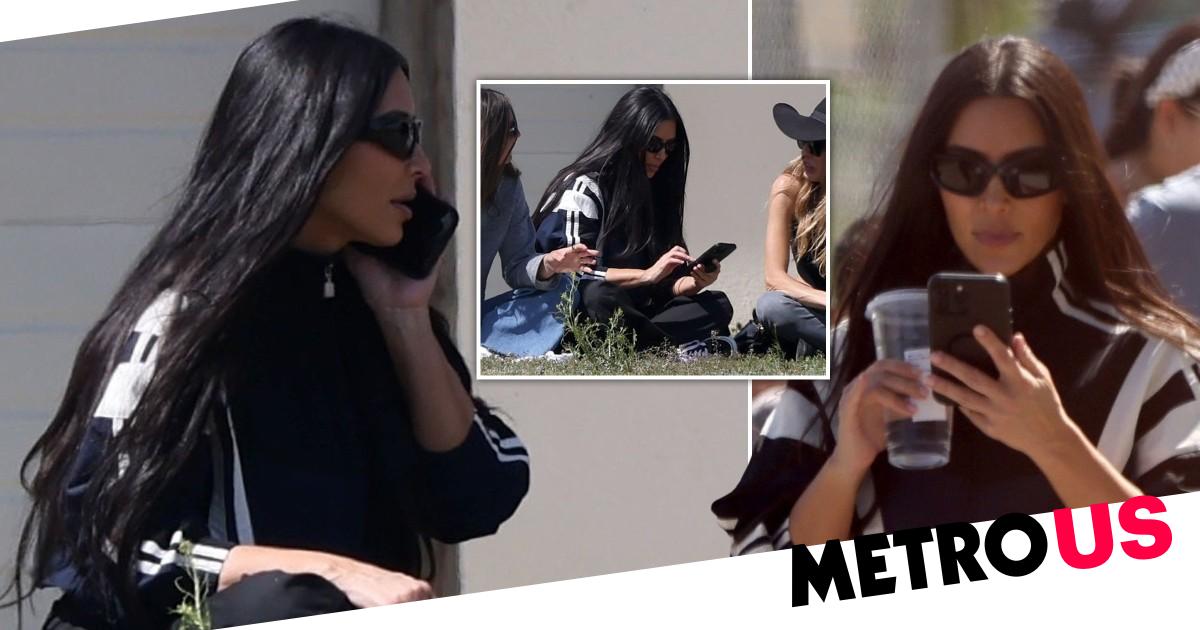 Kim Kardashian couldn’t keep her eyes off her phone as she went to support son Saint at his game, along with daughter North and a few friends.

The reality star was seen texting just hours after texts between boyfriend Pete Davidson and her ex Kanye West were shared on social media.

Ever the expert in casual chic, the KUWTK star donned a pair of black cargo trousers and sporty jacket.

Never without her sunnies, Kim accessorised with oversized shades and wore her brunette locks in a sleek and straight do.

She sat cross-legged on the sidelines with her daughter and friend’s children as they kept themselves entertained and chatted away.

Kim shares North, eight, Saint, five, Chicago, three, and Psalm, two, with Donda rapper Kanye, 44, and she’s been caught in the middle of historic beef as of late.

Pete, 28, who has maintained his silence for months as Kanye publicly attacked him, recently called Kanye out on his concerning behavior.

The gold Digger hitmaker originally posted a series of now-deleted videos, revealing that Kim’s new beau sent him a string of text messages, including a photo of the actor allegedly lying bed with the reality star.

Hitting out at Kanye, the SNL comic retaliated: ‘Kim is literally the best mother I’ve ever met. What she does for those kids is amazing and you are so f***ing lucky that she’s your kids moma.’

He went on to say: ‘I’ve decided I’m not gonna let you treat us this way anymore and I’m done being quiet. Grow the f**k up.’

Pete suggested the two meet and discuss matters in private together saying: ‘I’m in LA for the day if you wanna stop being a little internet bitch boy and talk.’

He continued by reminding Kanye: ‘You don’t scare me bro. Your actions are so petty nd embarrassing. It’s so sad to watch you ruin your legacy on the daily.’

Kanye and Pete have been locked in a public battle since the comedian began dating Kim in October, several months after she filed for divorce from Kanye.

The couple married in a lavish ceremony in 2014, with the Skims founder being declared legally single again this year.

MORE : Kate Beckinsale bigs up daughter Lily Sheen on role as Nicolas Cage’s child in ‘bonkers and amazing’ new film: ‘So proud of you my brilliant baby’