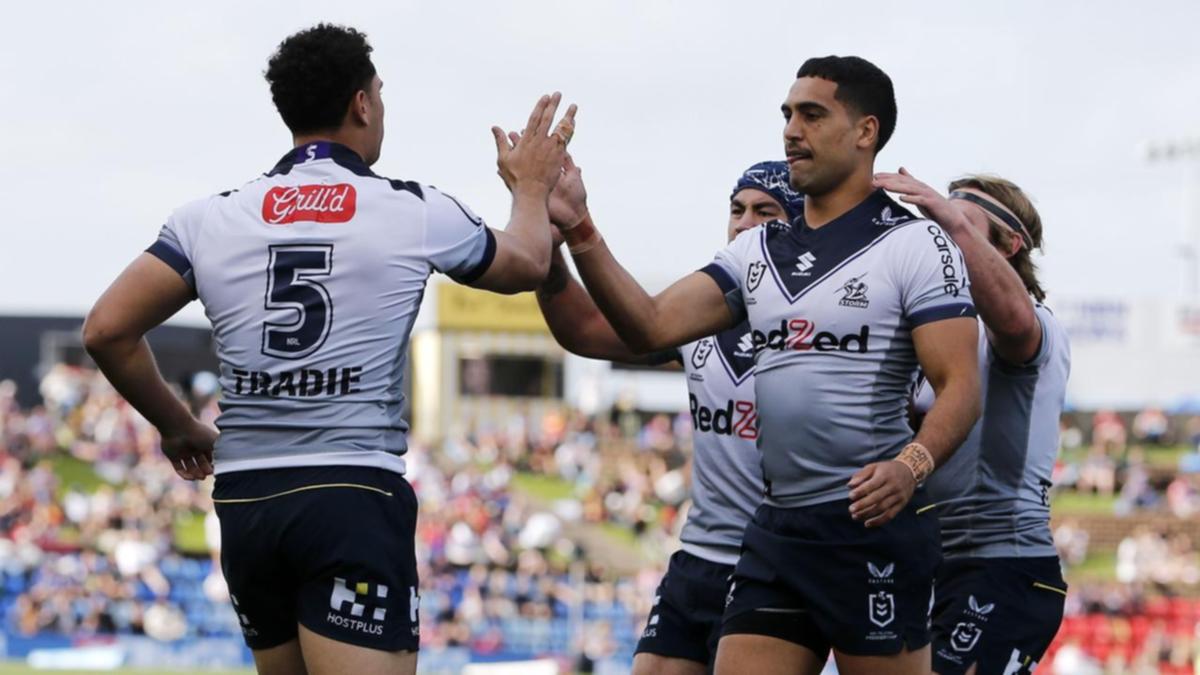 Melbourne has hurt hapless Newcastle even more, thrashing the Knights 50-2 and condemning Adam O’Brien’s men to the last spot on the NRL ladder.

On another sad afternoon for Newcastle, halfback Jake Clifford was hooked after 53 minutes in the worst lost in O’Brien’s tenure as Knights coach.

While Clifford eventually returned via an HIA for Tex Hoy, there was never any sign of life for the hosts as they failed to break the storm line even once.

Melbourne’s demolition work made them just the sixth team in history to score 120 points in two weeks, backing up the Warriors’ 70-10 demolition on Anzac Day.

While the Warriors were able to rebound this week, there is no light for the Knights after their sixth loss in a row.

A week after O’Brien apologized for their poor loss to Parramatta, the Knights were arguably worse from the start on Sunday.

They fired the opening kick-off, trailing 10-0 when they first got their hands on the ball in the 12th minute, completing just 15 sets and committing 13 errors.

Their only points came from a penalty as they trailed 26-0 just before half-time.

Characteristic of the afternoon was that in the first game of the second half, Newcastle saw a kick-off from Storm die to transfer possession.

Xavier Coates had another field day on the right wing for Melbourne with his hat-trick, making seven tries in two games, while Harry Grant set up three tries from the dummy half.

Cameron Munster had a hand in two tries and scored one himself, while the Storm again made light work of the Knights’ weak right flank defense and Justin Olam claimed a double.

No better was that dominance as Olam shook off four defenders in the run-up to his second attempt, having crossed over for Melbourne’s first attempt with ease.

Coates, meanwhile, had far too much pace for Newcastle and tried halfback Jahrome Hughes when he stepped back from the field after a nasty final tackle.

In comparison, the Newcastle halves struggled.

Adam Clune struggled with a knee injury, while Clifford had a dog for a day from his opening kick.

He later went full throttle after the Knights’ first offense set, as he and Clune ended up with seven missed tackles between them.

Newcastle had already suffered a serious injury, losing Sauaso Sue to a concussion in the fourth minute, while Hoy was also injured late and Kalyn Ponga appeared to be carrying his right arm.

It dropped the Knights under Canterbury to sit at the bottom for the first time since their last wooden spoon in 2017.