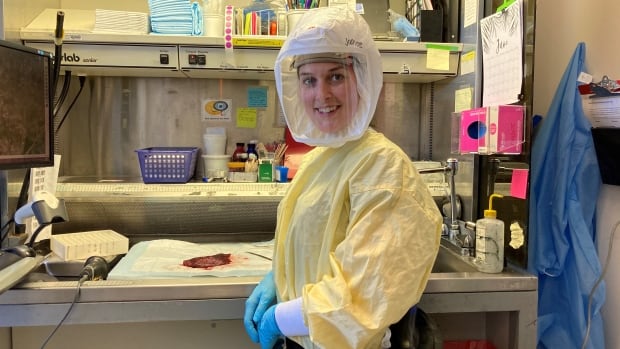 In Halifax’s pathology department, a doctor works in a room with a pipe dripping into a bucket.

In another room, the staff wear expensive safety suits to protect themselves from toxic fumes due to ventilation problems.

The head of pathology, located in the Mackenzie Building on the Victoria General site, says their crumbling infrastructure is endangering patient care.

The pathology lab is a crucial but often overlooked part of healthcare, says Dr Laurette Geldenhuys.

Her concerns are reflected in a Nova Scotia Health review, which also warns that the state of lab facilities is failing.

The team processes about 100,000 samples a year for patients across the Atlantic. While the amount of work is enough to be overwhelmed, building issues are pushing the team to the brink, Geldenhuys says.

“As the pressure continues to mount, no degree of collegiality will make up for it,” she said of the stress placed on her team. “I’m concerned if we start losing pathologists. If people resign, it’s going to have a negative spiral effect.”

She says there have been several floods. One was “within inches” of sensitive equipment in the lab that processes cancer samples.

In another office, “a pipe comes out of the ceiling into a big bucket of water and it’s beyond repair. So the pathologist has to work under those conditions.”

Geldenhuys says her team is constantly concerned about more flooding.

“That can have a very significant negative effect on patient care. So it really is a disaster waiting to happen.”

Geldenhuys’ concerns are expressed in a review of the department that was published in March. It states that “there are significant structural concerns about the Mackenzie building” with “potential for serious disruption to service”.

The ventilation system in the building also leaves much to be desired, says Geldenhuys. Some personnel are required to wear bulky safety equipment to protect themselves from toxic fumes.

“They have to wear these suits with… a hood and a special filter that costs a lot of money. That’s completely non-recyclable. They just go in the trash,” she said.

Geldenhuys says they’ve been working with Nova Scotia Health engineers for years to come up with a solution, but any improvements will be years away.

The pathology department hoped there would be a permanent solution in the future as they expected to be part of the QEII redevelopment project.

Not included in redevelopment plans

The Halifax Infirmary expansion includes the relocation of nine operating theaters from the Victoria General site to the new facility. The pathologists work closely with the surgeons and often transport samples back and forth as part of their job.

Geldenhuys says he was shocked to hear that pathology will be permanently housed in the Mackenzie building.

“This means that the highly specialized subspecialists should drop everything they do, go all the way to the HI, have their say and come back,” she said, adding that a specimen is more likely to be lost. †

Nova Scotia Health has turned down several requests for an interview about the concerns. Instead, it sent statements that didn’t explain why pathology isn’t being moved.

“Nova Scotia Health and the Government of Nova Scotia continue to evaluate health care infrastructure needs and are committed to modernizing and upgrading facilities across the province,” the statement said.

“The Mackenzie Building is part of these ongoing discussions.”

The health authority also sent a five-year plan for maintenance work on the Mackenzie building. It included new windows and work on the heating, ventilation and air-conditioning systems, but it didn’t say whether those projects would directly address the concerns of the pathology department.

The assessment of the pathology department also covered the outdated computer system, which relies on Windows 7 operating systems.

Geldenhuys says it’s so unreliable that some pathologists have resorted to manually typing out their lengthy reports rather than dictating them.

“That takes forever,” she said. “Then you have to read it over and over to make sure you’re not making any typos. It’s really frustrating.”

Nova Scotia Health said in a statement that 84 percent of the health authority’s computers have been upgraded to Windows 10. It expects the entire network — including pathology — to be ready by the end of the year.

Faced with all these challenges, Geldenhuys says that employees suffer from burnout. She says they stay because they have a great sense of camaraderie, but that can only go so far.

She says both sides of the department — pathologists and technologists preparing the samples — are working overtime to stay afloat and process samples within an acceptable time frame.

She says they don’t have time to learn new testing methods that could help determine whether patients can take newly developed drugs. Some of those samples are sent to other labs.

“There are other areas that suffer, but patient care is a priority so for the most part, as far as we can, we’ll just keep doing that,” Geldenhuys said.