Lismore Mayor Steve Krieg has been a rock for his community.

But behind the scenes, he is grappling with the same devastating loss as many people in his community.

Mr Krieg returned to his home and business to discover he had lost almost everything to floodwaters. 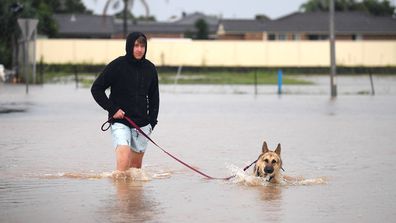 When he first walked into his food business, he was hit by a strong smell, which was the result of a lack of power to his coolroom and freezers.

“Only five years ago to the month that we were affected by a major flood.

“We thought we had done everything right to prepare for this one.

“A lot of bad things happen to pretty good people.”

Mr Krieg said he would have a “good bawl for half an hour or so to take it all in”.

He is one of the many who have been reduced to tears as they process their losses and the road to recovery that lies ahead.

“I’m just one of many, many thousands and thousands of people.

“There are hearts broken like mine all over this city, but we’ll come back, we’ll bounce back.”

Olivia Brown “can’t even put into words” what the last few days have been like for her and her neighbors in the NSW town of Coraki.

“Monday was honestly the most traumatic day of all of our lives, saving what we could, leaving behind what we knew and just getting to safety,” she said.

“Just trying to save ourselves, really.

“But we’re alive and that’s all that matters.”

Ms. Brown was up all night watching the local river.

Her mother is a vet and she was away at work.

As a result, Ms Brown was home alone with her two younger siblings and the many animals on the property.

“Within half an hour I was up to waist-deep water trying to save what animals I could because we do have a lot of animals.

“We were stuck for roughly five hours, just waiting, trying to call (for help). We had no reception to call Triple Zero or SES or anyone really.

“We just honestly didn’t think we would survive but luckily a nearby SES boat saw us.

“We eventually got to Coraki to an evacuation center on a little strip of land that nearly went under. I was there for three days.”

The clean-up is underway in Lismore as floodwaters recede, with the death toll expected to rise as crews search ravaged homes.

Four people are confirmed dead after the town experienced the worst flooding in its history.

There are currently half a million people across the state who are subject to evacuation orders and warnings.

The Clarence Valley town of Maclean is urgently preparing to be impacted by floodwaters.

Engineers have indicated there is a chance the town’s levee wall will fail, causing large-scale inundation throughout the town.

NSW Premier Dominic Perrottet said many people were waking up today to see “much of the state underwater”.

“It has been an incredibly difficult evening,” he said.

“I want to acknowledge the trauma and suffering that many people have gone through, throughout the evening, having to leave their homes in the middle of the night.

“But my message to you is that we will get through this.”

As flooding continues to hit homes and businesses, there are ways you can get help.

The following are support services for flood-affected individuals: