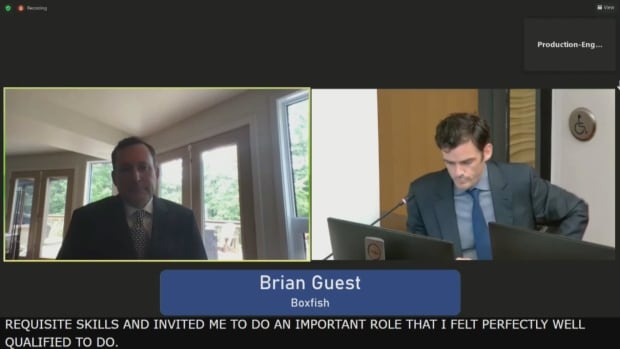 A consultant deeply involved in the planning of Ottawa’s light rail system was faced with questions during the LRT’s public inquiry Monday over whether his family and political ties led to his key role in the city’s railroad office.

Adair also found that Guest had done work for waste-to-energy company Plasco, work that Guest did not explicitly mention in the resume he submitted with the investigation, Adair noted.

Adair also explained Guest’s family ties to the city, pointing out that his sister, Robyn Guest, worked in the office of former city manager Kent Kirkpatrick, and she currently works in Watson’s office.

Also, Robyn’s husband Chris Swail was deputy city manager Nancy Schepers’ chief of staff—the city rail office replied—when Guest and his firm Boxfish were hired in 2011 to consult for the city about the LRT.

That company received $4 million from the county in 2007 when Watson was the county minister who announced the grant, and a decade ago, Plasco signed a conditional $120 million deal with the city.

Do you agree… the circumstances under which you got this contract raise at least some questions about how you got engaged?”– Attorney John Adair

The investigation on Monday found that Guest even attended meetings for Plasco, while also doing separate contract work for the city. The Schepers department also supervised waste management.

“So when you got the light rail project contract in 2011, your brother-in-law was Mrs. Schepers’ chief of staff, and your sister worked for Mr. Kirkpatrick?” asked Adair.

“And do you agree with me now, sir, that the circumstances under which you were given this contract raise at least some questions about how you came to be engaged?” asked Adair.

“Not me,” said Guest. “I mean, I see you mean that, but I don’t think there’s anything substantial in that.”

Guest and his firm, Boxfish, applied in 2011 to be added to the city’s so-called permanent offer list — a list of companies from which the city could hire companies without provoking a competition, as long as the contract is less than $150,000. was worth. Boxfish was hired on subsequent contracts for about six months at a time for just under $150,000 at a time.

The investigation found that Guest had hired approximately $600,000 for the Confederation Line’s first phase in the fall of 2013, although he and Boxfish would later sign a deal for phase 2 for up to $2 million.

Guest testified that he was invited by former railroad bureau director John Jensen to advise the city in 2011, when it appeared to have a “slave” focus on digging the tunnel along a much deeper, different route that would cost an additional billion dollars. could cost.

City officials have credited him with suggesting the tunnel travel under Queen Street, at a shallower depth.

Adair pointed to a 2013 letter Guest sent the city saying that “Boxfish innovations” would lead to prizes — innovations such as the tunnel change and helping to transfer geotechnical risk to the private partner.

But the committee’s counsel asked why the city needed Guest’s expertise when it already paid Deloitte millions for financial advice and millions more to Capital Transit Partners – including STV Inc. Aecom and Morrison Hershfield – for engineering.

Gast had no experience with public-private partnerships in 2011, Adair emphasizes. Guest explained that he had a “masterclass” from former federal procurement chief Arthur Silverman and acted as a facilitator because he knew City Hall and its policies.

“Mr. Jensen, Ms. Schepers and Mr. Kirkpatrick thought I had the required skills and invited me to play an important role that I felt perfectly qualified to do,” said Guest, adding that both his sister as his brother-in-law brought integrity to their work.

Dozens of documents were submitted as evidence during the public hearings, and on Monday, three more email chains saw about Guest.

An email chain saw Infrastructure Ontario executives react negatively to Guest when CBC reported that he had returned to Swail’s railroad office.

“It was purely because I’m a private person, I don’t like being in this kind of environment,” Guest explained to the committee, pointing out that he’s working on “$100 billion in capital projects in Toronto” through the Metrolinx provincial transport company.

Sometimes the testimony during the public inquiry comes close to the light rail lawsuits and claims currently pending in the courts.

Linda Rothstein, the lawyer for the RTG parties, drew attention to part of the Chiarelli email in which Guest wrote that the problems with the LRT were a “failure of the private sector partner to properly design and build and
maintain the system – pure and simple.”

Gast went on to say that the companies should be held accountable, adding that “it’s really worthless that this system has been unstable and the consortium has not responded well” and that RTG “should lose their shirt and that we have to default them, sue them, and spend whatever it takes to fix what’s wrong on their dime.”

Boxfish has advised the city on major construction claims, and Rothstein accused him of encouraging the city to “play hard” with RTG.

Guest said he’s been “tempered” on the subject, and hasn’t been a huge player in figuring out how to get RTG to work.

On Tuesday morning, the inquiry will hear from STV consultant Thomas Prendergast and the city’s former general manager John Manconi.